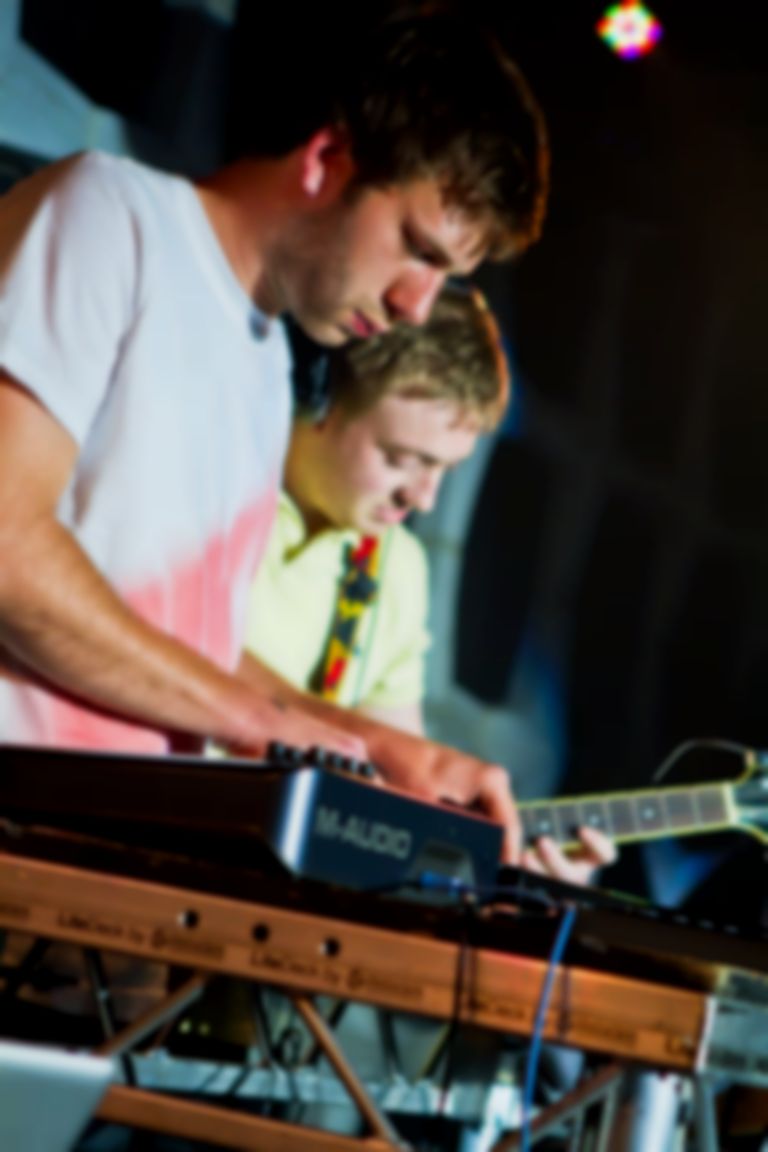 There’s a moment, or an elongated passage of music, really, on “So Many Times, So Many Ways” tonight that makes you realise just how far Mount Kimbie have come not just since the release of Crooks & Lovers in 2010, but in the six months since the release of second album Cold Spring Fault Less Youth.

That moment is the Ry Cooder low guitar twang that Kai Campos plays through most of the aforementioned track, which transforms Mount Kimbie from being just another electronic duo into an act that might be the closest thing we have to a UK version of Tortoise. While there remains an electronic, dance base to much of what the duo does, the release of their second album saw focus move away from their dubstep peers – who they may been unfairly aligned with anyway – with more jazzy song structures, vocals and tracks that were allowed to develop in an almost post-rock fashion.

And with “So Many Times”, they’ve become an altogether more fascinating group. As the song unravels on a bed of organ and live drums, with Campos repeating that thrilling guitar line while his musical partner Dominic Maker remains hunched over his bank of synths, nodding as he manipulates the organ sound, you begin to realise just how important a group Mount Kimbie could come to be in the next few years.

Yet, Campos and Maker never quite leave behind what broke them in the first place. They begin their set at Glasgow’s throbbing, pulsating SWG3 warehouse with a stunning take on “Carbonated” that begins atmospherically before descending into a club banger at the point where the sampled vocal drops, and they don’t delve in to the songs of Cold Spring until the loose and jazzy grooves of “Home Recordings” a few songs in. The horns of that track beckon in the new and improved Mount Kimbie, complete with Campos clipped, estuary vocals: you can hear Tortoise, yes, but also a bit of Fridge in the way it ambles along, adding layers of ambient noise and weaving in new synth lines and beats as it goes.

When the duo play an older track, followed by a newer one, you can hear how rather than leaving behind the sound of Crooks & Lovers, Mount Kimbie has manipulated and improved on it: the manipulated guitar feedback of the brutal “Maybes” leads into the martial strut of Cold Spring’s “Blood and Form” brilliantly and seamlessly, and it must come from having the confidence to become true front men, especially in the case of Campos who again takes centre stage with guitar and vocals like a young Bernard Sumner.

With no King Krule to take on vocal duties (a relief to those who can’t abide his vocal style) it’s left to Mount Kimbie to close with a trio of absolute belters. While “Made to Stray” shows that Campos and Maker can still write an epic dance tune, we return to the first incarnation of the band with the stunning one-two punch of “Field” and “Mayor”. These are simple, visceral pleasures: tracks to make you move and dance and feel the euphoria of a classic club night. The latter is particularly something, transforming the crowd into a sea of hands and writhing bodies, piling layers of noise until the drop finally comes, and everyone goes crazy.

We’re close to a point now where Mount Kimbie are becoming one of those acts whose every move you hang on. We’re waiting for any news of new music and what it might sound like – and that’s the great thing about where they’re heading…we just don’t know what’s coming next, but it’s sure to be thrilling.