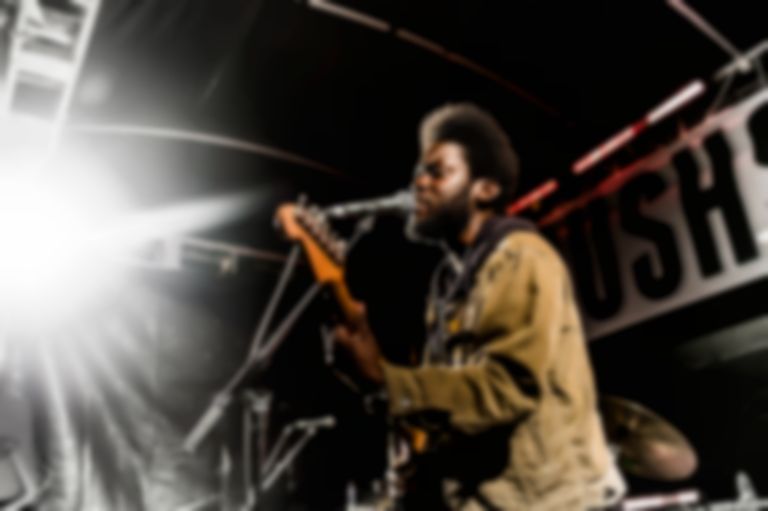 There is a sense that this year’s Love & Hate represents a more assured Michael Kiwanuka. A record full of the conviction of an artist really beginning to find his own voice - as distinct from his influences.

But that’s not the whole story. Love & Hate is also an album riddled with self-doubt and anxiety. It’s vulnerable and conflicted; hopeful and hopeless.

For an album built on the tension of those contradictions to top the UK album chart speaks volumes about the current shit show that is modern life. Of course it also speaks volumes about Kiwanuka’s talent, as does tonight’s (11 October) sold out show at London's Shepherd's Bush Empire.

Opening - as the album does - with “Cold Little Heart”, tonight’s performance instantly reflects the weight given to the recordings by Danger Mouse’s production and Inflo’s deft hands. We have a full band set-up to thank for that – a guitarist, bassist, keyboardist, percussionist, drummer, three backing vocalists and the man himself occupy the stage.

Though the opener begs, nay claws at the walls for some live strings, the ten-minute song still stuns. The warmth of the instruments (which go unaccompanied by lyrics for the first five minutes) the fuzzy atmospherics, the lingering Pink Floyd-like guitar slides, the soaring female backing vocals – they all lay the foundations for what is to follow. And when Kiwanuka’s vocals do eventually kick in, they are the best contradiction of all – smooth, but grainy, full of self-loathing but also joyous, ringing with gospel traditions but also modern.

Four songs into the show and we get the sense that he has really arrived on stage. “Falling” has a breezy sway that perfectly cuts through its solid, plodding bass line and perfectly

captures the deep routed melancholy in Kiwanuka. It gives the best example of what Kiwanuka meant when he said: “A lot of this album was grappling with the insecurities that I’d learned. The first album was grappling with faith. Here, I’m not so worried about that – I’ve accepted that it comes and goes, and now I’m left with myself.” It’s personal.

But then it’s all personal tonight. Politics, race, religion are examined through micro and macro lenses - everything is in turmoil. The irony and frustrations of singing “Black Man in A White World” to a mostly white audience in West London are lost on no-one and in fact brings the issues, particularly of racial identity, into a sharper focus.

Not many songs from his debut album make an appearance tonight, a mark that Kiwanuka has moved on and wants us to come with him. Still though, “Tell Me A Tale”, “Always Waiting”, and particularly the Bill Withers-indebted “I’m Getting Ready” get a rapturous reception, even if there not treated with as much delicacy as perhaps they should have been.

“Rule The World” brings with it a deep, rich warmth and provides possibly the most poignant performance of the night. Kiwanuka’s pleading, pained vocals cry “Show me love, show me happiness” as the Prince-channelling guitar solo weaves and wails through understated tropical rhythms while the three backing singers seize their chance to explore every octave.

It’s a breath taking moment that steers the show perfectly into its closing numbers and an encore that opens with a cover of “Sometimes It Snows in April.” Those departing early, to presumably beat the crush, stop in their tracks: the last time these walls heard that song, Prince himself was likely behind the guitar.

Love & Hate’s title track closes the night. Its uplifting sing-a-long primed chorus seems to exercise some demons for Kiwanuka and the crowd - it’s proud and defiant tone somehow reassuring us that everything is going to be okay.

I mean it’s probably not, but at least tonight it’s magnificent.