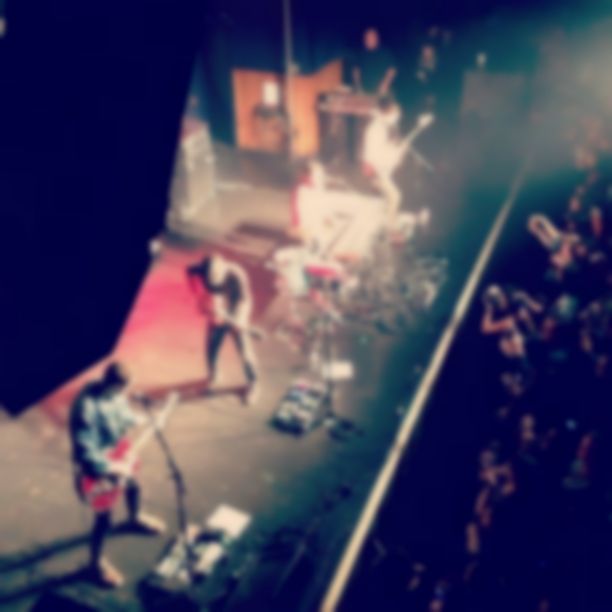 Perfect harmony isn’t always easy to find. However, for many, Valentine’s Day is a time in the calendar assigned for celebrating and embracing its discovery, and whether hand-in-hand with a loved one or looking around a packed London venue for a spark, Local Natives provide an exceptionally harmonious soundtrack to this somewhat peculiar Saints’ day.

The L.A. four-piece’s seemingly ‘not-so-difficult’ second album Hummingbird was released, via Infectious at the end of January, and defiantly proved that not all sophomore albums fail to follow impressive debuts. The direct result on their live show is increased diversity, solidity and most importantly a sizable catalogue of indie-rock fueled hits to match the denim jackets, facial hair and hollow-body guitars on show.

Opening the set with the enchantingly impressive vocals ‘You and I’ immediately demonstrates the quality of their voices and moustache-bearing Taylor Rice’s rasping power and soaring falsetto in particular. Having said that, perhaps the most striking element of their performance is the close four-part harmony that constantly shines through over the top of driving guitars and chunky, relentless drums.

Hummingbird‘s first single, ‘Breakers’ comes flying through next, with its twinkling, reverberating guitar riff and intricate rhythm sending the rammed stalls into waves of excited jostling and arm throwing. The epic power of the song sounds fuller and bolder in the live scenario and there’s almost a hurried impatient feel to it, with peaks and troughs sounding neatly like waves the title alludes to.

‘Wide Eyes’, the wonderful first track from their 2009 debut Gorilla Manor, is met with similar rapture. The songs opening riff remains one of their best; something unnervingly sad and worrying comes through and the track serves as another example of the band’s wonderful use of percussion. Not only do Matt Frazier’s drums cleverly pound their way through this, and indeed the majority of the set, Kelcey Ayer combines his work at the keys by smashing the cymbal and floor tom he is surrounded by. The chorus to ‘Heavy Feet’ that follows is undoubtedly another highlight.

Versatility and a moment of respite is provided by ‘Ceilings’ and ‘Columbia’, both from the new album. Gently weaving guitar, further examples of close harmony and a ballad-like chord progression from the latter track prove Local Natives really capable of it all. “Am I giving enough?” is heart-wrenchingly belted out throughout an inspiring build-up; it’s a proper melancholic love song for the lonely half of the crowd.

Closing the set with three memorable tracks from the first record couldn’t have been more satisfying. ‘Airplanes’ must still surely be the reason so many are here tonight; ‘Who Knows Who Cares’, having been impatiently requested from the floor, sounds emphatic and anthemic, before they wrap up with ‘Sun Hands’ imploring the crowd to continue shouting its joyous refrain.

Perfect harmony found then in the shape of a complete band enchanting a swarming Scala and providing a Valentine’s Day treat with the power to make you fall deeply back in love with indie rock.