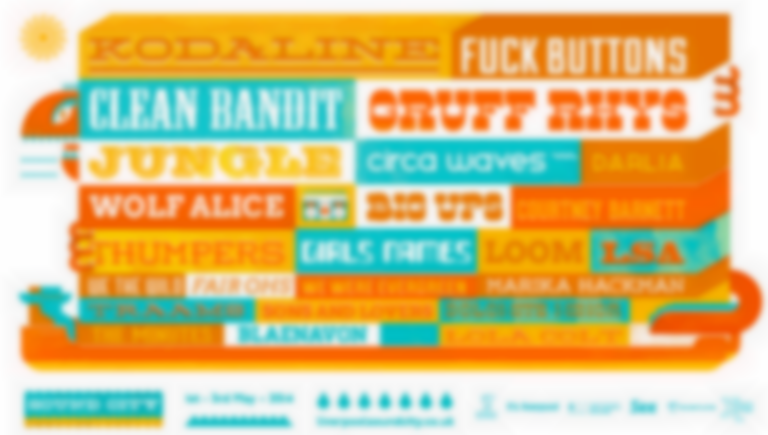 It’s the moment I look up at the ridiculously high ceiling of Liverpool’s Anglican Cathedral, followed by a good long stare at the massive stained glass windows during the pop-house thump of opening act Years & Years that I know Liverpool Sound City 2014 is going to be a good one.

It’s not that the youthful three-piece are terribly exciting; their music is entirely serviceable electro that you’d file alongside Disclosure – it’s more the smart thinking of the festival organisers to use whatever urban spaces they had at their disposal to make this festival a success. While the cathedral is at one end of a sliding scale of architectural beauty, Sound City also created the Duke Street Garage out of, yes, an unused car park and the Factory venue by reclaiming a rectangle of warehouse floor space to host some of the high points of the weekend.

While Years & Years didn’t quite set the cathedral alight, Australian/Swedish sisters Say Lou Lou took us slightly closer to heaven with their sweet set. Dressed like glossy 70s catalogue models, sisters Elektra and Miranda Kilbey drew from that period with some Fleetwood Mac-esque hooks and cherry-picked from the best synth pop from the next decade, the highlight being the catchy-as-heck delight of “Everything We Touch”.

Elsewhere on the Thursday night a packed East Village Arts Club loft were treated to a blistering set from Darlia. Their grunge pop might not be re-inventing the wheel, but if you’re missing the sound of Nevermind-era Nirvana they’re the band for you. Staying with boys and guitars there was also the sunny and melodic charms of Flyte to enjoy, and in contrast the intense glam-plus-high anxiety of Finnish rockers The Scenes who didn’t let a half-full venue hold them back from throwing everything into their brief set. Sweet relief was provided by the soul and beauty of Rosie Lowe and her all-female band who played songs from the Right Thing EP and a gorgeous cover of Nitin Sawhney’s “Sunset” that matched the tone of the candlelit Leaf café perfectly. That respite proved to be short-lived thanks to late-night headliner Jon Hopkins who took his Immunity record and jackhammered the hell out of the beats, and PINS closed off the night with a blistering and powerful set that confirms their transformation into a rock band that brims with controlled rage.

Friday was definitely the day of the weekend. It kicked off with the hypnotic psych rock of Canada’s Powder Blue and then the only male of the day I managed to catch: Gambles, though, was one of the moments of the festival at Leaf; playing without a microphone he paced the floor of the café with his acoustic guitar in hand, serenading the audience with an intimate and incredibly touching performance. From then on in, the night got insanely brilliant: if Pawws doesn’t become the next big pop act in 2014 through songs like “Give You Love” then there’s little justice in the world. Ditto Chloe Howl who is, like Lucy Taylor, such a natural performer and takes no prisoners with her no-shit attitude during her Factory performance. Confidence isn’t a problem for Lizzo either, who transforms tracks from Lizzobangers into sassy and confrontational rap anthems while also being one of the most likeable and funny people on the planet. There’s a different type of assurance in the performances of the electrifying Woman’s Hour who do their hypnotic pop thing like they’ve been up on stage for years, and the big hair and even bigger voice of Rae Morris shows a singer-songwriter of immense promise.

Saturday seemed almost an anti-climax in comparison but did bring a surprise in the lovely country-soul of Australian Mama Kin – the perfect hangover music in the sunshine at Moon Museum -, a short and intimate (and stirring) afternoon set from talented troubadour Luke Sital-Singh, a surprisingly muscular turn from Scots electronic pop mob Babe and a terrific turn from Oxford’s Glass Animals who managed to craft powerful and sultry R&B beats to their guitar pop without it sounding remotely contrived.

While there’s a lot to be said for a festival that allows writers, artists and industry types to network, hold round table discussion and here keynote addresses and Q&As from Gruff Rhys, Thurston Moore and John Cale, people will always be attending a festival to hear music and the organisers have to be praised for a bill that wisely mixed established acts with a whole host of up-and-comings that deserve to be huge (Pawws and Woman’s Hour are just two that spring to mind and stand out from the weekend) while also running on time and having a bunch of great venues in close proximity to each other. 2014’s success means Sound City can only really get bigger and better next time.