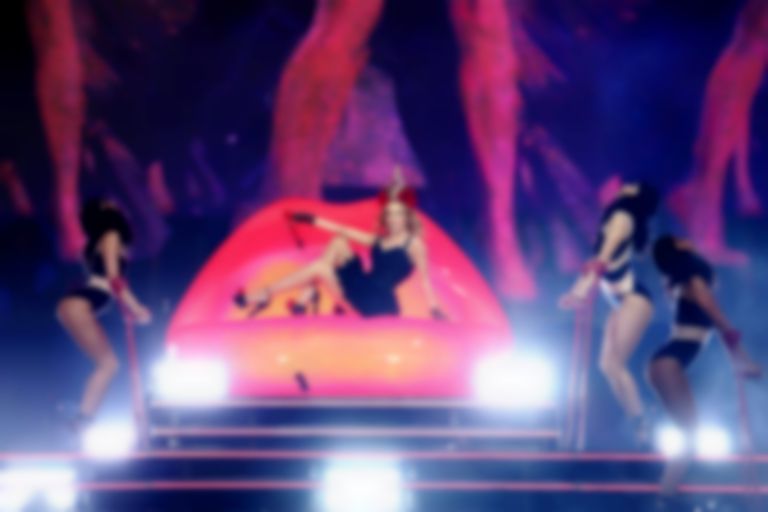 Even if you’re not a member of the gay community, there’s a pretty good chance that you will have heard (or at least noticed) the closing of some of London’s iconic gay venues in recent years.

From Soho haunts like The Ghetto (demolished for Crossrail) or Madame Jojo’s (closed in a spurious licence dispute) to Camden’s Black Cap (licence dispute again) and Shoreditch’s Joiner’s Arms (another long-running dispute), London’s gay community, for better or worse, has significantly fewer places to call home.

Add to that Lovebox’s promoters single-handedly self-destructing the phenomenally successful Sunday ‘gay day’, and you’ve got a real shrinking scene. The march of progress, some might say. But if that’s true, then the march is soundtracked to the beat of Kylie’s hi-NRG pop as Hyde Park’s annual series of gigs comes our in support of a withering gay scene with Sunday’s Official pre-Gay Pride party, headlined by Minogue and another gay icon, Grace Jones.

On first glance, it might have been any central London festival: fat birds from Essex, corporate wankers in the VIP area, disco casualties sleeping in the sun by 4pm, but the fluttering rainbow flags and male strippers, as well as a gradually growing throng of gays streaming in from across the country, and it’s clear that this is the kind of festival that is happy to be a friend of Dorothy.

Glance across the line-up and the bands fall into the same category: poppy loveliness from Years & Years, electro goodness from Bright Light Bright Light and even Mika (“Christ is he still going” is the most overheard quote from the audience). Still, everyone looks happy, and the atmosphere is just right for a Sunday party: not too much sun, no rain, family-friendly with an edge of hedonism. The largely mixed crowd are well and truly ready for a disco of the best variety by the time this writer appears on-site during Mika’s screeching set.

A quick mosey around the site and everything is as expected from a Barclaycard-sponsored event, including £5.50 pints, but it's the main acts who have the potential to deliver something unexpected. 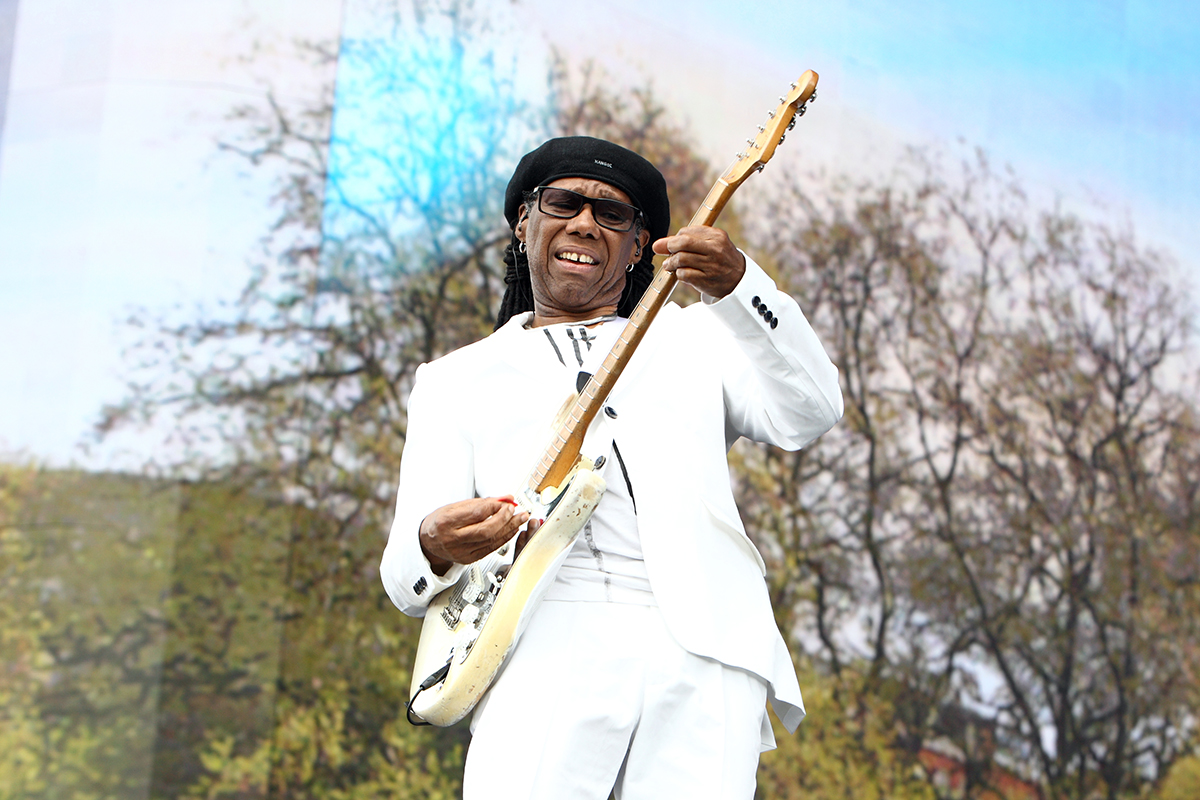 I’ve had the pleasure of seeing (and indeed interviewing) Chic featuring Nile Rodgers several times before, and you don’t need me to tell you that the man is a legend. Yes, there’s the hits and the legacy, and the Daft Punk record and…you know the rest. The man knows how to deliver a festival set, and his ever-in excellent vocal form singers are pretty special too (even their weaves were glossy), rattling through his extensive back catalogue, which crucially for this crowd includes Diana Ross’ "I’m Coming Out". Spectacular – even his new material isn't too shabby – fresh track "I’ll Be There" doesn't dampen anyone’s festival spirit and even the appearance of Sam Smith and The Edge (yes that one) on-stage to the closing rendition of "Good Times" can't kill Chic’s vibes. To be perfectly honest, I’m not sure there’s anything that could.

Grace Jones is always one for an unpredictable stage show – though this normally comes in the form of her off-stage commentary and outrageous costumes. Tonight she doesn't disappoint on that front, appearing in Lion King-esque body paint, tits flying in the central London breeze (the woman is 67, but damn she looks better than most people – men and women - half her age), and brandishing an exceptional array of Philip Treacy headgear. Again, she rattles through the hits with her traditional voracious gusto: at one point in "Pull Up to the Bumper" riding through the audience on her bouncers shoulders, before closing her set as she always does – by hula-hooping for the entirety of "Slave to the Rhythm". At 67! I couldn’t do that now. When I previously saw her at On Blackheath last year, she seemed a little tired, but this show is re-energised, both in costumes and her performance – she is a woman in the prime of her life, and an absolute must-see. 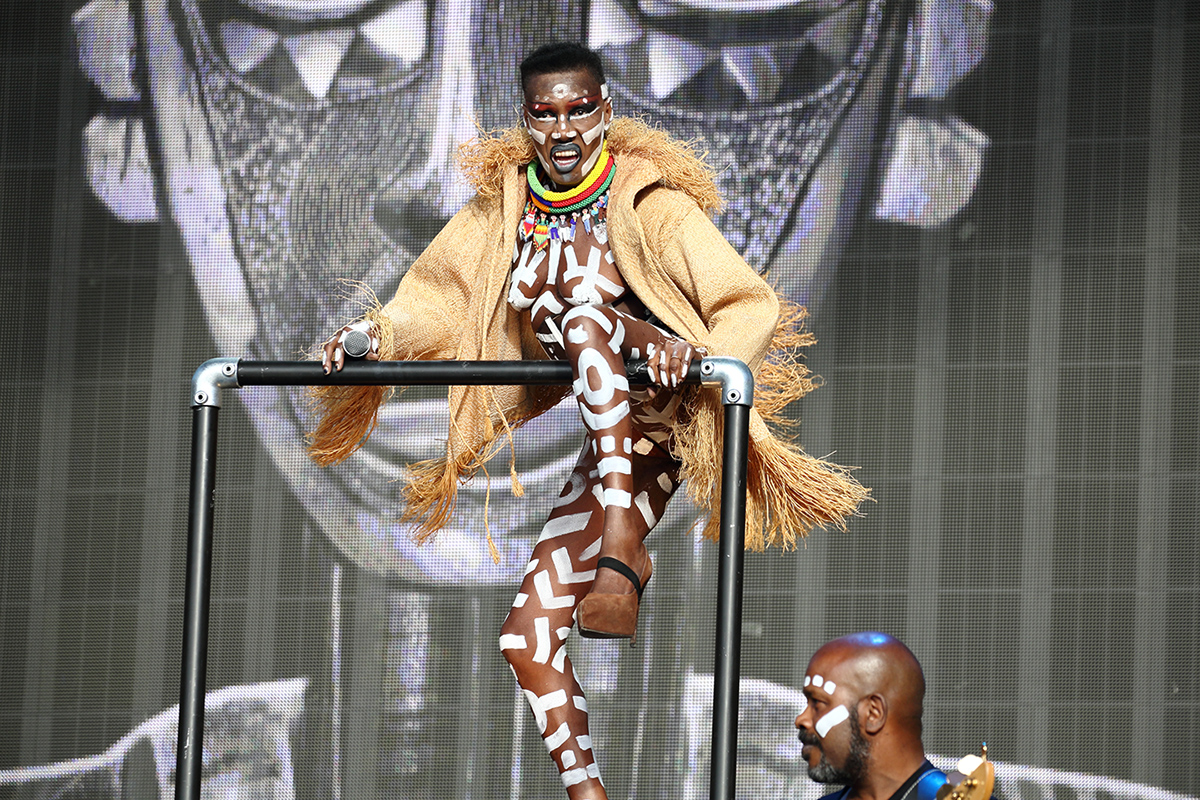 Then, Kylie. Now I’m somewhat ashamed to admit that, at 31, I’d never seen Ms Minogue perform before, despite my (sometimes over-the-top) love of her oeuvre. I’ve heard the stories, watched the YouTubes, seen the pictures, but the full-on hardcore discofest that is a live Kylie gig had always eluded me. To be honest, she is the main draw for me, and she – perhaps predictably – does not fail to disappoint.

The thing about Kylie is that she knows who she is: she’s not some ageing popstar trying desperately to be cool by bussing in some young’uns to her new video and slapping on a load of a new trendy fashion brand. Naming no names.

Kylie is camp pop music at its best, and she knows exactly that. The people’s pop princess has been taken in by the British, and as she whirls her way across the stage with bare-chested dancers, ridiculous headgear (I swear she's in a crown at one point) and pretty dresses to the best of her back catalogue, the crowd are loving it as much as she is. It's one of those great moments in music where the crowd feed off the energy of the artist who feeds off the crowd…and the whole thing is, well, not a very civilised Sunday evening, and a far cry from my usual cup of cocoa and night in with the Antiques Roadshow.

Two highlights (aside from the obvious hits – let’s just say "Spinning Around" may have resulted in this writer spinning a little too much): an enormous conga around the park as she plays "The Locomotion", and an impromptu crowd singalong of the Neighbours theme tune (yes, really) when Kylie mentions the noise curfew and not disturbing the neighbours in Tim-Tim-nice-but-dim enclave Mayfair.

As Kylie joins in the singalong before breaking into much-underrated final banger "Into the Blue", we all look to the sky, sing our hearts out, forgot about ours (and the gay community’s troubles) and wish deeply that it wasn’t Monday tomorrow.