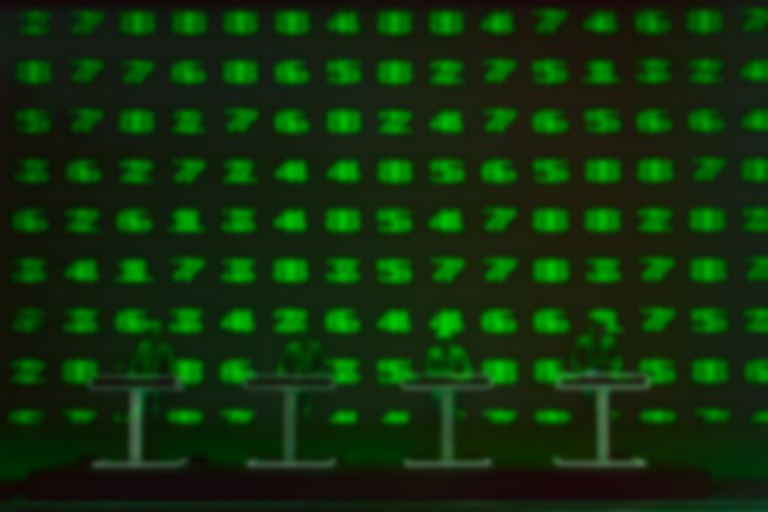 I’d always had some kind of knowledge of Kraftwerk, long before I studied them in GCSE music. Often described as "ground-breaking", Kraftwerk are iconic, and tonight's show at The Royal Albert Hall only reinforces their reputation. They are otherworldly, their approach fully realised through their appearance and sonic landscape. It’s easy to satirise their austere approach – see their leaked rider - but in the arena tonight there’s a genuine air of excitement and expectation. Some had seen them before, some are exposing their children to techno for the first time, and some have found a love for Kraftwerk through listening to their long-established back catalogue. I fell into the last category; I half-knew what to expect, but wanted to experience their full power in all of its pixelated glory. Grabbing my pair of 3D glasses - and awkwardly placing them over my own (2D) pair - I sat down and waited.

Kraftwerk walk unassumingly on to the stage and take place behind four neon-lit lecterns. In comparison to their grand surrounds, the band seem understated, dressed in their skin-tight black suits, but with their lit lecterns at the forefront, we’re reminded that we’re here not just for the man but for the machine. "Numbers" opens proceedings and, as with most of their set, the visuals mirror the lyrics; numbers illuminated the screen, setting the standard for the sonic spectacle ahead. Instantaneously the audience were consumed by Kraftwerk’s synthetic, futuristic aesthetic.

Most songs from this set are lyrically simple; however, accompanied by the visuals, they are thematically bold. Songs such as "Computer World", with its ominous backing and lyrics about controlling institutions, may seem kitschy initially, but their vitality is hammered home here. "Computer Love", through its arrangement and imagery, is highly emotive and its depiction of wanting and loneliness is wholly human. Raw footage is used only a handful of times, "The Model"'s visuals quoting the music video verbatim. In fact, sometimes the use of un-animated footage distracts from the 3D experience and momentarily breaks the illusion.

Throughout this set there is a fine balance between "the man" and "the machine"; industrial songs such as "Radioactivity" are adapted to include more recent radioactive disasters to relate to our own experience of human tragedy, while "The Man Machine" menacingly portrays the threat and power of mechanisation.

To me, hip hop and electronica have consistently been on the forefront of modern music for decades now. Kraftwerk cleared a path for these genres and it’s easy to see their ongoing influence. Through sampling in popular music their sonic palette is so familiar, yet the band remain almost anonymous. The grand visuals distract from the four musicians at the front of the stage and, despite the pulsing beat, the band are focused but seemingly indifferent, barely moving throughout the set. Ralf Hütter, the only original member left, is the most animated when singing.

There is a great mystery as to what the band are actually doing behind their lecterns, and it’s something about which the audience are left to speculate during their first encore of "The Robots", in which the band are replaced by animatronic versions of themselves. This perfectly encapsulates their aesthetic. Returning to the stage for their final encore, "Aero-Dynamik" is euphoric and the Royal Albert Hall's lack of dancefloor is keenly felt. "Musique Non Stop" is the perfect finisher and is the only time we are given a glimpse of the goings-on behind the lectern. As the music reaches its natural end, each musician leaves the stage and their section of their processed beats behind. Hütter is the last to leave and is met with with standing ovation.

Over the years, this set has been expertly refined and heightened by increasingly advanced technology. It is reactionary, revolutionary and thought-provoking. Their set has evolved perfectly, and as their first album is soon to reach its 50th anniversary, you’re left to wonder whether the machine will outlive the man.