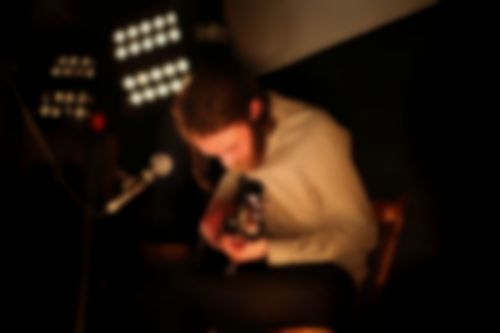 Typically, a music fan will go to a huge number of shows, many of which will be in and around London. The formula is, almost invariably, a dark room with an expensive bar, where you’ll watch a couple of bands, maybe break the bank and have a drink, and go home.

Maybe if it’s great – and you’re a bragger – you’ll tweet about it during sets. Tonight, however, is a slightly, wonderfully different kettle of fish. Held in The Cinema Museum – literally a museum of film memorabilia based near Elephant and Castle – Keaton Henson’s first two shows in months are nestled in an enormous high-ceilinged room on the second story of this beautiful building. Amongst enormous props swathed in a warm orange glow from the little stage there’s a jaw-droppingly cheap bar serving mercifully decent beers, wines and ciders and a home-made food stall at the back of a small sea of chairs and sofas set out for the audience.

Keaton Henson is something of an enigma at the best of times. You put on his album and are greeted by the beautiful murmurings of a man baring his soul through hugely personal lyrics, the softly-crafted tones of guitars and gently plucked strings; a collection of sonic delights for you to make of what you will. Keaton is doubly fascinating in person; he’s quiet, humble and somewhat nervous, bent over a microphone in the middle of a stage that suddenly seems twice the size around his diminutive stature.

His set is opens by a solo cellist performing two Bach suites, building an elegant atmosphere before Keaton walks, slowly but with purpose, to the stage, to huge smiles and applause. His voice is fantastically flawed and believable live, over the warm hum of his electric guitar or shimmering twangs of his 12-string acoustic. Really, he’s an endearing guy all round. “Here’s a song about a female,” he laughs quietly, “for a change.” He proves that his breathy cooing comes from the heart; something complimented delightfully by an appearance from The Staves, whose utterly perfect studio-quality three-piece harmonies back Keaton’s almost whispered vocals with the grandeur of an orchestra.

He closes his set with a new song, one that he claims says “everything I have to say to the world”, and that was written, apparently, as an answer to the typical closing question in interviews (‘do you have anything to say to the world?’). At this stage it’s as if nobody dares to even breathe – let alone whip out a bright phone screen and tweet – lest the atmosphere be disturbed. An audience this enraptured is almost unheard-of, and Henson, with his hugely self-concious demeanour, does an astounding job of keeping it going. While he appears to be a bag of nerves, even in front of an openly adoring audience, it’s rare to see anybody command this much respect from a stage. The whole thing feels very personal, as does everything about and to do with Keaton Henson, but this is why, really, he is such a rare breed. It’s definitely not a night we’ll be forgetting in a hurry, and it’s been so damn special it may just wind up being the show by which we judge most future events.