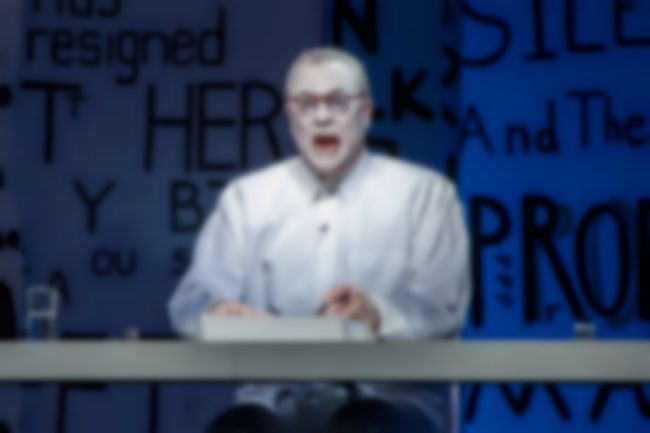 For better or worse, the first piece that comes to forefront of any conversation regarding John Cage is ’4’33’’’. It is not without good reason; as a gesture and a symbol, it succinctly encapsulates how greatly Cage’s ideas on the democracy of noises (and lack thereof) shocked the musical establishment. Yet its legacy can often be reductive (in more senses than one) to the brilliance of Cage, and rather than a maverick, many see him as an emperor proudly showing off his birthday suit.

On glancing at the title of the lecture, on might have assumed that the evening’s proceedings would only reinforce this image but the opening gambit of the reading is an electronic shriek like amplified tinnitus causing many to squirm, hold their ears and think about getting the hell out of here. No small shock for those expecting the sound of silence. Robert Wilson, sitting in the middle of an incredible set strewn with newspapers from nowhere and headlines about nothing, conducted the stoic cacophony and sipped water, while a mysterious besuited man investigated the audience with binoculars. And then, after what could have been anywhere between two and twenty minutes – for it’s difficult to tell when being smothered such noise – we were in old familiar silence, waiting for the talk to begin.

The sense of disorientation yielded by this experience is probably the best possible introduction to Cage’s Lecture On Nothing, recited as part of the Barbican Theatre’s Dancing for Duchamp series. The work is a neat summarisation of the composer’s philosophy of music, as well as an application of his musical structures to a piece of prose. But while that description makes the proceedings sound like one of the most turgidly arduous ways to spend your Monday evening, the reality is a light-hearted enlightenment. As high-minded and pretentious Cage’s ideas may seem when objectively described, it is remarkable to note his gentle wit, even inviting us through the text to go to sleep if we were bored. Robert Wilson, perhaps the world’s most renowned dramatist of the avant-garde, does a marvellous job of capturing the naïve wonderment of the composer.

‘I have nothing to say and I’m saying it.’ The central statement of the lecture would work well as a slogan for Twitter, but the oxymoron can lead to a great understanding of Cage’s philosophies. While seemingly content-free, it reveals the idea of purposelessness as a good – nay, vital aspect of what he calls music’s ‘affirmation of life’. Wilson et al wonderfully displayed this, as we admired the confusing intermittent sounds stumbling out of the loudspeakers, and admired the performer as he intoned (and snoozed) his way through Cage’s text – paying special attention to the blank spaces.