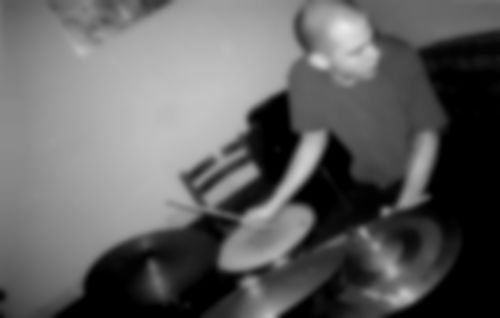 Autumn is most definitely here. It’s dark. It’s cold. It’s wet. These things do not inspire me to get on my bike and cycle across Cambridge to the Corner House, one of the cities less salubrious venues. However, having hijacked a car for the evening, I travel across the city to check out local promoters Crushing Death & Grief’s programmed night of aural hi-jinx.

Glass Cello have taken some obvious cues from the similarly electro-obsessed duo Orbital. There’s shades and florally decorated spectacles, their hands, as they pick a path across keyboards and laptops, are adorned with little fingers of lights. However, instead of Orbital’s polished electronica, we get something a lot rougher and dirtier. They also seem to overuse vocals, and, as they’re not particularly good it detracts from the post-club techno and dance grooves that they’re peddling. As they stray from the vocal babbling, and sort out their technical issues, their sound becomes much more embracing, turning the cold and dark atmosphere into something almost euphoric.

TIME are the duo of Frances Morgan and Mark Dicker. Their sound was an altogether different beast. Picking their way through influences such as Richard Youngs and Six Organs of Admittance, this was, at times, beautiful drone-doom-folk. Starting slowly with piercing drops of violin feedback, the song slowly takes shape around Morgan’s beautifully haunting vocals, the slow moving guitar riffs perfectly complementing. Only when the riffs become the dominating force does my interest wane. However, this was an early issue, and the set developed along the sounds and influences of Ben Chasny. Dicker’s vocals are almost chanting, his delicate and dusty guitar riffs joined by the crackling bass guitar that Morgan picks up as the set murmurs and thrums in equal measures.

The main event this evening was Jailbreak. Another duo, but this time consisting of pedal steel and vocals from Heather Leigh Murray (she of the excellent Volcanic Tongue record shop and distribution) and percussionist Chris Corsano. I’d seen Chris as part of the Flower-Corsano duo at last year’s Supersonic Festival and was completely floored by his performance. This seemed like an excellent opportunity to witness his skills up close and personal. Their 40-minute set was a barrage of improvisation, taking elements from a vast array of influences. The start hinted at a reason behind the name – Heather’s slow moving harmonica bringing to mind classic Westerns as Corsano coerced gentle percussion out of his borrowed kit. This could easily have soundtracked a Sergio Leone stand-off. However, the set didn’t dwell on this for long before the free-jazz and hacksaw pedal steel took to the fore. Heather’s wailing banshee vocals driving, piercing through the noise. Saying that Corsano’s percussion is “other-worldly” does it a disservice. It’s so direct and perfect that it becomes mesmerising and fluid – his hands a blur. Multiple sticks and brushes grace the skins as he pieces together a whirlwind of rhythms and textures. On a night like tonight, with Winter finally rearing its head, this stormy music seemed perfectly apt.