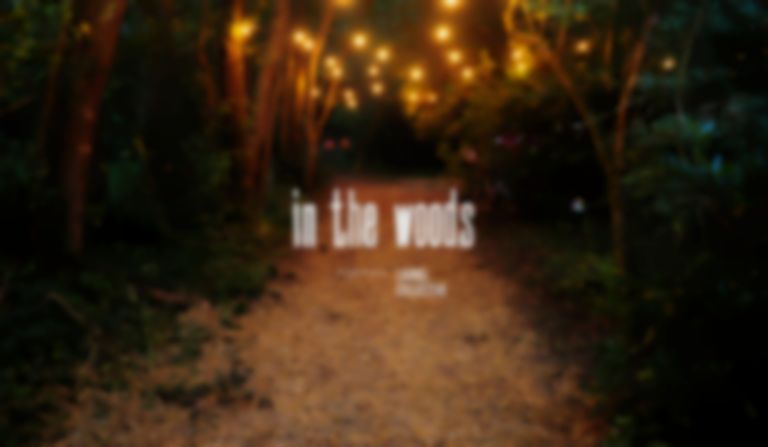 With swathes of boutique festivals popping up in the last few years, it is easy to imagine that an intimate new music love-in, a little over an hour from East London would be a case of more style than substance.

However In The Woods, with its carefully curated line up of indie movers and shakers performing in the beautiful belly of a wooded quarry in Kent, puts equal emphasis on both music and the stunning setting that backdrops the whole affair.

In The Woods also has a twist to how it operates in that you don’t know which artists you are going to see when you buy the hard to come by ticket. For people who go to festivals specifically to see certain acts, the completely hidden line up will cause frustration as it is literally impossible to know who is playing until you arrive on site and get a programme, but for those who embrace spontaneity and like to stumble upon new musical obsessions, it is a dream come true.

The line up is always in good hands though, having been lovingly curated by members of indie outfit the Laurel Collective alongside friends Tim Adam-Smith and Will Brown. Founded by the band back in 2005, the In The Woods site is actually the home of drummer Charlie Andrew’s parents, and what started as a grassroots gathering for friends and family has grown into a fully-fledged festival.

With an intentionally small capacity of around 1000, In The Woods has a reputation for intimate performances with acts on the brink of bigger stages. Now in its ninth year, it counts alt-J, Lianne La Havas, Nick Mulvey and Lucy Rose all among its breakthrough alumni, and specialises in attention to detail. The woods for example are draped in art, wind chimes, fairy lights and the paths lined with newly planted flowers, which remain pristine through the civilised party.

In true new music fashion, XFM’s lovely John Kennedy compares the two day event and can be seen running Benny Hill style between the two adjacent stages at the bottom of the honed amphitheater. With his experience at the helm of the station’s Xposure show he is perfectly suited for the task, being full of stories and quips about the acts and what they are up to.

This year there was no disappointment in producing the musical goods. Acoustic queen Laura Marling performed a special set on the Friday night for all the early birds, which set the bar high for the rest of the weekend. In terms of bigger artists wordsmith and hip hop bard Kate Tempest captivated audiences in a different way on the Saturday night with transcendent material from her new album Everybody Down and was followed by an energetic set from Glass Animals.

New music was plentiful throughout Saturday with new indie acts Shopping and Juffage providing two quirky sets back to back. Manchurians Temple Songs proved themselves capable of nailing neo-psychedelia with infectious new single “I Can’t Look After You”. On the smaller Laurel Lounge, the dreamy Gengahr provided the perfect soundtrack to the sunny day with their dreamy and ultra-chilled soundscapes.

Two highlights of the festival were without doubt a spectacular performance from one man band, Jack Garratt, who with a belter of a voice, a keyboard, drum machine and a guitar going simultaneously at times proved conclusively you don’t need a band to perform a stellar show. With the same spine tingling effect of James Blake, he definitely a one to watch.

The other standout was local Kent garage punk band Slaves, with their humorous and straight talking crash of noise. Numbers such as “Debbie Where’s My Car?” were particularly enjoyable, as everyday scenarios are turned into something shouty, yet remarkably fresh.

If the new musical offerings weren’t enough, plenty of other activities were thrown in for good measure. A spoken word and storytelling stage provided some respite if you needed it with artists like Vanessa Woolfe spinning yarns, in addition to life drawing workshops, floral headband making, an impressive hog roast and a 20ft bonfire at midnight. With every need, age and most musical tastes catered for –albeit unknown in advance- if you ever go to In The Woods, you’ll be sure of many a pleasant surprise.