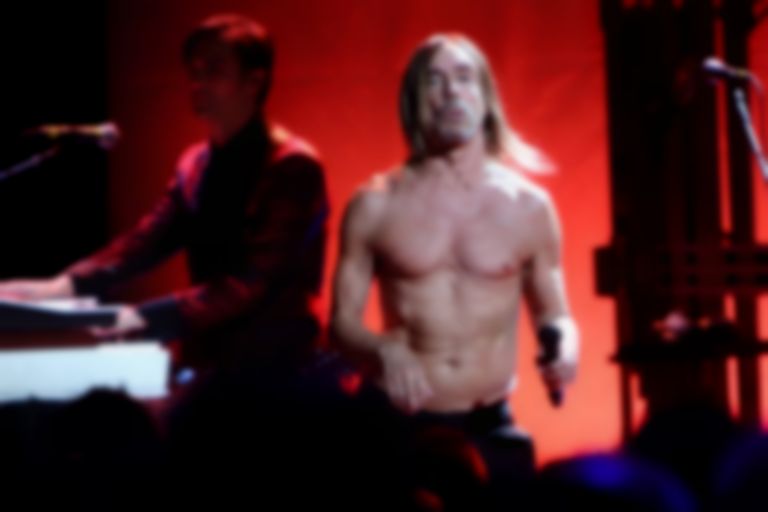 After the batshit bonkers October Colombia has had so far, the sight of a madcap, shirtless, turning-septuagenarian man prancing around a Bogotá stage making a helluva racket seems positively tranquil in comparison.

For those that don’t know, the country you’ve watched through the gringo gaze on Netflix’s Narcos but can’t spell cos phonetics are hard last week decided in a public vote not to end the longest war in the Americas. The immediate takeaway is to stop having referendums, but the enduring mood is one of division, anger, confusion and fair whack of downright despair about what in the name of Magical Realism happens next. But fear not ye weary Andeans, King Iggy - as the pre-gig publicity for the show tonight (6 October) at Bogota’s Royal Center coronated him - is on hand to soothe hardened spirits.

The Michichigan-born Señor Pop opened with a triumvirate of his best-known barnstormers, rattling through “I Wanna Be Your Dog”, “The Passenger”, and “Lust For Life” at the get-go. It certainly did enough to get people pogoing away their political strife. The crowd tonight - approximately 90% beardy dudes and 10% girlfriends - had a right boogie as their anointed liege limped, crowdsurfed and uncle-danced through the hits that catalyzed the proto-punk movement back in the late 60s.

Pop - whose real name James Newell Osterberg Jr is a contender for most conspicuous name ever alongside Ken Bone, the chap who asked US presidential hopefuls about coal in Sunday’s debate, and Tokyo Sexwale, a probably-corrupt FIFA suit who wanted to succeed Blatter - spoke little, opting to let his snarling, waspy presence do the talking. Not that he needed to worry. The Bogotano watching next to me kept shouting “Iggy fucking Pop!” throughout, in place of singing the words, which I suppose serves of a barometer of how venerated the man is in the city’s hipster circles.

Notable by his absence in the backing band was Josh Homme, the Queens of the Stone Age svengali who must make a nice little packet being in bands but not playing in them. At least Bez showed up to Happy Mondays gigs. The rest of them - and I’m not enough of an aficionado to know their names - sound tight as anything though. You really can’t go wrong with the noise a Fender Tele makes when plugged into an AC30.

The setlist is light on tracks from this year’s Post Pop Depression, which is probably for the best as it’s not like anyone has heard it. Just “Gardenia” gets an outing and it’s good enough, without pushing too many envelops. Given Iggy’s been doing this for umpteen years, he’s never gonna innovate like back in the heady Bowie Berlin days of the late 70s.

Elsewhere, the back catalogue got a thorough rundown. “1969” got a few happy whoops. “Raw Power” did sounded like its name suggests it should. “Nightclubbing” allowed the pace to let up a jot midway through, whilst proving that Trainspotting is as much a cult go-to here as back home.

After a nutbar-raucous (and yes, nutbars can be raucous) rendition of “No Fun”, Iggy and as band of noiseniks shuffled off the stage, only for the man to return seconds later, sweaty and bedraggled as you like, to take some bows. “Vemos!” he spits - a Colombianism for goodbye.

Pop - the man, not the genre or the third munchkin on cereal boxes - used to live in Bogotá, when Colombia’s seemingly-interminable internal conflict raged apace. Back in the days when that mustachioed, hippo-owning druglord you all think is suave let blood rain, Iggy was prowling around the city’s colonial city. Since then, he’s entered urban legend - but he doesn’t seem to give a hoot. Tonight, he reminds of a gag in The Thick of It referring to the tireless, raging spin doctor, “who can’t stop moving or he’ll die, like a shark or Bob Dylan.” Iggy, igging away interminably on stages all over the place, doesn’t sit in the latter’s company, but he’s edging it over sharks.

So, Colombia - the bonkers country that continues to confound - was given relative normalcy for two hours when one of garage rock’s foremost plonkers stopped by for a greatest hits set that did everything it said on the tin. Vemos, Mr Osterbeg Jr.