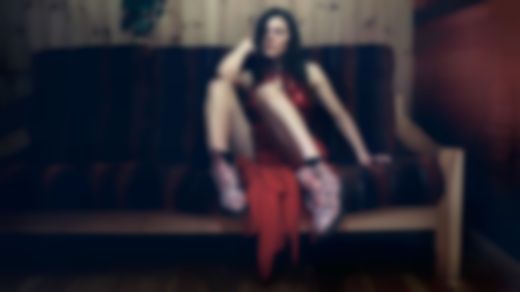 After a short sharp shock of a set from Say Lou Lou (prior to their Best Fit headliner at Madame JoJo’s a couple of hours later), the launch soirée for Swedish festival, Way Out West, in London sees quirkess, Lune, take to the stage.

Proving that this one-off evening celebrating Gothenburg’s finest summer outing is not all about the Scandinavian canapés and cider, Linnéa Martinsson (for it is she!) is here to remind us why Sweden has such an unquestionably impressive music heritage.

Her demure demeanour is mixed with a knowing edge and a half-smile that betrays confidence cut with vulnerability. She is accompanied on stage by a laptop loaded with pre-recorded music and a hippie-Shaman dude, Mårten Spångberg, who – apart from a bit of acoustic guitar playing on a couple of the quieter tracks – limits his contribution to ambient lighting. This he creates by shining a flashlight on various objects, such as gift-bags and silver mixing bowls. It’s bizarre, it’s distracting, but hey – it’s part of the Lune stage set-up and, you know what? Ultimately, it doesn’t take away from the fact that Martinsson is a captivating performer with a very strong set of songs and you soon learn to ignore the somewhat unnecessary stuff happening around her and focus, instead, on the music.

Lune’s voice, at points, is almost startlingly similar to Bjork’s and her songs are often characterised by a pulsating electronic beat layered with melodious instrumentation. From set-opener, ‘Falling’, through ‘Boys’n’Roses’ to recent single, ‘Girls With Bangs’, she grows in confidence and the crowd becomes more and more smitten.

‘Lori Grimes’ finds Lune and Spångberg delivering a beautiful guitar ballad, where enough breathing space is given to the vocals, and a languid fade then connects smoothly with the equally-notable, ‘Rain’, before leading to the tempo-rejuvenating, ‘That Day’.

Even if you are not sure what to make of this act at the outset, by the time closing number, ‘Close Dance’, is halfway through its stage time, you can’t help but feel taken in. This performance certainly manages to whet our appetites for Way Out West, where we hope to see and hear more of Martinsson.