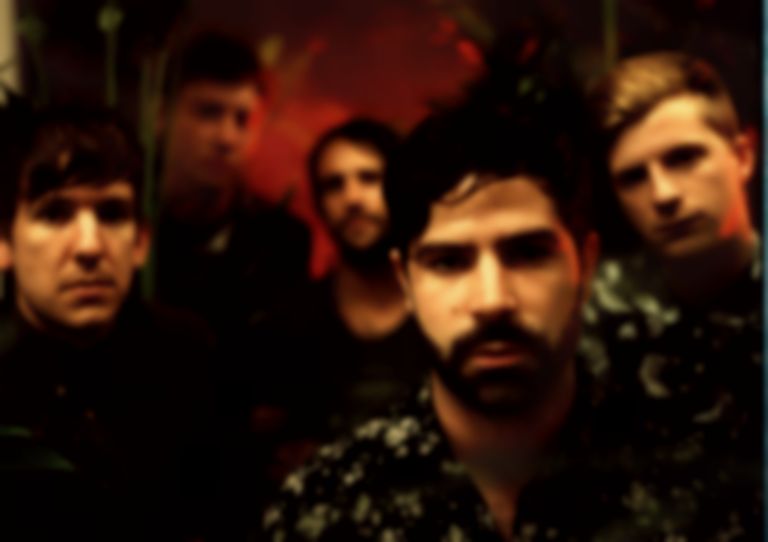 Foals didn’t have a bad 2013, did they? Holy Fire accelerated their previously steady rise to prominence, making them, by nearly all accounts, the most electrifying guitar band in Britain. Everything was bigger; the sound of the record, the venues they played, the size of their name on festival posters. It’s only eleven months since they last played in town, and we’re less than a mile down the road, but Foals seem to have come an awfully long way since; a first appearance at the ornate, if shabby, Apollo Theatre – pretty much the biggest room you can play before you get to the Arena – is long overdue.

For my money, though, Holy Fire was actually distinctly average. It was basically a continuation of the equally tepid Total Life Forever, with a bunch more straightforward rock templates replacing the brilliant eccentricity of their masterpiece of a debut; Antidotes was a record that showed outrageously scant regard for convention, with its tight guitar work and time signatures that just barely stayed inside of the lines. Back then, the Foals we saw onstage were less a rock band and more a force of nature; there was a little bit of genuine danger about them, with a sense of imminent chaos permeating their performances.

Now, though, they’ve dialed down the havoc in favour of a touch more professionalism; Yannis Philippakis doesn’t howl his way through the set any more, probably on his doctor’s advice, and there isn’t that pack mentality to the five of them that used to be so prevalent; they’d crowd the middle of the stage, playing almost into each other, feeding off of this mutually generated intensity. As if to underline that new sense of isolation between them, the band arrive one-by-one tonight, gradually working their way into one of the evening’s highlights; a brooding rendition of Holy Fire opener “Prelude” that simmers with real aggression.

Most of the filler from the last two albums is excised tonight, with the focus on the highlights instead; “Blue Blood” carries the sheer prettiness of its opening stages into its irresistibly danceable second half, and there’s a hint of symbiosis to the way in which the primitive funk of “Total Life Forever” segues neatly into “My Number”’s glorious pop sheen. The older material, though, lacks bite; the interlocking guitar lines on “Balloons”, which tick like time bombs on the recorded version, are oddly distorted, and a rare outing for debut single “Hummer” to open the encore proves a sloppy affair; the taut, sharp quality necessary for Antidotes-era tracks to really work live is conspicuous by its absence.

There’s advantages, of course, to the fact that Foals are now a bona fide Big Rock Band; the laser-heavy light show is a veritable assault on the corneas, and Holy Fire deep cut “Providence” is one of a few tracks mid-set to be closed out by incendiary – if rehearsed – extended jams. Such status isn’t without drawbacks, too, though; you’d be forgiven for thinking that a sizeable chunk of tonight’s crowd got lost on the way to an amateur drinkers’ convention, until you realise that’s precisely where they would’ve met Foals in the first place – at a mainstream music festival. Ninety percent of such gatherings, of course, now exclusively cater for people who consider music a triviality peripheral to Instagram, ‘fruit cider’ and obnoxious conversations as loud as they are banal; Philippakis announces that he wants tonight to be “fucking savage”, but it feels like only the hardy folk at the front grant him their undivided attention.

I should point out that there’s one thing that’s survived the transition the band have made these past few years, and it’s hugely to their credit; their ability to cultivate real atmosphere when they air some of the quieter tracks. “Spanish Sahara” is the smartphones-aloft moment, sure, but whilst the haunting “Red Socks Pugie” remains the best thing they’ve ever written, it’s given a close run for its money by the positively Lynchian “Late Night” – a slow-burning confessional on which Philippakis sounds broken and the band respond accordingly, providing cautious, creeping backing that eventually explodes at the climax.

Foals will be back in town in June to headline the Sunday night of Parklife Festival; their opposite number on the Saturday is Snoop Dogg. There’s a wonderful juxtaposition there, I think, between a laughable has-been who’s long since been a caricature of himself, and a band who are on the precise opposite trajectory. Foals aren’t the band who made Antidotes any more, and I miss that band, but they’re ultimately bigger than me and, if they continue at current pace, will be bigger than any of their contemporaries before long.

Once they put Holy Fire to bed this summer, they’ve a fourth record to make, and there’s no question it’ll come to define them. It’s all there for them, if they want it; the really big headline slots, the cavernous venues, the big leagues where sales certifications are concerned. Have they sacrificed a little of what made their early work so engaging to get there? Yes. Are they still infinitely more exciting than the rest of this country’s mainstream rock bands? Yes again.