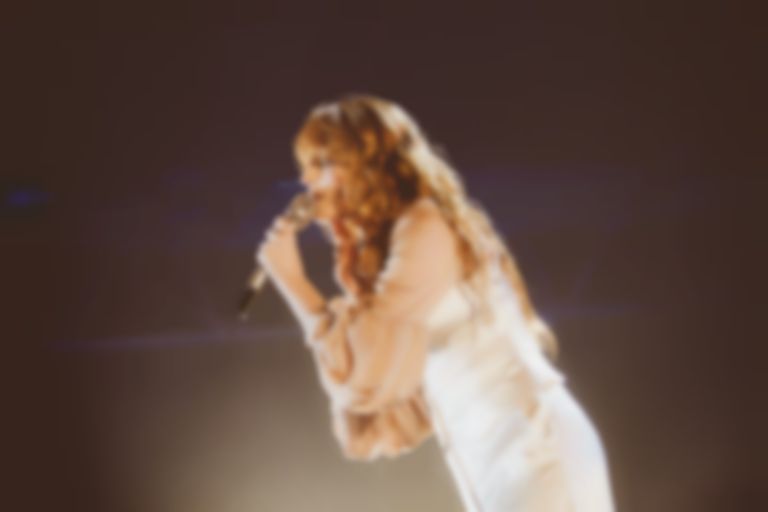 After stepping in and triumphing as a last minute Glastonbury headliner and topping the album charts on both sides of the Atlantic with her most stripped down record so far, Florence and the Machine could have played the O2 or Wembley Stadium. Yet instead she’s opted for the relatively intimate Ally Pally, which is the first in a series of tonight’s (21st September) masterstrokes.

Walking up the hill to venue, the view of London’s skyline is breathtaking, calling to mind the celestial musings of How Big, How Blue, How Beautiful's title-track. Arriving at the 19th Century building on a crisp, autumnal evening it feels like the perfect location for Florence. And it is - while tonight she combines dizzyingly wonderful musical and performance theatrics, the songs pull off the amazing trick of sounding like they're being whispered into your ear.

Florence enters the stage in her now customary white suit with The Machine dressed in black. Augmented by five singers (three of whom double as the brass section) there’s a whopping twelve of them on stage. But despite such numbers, the focus is on the singer and her supreme star power, live she’s a Whirling Dervish throughout - if she’s not running across the stage or into the audience, she’s jumping up and down on the spot.

Flanked by two video screens, they launch into the beautifully controlled yet mesmerizing psychedelic gospel of “What The Water Gave Me”. Without drawing a second’s breath they then fly into “Ship To Wreck” and the delightful abandon of the delivery contrasts marvelously with the sadness of the words, which are about losing yourself in booze to stave off the blues.

The aesthetic behind How Big... that less is more, is applied to reworking’s of some of her older songs. “Shake It Out” starts a cappella, with the audience duly clapping and singing along to its blissful soul music and “You’ve Got The Love” features only voice and piano until midway through the second verse. Perhaps the best refinement tonight is “Cosmic Love” which starts with plucked harp before being joined by a gently strummed acoustic guitar and piano and ends with Florence hitting impossibly high notes.

But this isn’t an MTV Unplugged performance by any means. “Delilah” is just huge, a soul review relocated to the 21st century and “How Big, How Blue, How Beautiful” with its thumping brass sounds enormous. It’s prefaced with an explanation of how, having carried the song around the world, it now belongs to London, which could be cloying in another artists hands, but Florence’s infectious enthusiasm and love for what she does tells a different, more sincere story. She then loses herself in the songs narrative, but despite its inherent tragedy it doesn’t descend into self-pity, rather it’s a celebration of times past. She of course ends it with a frenzied burst of modern dance.

The performance element isn’t just limited to Florence however, the audience is Iinvited to perform a variety of tasks too, all of them tactile, which includes being asked to embrace their neighbor at one point. But the most visually interesting request comes when she asks the audience to "get as high as you can, if you’re with someone put them on your shoulders and raise them up" and with that “Rabbit Heart” becomes a delirious celebration in which seemingly half the crowd are in the air and it feels like we’re at the scene of her Glastonbury triumph rather than an opulent hall in North London.

The encore starts with “What Kind Of Man” with Florence stood in a crucifix position and with the stage bathed in blood red light; the song’s darkness is brought to life visually. She falls to the floor to deliver the anger of the line ‘to let me dangle at a cruel angle’ before jumping into the front of the crowd, she then returns to lie prostrate on the stage.

Yet she dusts herself down and signs off with Lungs “Drumming Song”, the blood red drenched stage gives way to a more hopeful white light and its theme of longing shows the continuation of a love that’s never quite run smoothly in her songs. She takes her ovation and pirouettes offstage.

Tonight Florence was a shamanic leader of an entranced tribe. The sheer devotion, dedication and love she brings to her songs make for a supremely engrossing evening. Whilst delivers a spectacle, there's much nore to be enthralled by her live. The refined brevity of her new material sees her wall of sound retained but given a nuance of subtly and new lease of life that’s as wonderful to watch as it is listen to. Heartbreak has never sounded more joyful, which is the ultimate of tonight’s masterstrokes.