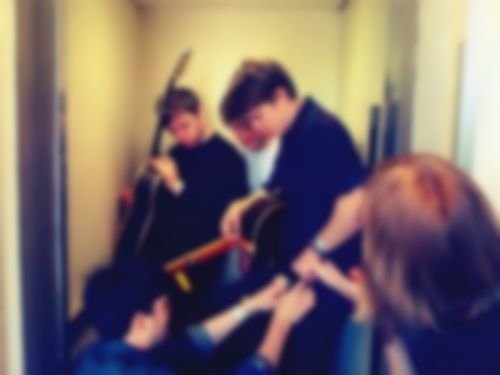 It’s been a while since I last graced the hyper-modern surroundings of Cambridge’s ARU Student Bar for a gig… My companion for the evening seemed to think the last time we were here was for White Rose Movement… which WAS a long time ago. So, when the opportunity came to check out a band who’ve probably split public opinion more than most this year, I jumped at the chance.

After reacting in shock at how cheap the refreshments were, we arrived to catch Visions of Trees already into their set. Having enjoyed their recorded output, I was left a little cold by their live act. Their sound resembled the post-club disco of High Places but without the variation and catchy hooks. Their lack of interaction with the crowd was also noticeable – each song merged into the other creating a wafting dirge of processed beats which just didn’t do their pop exploration any justice at all.

As TLOBF had got into a bit bother with our review of Everything Everything’s debut album, it was with no small amount of apprehension that I prepared myself for their live set. The first thing that struck me was that, away from the posturing, they make good pop music. From the cutesy ‘My KZ Ur BF’ with its obtuse angles and try-and-say-it-after-a-few-pints chorus, you find yourself spirited away into a carefree world of crystal clear riffs and jangling rhythms.

Everything Everything have crafted their sound by doing a magpie job of picking the successful elements of past bands and twisting them to their own ends. Take the Futureheads-aping harmonies of set closer ‘Suffragette Suffragette’ warped with their own, killer, chorus. Then there’s the crackling guitar riffs that meld the post-punk preciseness of Bloc Party with the dance-floor filling nature of Franz Ferdinand. With their live set, the delicateness of the record is replaced by a tendency to resort to clichéd power riffs and extended guitar work, but it works. There are pop gems hidden amongst the knowing glances.

I think my main problem with them 0 and that came across this evening – is their attitude. They’re not as good as they think they are, and this swagger and posturing they’ve developed isn’t quite justified. The crowd were also rather strange – as their set finished, there were a couple of cries for an encore, but it quickly went silent as the guitar techs retuned the guitars, and the band reappeared. The silence wasn’t reverential, it was, perhaps, a little too resigned to the encore. But despite this, my over-riding feeling was that I wanted to got back and listen to the album. Which, ultimately, is the idea of a band playing live – a neat way of getting you to into their sound.