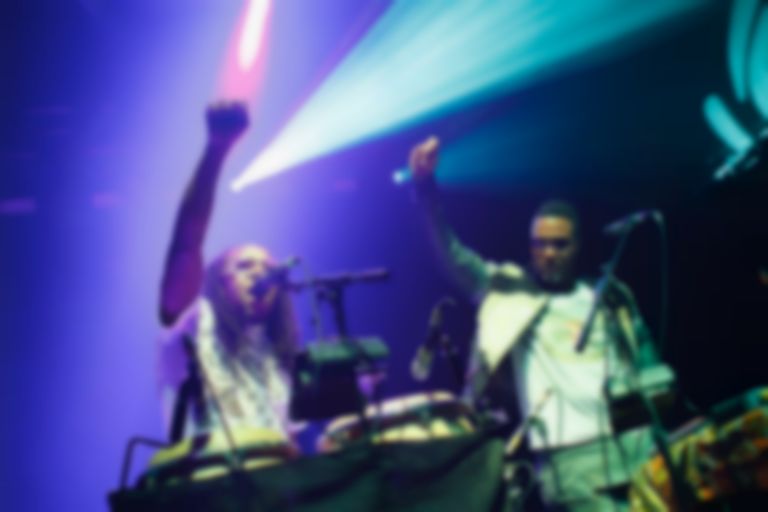 I first started listening to Shabazz Palaces two years ago, having come across the Seattle rap group’s work via Ishmael Butler’s original hip-hop project, Digable Planets. As a big fan of this earlier material, I was admittedly pretty late to the party in finding out about the Sub Pop signees, and there was plenty to get caught up on. Now, the experimental hip-hop duo have four critically acclaimed albums under their belts, the latest two of which were released this year as a pair of conceptual pieces following Quazarz, a musical ambassador from outer space as he navigates Amurderca. These pieces are probably the group’s most ambitious to date, expertly weaving extra-terrestrial narratives through the lens of contemporary America, underpinned by lo-fi, heavily processed, and often somewhat jarring instrumentals. In the build-up to their Oval Space performance, I was eager to see how this balance would play out live, and whether the duo could retain the surprising approachability of their records, or whether it would miss the mark in this respect.

With this in mind, I arrived at the venue early in order to secure a good spot of the performance. Luckily on that hand, the Oval Space isn’t really the typical setting you might have in mind for an hip-hop show; despite feeling pretty packed out, there was no problem finding a clear view to watch the stage. The start of the performance was announced with the Shabazz Palaces’ red logo flaring up on screen (which would feature live visuals throughout), accompanied by Funkadelic’s “Eulogy & Light” from their 1971 album Free Your Mind And Your Ass Will Follow, with George Clinton’s booming monologue serving as a warped, futuristic hype man to build tension for the ensuing performance.

Setting the scene in great style and in true spirit to the group, Butler and Maraire walked onto the stage as “Forerunner Foray” (my first introduction to Shabazz Palaces and still a personal favourite) came blasting onto the speakers. Initial technical difficulties with Butler’s microphone did little to dampen spirits, as Maraire got to work juggling between vocal loops, launching bass and melodic parts and laying down grooves between a stripped-back kit and his percussion set-up. With his microphone back on, Butler’s delayed first verse came with a renewed energy, and brought with it a round of exhilarated applause from the audience. I was immediately struck by just how great Butler’s voice sounded live, and through the rest of the set tried to put my finger on why I was so taken back by it. From too many experiences of seeing otherwise great MCs shouting their way through a set, drowned out by over-excitable hype men and instrumentals, it was so refreshing to hear a veteran rapper such as Butler sounding just as good, if not better than, the recordings I’d become so used to.

Following this intro the set moved swiftly on, jumping between albums in a continuous hazy mix of wonky beats, rumbling sub bass and quivering synths, with such tracks as “Youlogy”, “They Come in Gold” and “Eels Dream” providing great early high points for me. “Welcome to the Quazarz” signalled an ominous change in mood, with distorted images of rockets, tanks and the American flag flashing across the screen, as Butler critiqued gun laws in the U.S. Further along and the pace shifted again, with the duo changing gears into a largely instrumental section where Maraire’s skills as the son of a Mbira master became clear. During these sections, projections of the cosmic godfather Sun Ra in full Egyptian headdress could be seen, providing further context to the performance and placing their work within Ra’s conceptual framework.

With the performance running almost non-stop up to this point, “Shine A Light” provided a great break in the set, and perhaps the warmest crowd response of the night. Here, Butler took a rare opportunity to address the crowd, thanking them for coming before gearing up for the next track with “we’re gonna take you back”. I found this a pretty amusing introduction, considering that the single was released only earlier this year. Sure, the track definitely has a throwback feel compared to most in their catalogue (owing to the classic sample basis of Dee Dee Sharp’s “I Really Love You”), but upon reflection, I thought this was actually quite a revealing moment of the night, emphasising the duo’s forward-thinking nature and their refusal to dwell on the past. Equally, it settled any doubts I might have had about the duo being able to find balance in a live setting. Like on their records, Shabazz Palaces always manage to reign in the weirdness when needed and keep an audience engaged, offering perfectly timed moments of respite without compromising on what makes them so great in the first place.