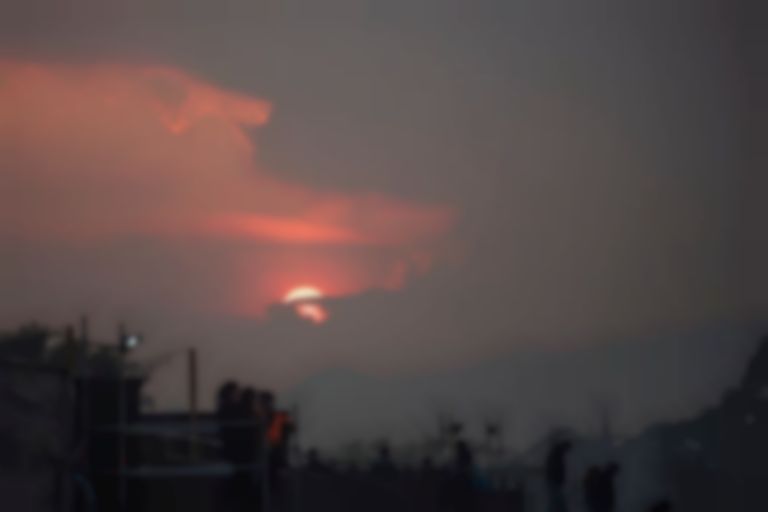 Estéreo Picnic is Colombia’s Glasto, in that everyone wears flower crowns and it gets ruddy muddy. Also, Florence & the Machine and Mumford & Sons headline.

For now, back to the mud. People at home think life out here is all palm trees and perving on curvy types in bikinis. Regrettably, that’s not the case. Bogotá, the capital where I live, sits god-knows-how-high up a mountain, and it rains like a mother. Proper, biblical rain with thunder that rattles bones and sets off car alarms. Therefore, Estéreo Picnic, which calls some underserved park outside the city limits its home, is prone to becoming some godforsaken quagmire.

Are wellies a thing here? Not really. But am I a resourceful and well-prepared chap? Absolutely I am. So, I start this festival round-up with a gentle brag about how I was the only one I saw who survived the mud, footwear intact. Colombian hipsters, you’ve a lot to learn.

Anyway, there was also music at this thing. Let’s talk about that. 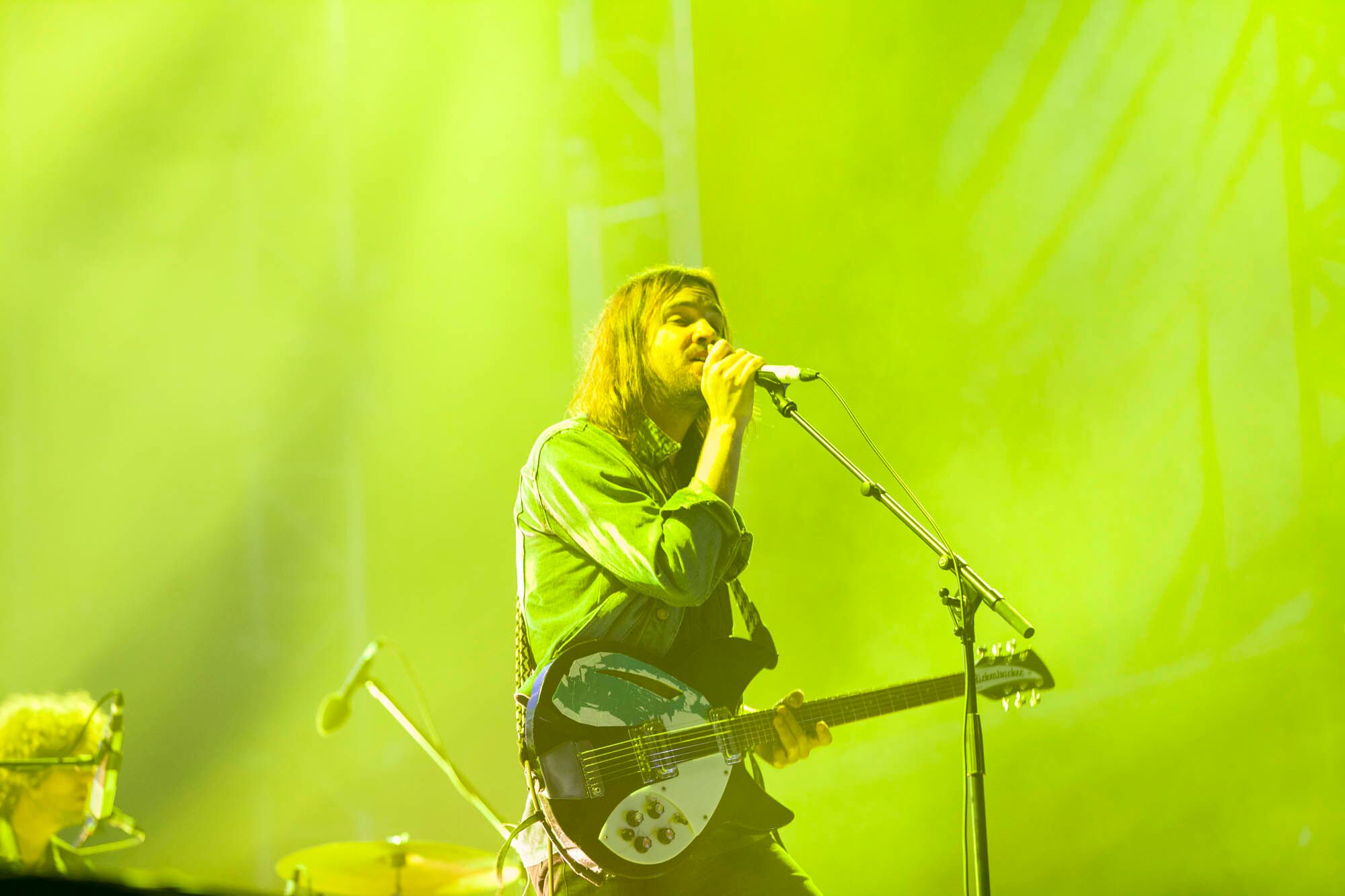 The festival kicked off Thursday, with a line-up that was eclectic or ramshackle, depending on how you view these things. Tame Impala sounded as lovely as they are wont to do. The set was heavily reliant on latest album Currents and 2012’s Lonerism. Kevin Parker, the mastermind behind the psychedelic swirls was in a puckish mood, claiming he “made a thing” by saying we were just outside Bogotá. Not totally convinced if that constitutes a thing - and it doesn’t take much to constitute a thing - but there you go, people whooped. “Elephant” got people stomping, and I got to do a dance I invented a while back where I put my arm to my face like Nelly's trunk and sway to the beat. It hasn’t caught on yet, but there’s time. “Feels Like We Only Go Backwards” is a particular delight. Good-o.

Also up was Albert Hammond Jr, who was fun enough. His music is more interesting than recent Strokes output, but then so is mildew. Of Monsters And Men played that song with that riff and everyone hopped.

Mumford & Sons headlined, following the continental model of having your headliners play around midnight, and then letting the party crack on after. They were, as you’d expect, fucking awful. That’s not a slight on their performance but their existence. I know it’s cliché to hate on them, but really, they are pap and will be the first with their backs to the wall when the revolution comes. Banjos and over-privileged tosspots do not mix and they never will. (On a point of information, they did draw a big crowd that seemed to like them. And in my drunk state, I did in a moment of madness sing along to "I Will”.) 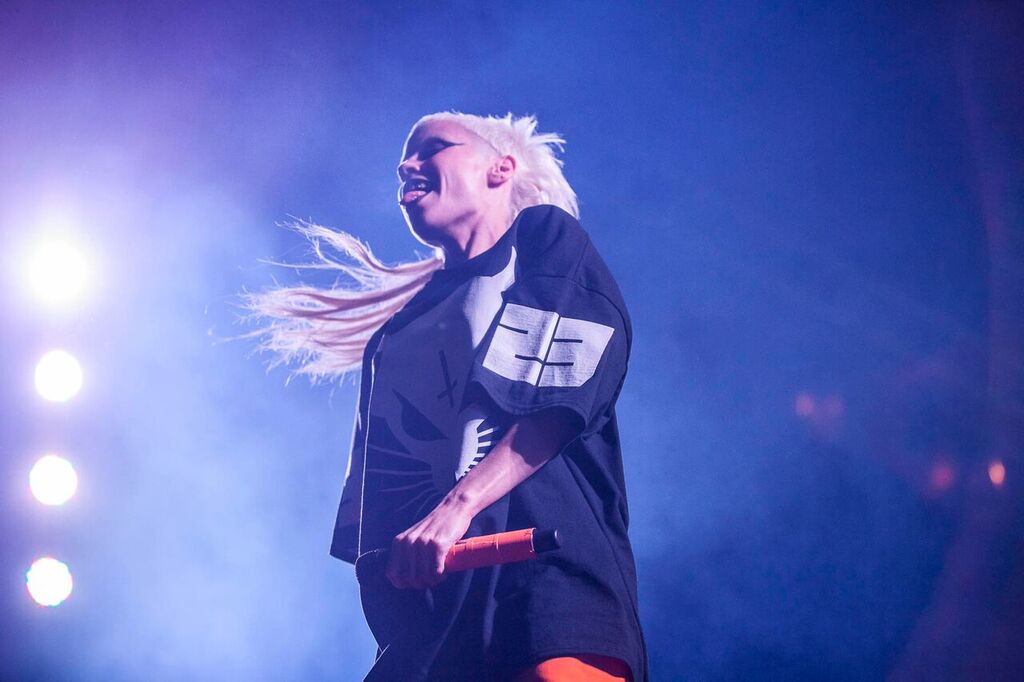 Die Antwoord were up next, and by jove they were fun, packing so much snarl into everything they do. There was a cracking beatbox battle before “Fatty Boom Boom”, and the big screen was broadcasting charmingly adorable cartoons, but with comedy-big willies. The South African duo never let the energy dwindle, with some crowdsurfing and “fuck your rules” call-and-responses. They also stripped down to their undies, which was smart because it was jolly hot in that tent.

Day two saw London soulsters Jungle, steal most of the limelight. Their hits were ruddy wünderbar, with “Julia” and “Can’t Get Enough” stealing the show. They’re in festival-hoking form too, shouting, “I can tell you’re on some great ecstasy tonight!”

Noel Gallagher did his thing, where he played his new High Flying Birds songs that sound like his old Oasis songs but worse, and then some of his old Oasis songs that sound like new High Flying Birds songs but better. A cracking combination, though he did get the audience to sing the choruses so he doesn’t have to. You say you’re sorry for not coming here before, but you could give a teeny bit of a toss, Noel. “Half The World Away” was a particular delight. 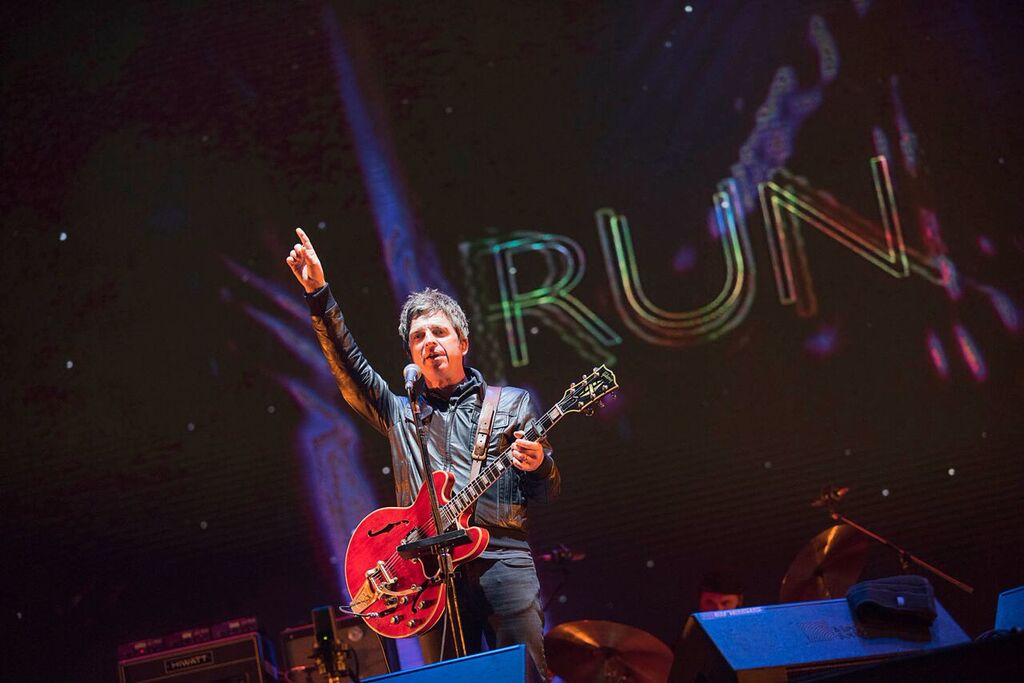 Florence & The Machine were nice - and that really is the strongest word I can find for them - playing enough festival-primed anthems to keep everyone swaying around like the boozed-up loons they are. At one point, with a voice that is more received pronunciation than the shipping report, Florence implores the audience to hug the person next to them and say they love them. What she’s missed is that this is Colombia; they’ve been doing that all weekend. “Dog Days Are Over” will always be rapturously popping, with tonight no exception.

Elsewhere on the bill, Alabama Shakes were expectedly brilliant. 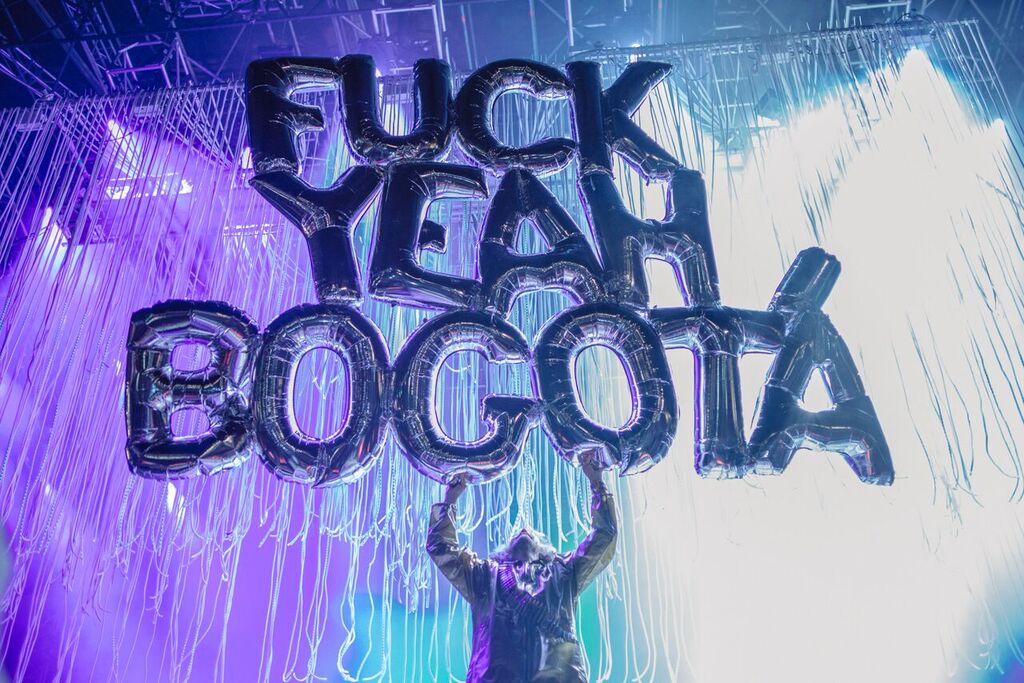 The last day, with most of the crowd running on empty, relied on some big-hitting festival barnstormers; the sort that can drag 20,000 half-cut monged-out latinos out of their stupor and into some frenzied trojan blood cult. Enter then, stage left, The Flaming Lips. Wayne Coyne and his madcap band of Oklahoma nonsense-merchants have been peddling their barmily joyous schtick for so long now it’s easy to forget how good they are at it. Belters like “The Yeah Yeah Yeah Song” and “Yoshimi Battles The Pink Robots” are already primed to set a crowd abuzz, but factor in crowdsurfing zorb balls and billowing LED capes and then we’ve got a party.

Colombian rockers Los Petit Fellas were also cracking fun. They have a song called “The Love of My Life”, which is about football. I can respect the moxie. They also played a mash-up of famous guitar riffs, taking in “Johnny B Goode”, “Can’t Stop” by the Red Hot Chilli Peppers, and that lick from “Pulp Fiction”. 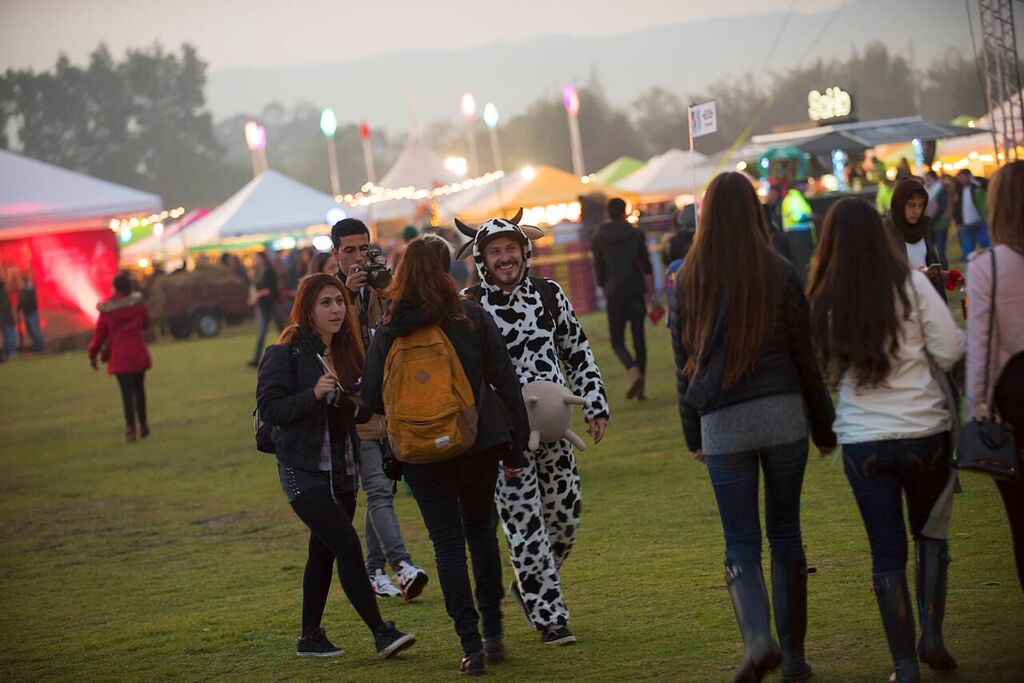 Kygo keeps the revelry going in a way that superstar DJs should: by playing floor-filler after floor-filler. The tent is packed out to the rafters, and hits like “I See Fire” and “Firestone” live up to their titles: it gets sticky hot. My good pal lost his phone in the madness, but responded, “I don’t care, I wanna get fucked up!” Don’t ever change, Jose. 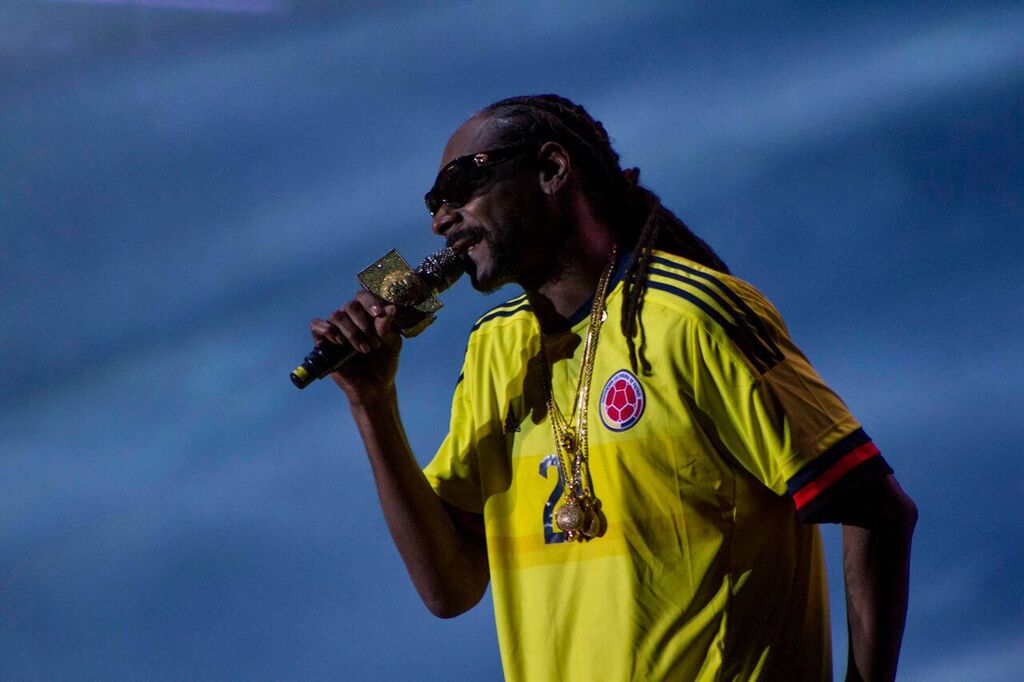 Then we had Snoop Dogg, who is impossible to take seriously. He wore a Colombian football shirt, which always garners favor. David Guetta did it too, though taking after him isn’t necessarily a good thing. Snoop’s popular here though and “Drop It Like It’s Hot”, “Bitch Please”, and “Wet” are standouts, even if they ooze with flagrant, dumb, misogyny.

The night and festival closes out with Jack Ü, the hybrid of Skrillex and Diplo that isn’t as bad as it sounds on paper, and Nicolas Jaar, who provides something equally electronic though infinitely more palatable.

So that was our lot, and what an exhaustingly wonderful ball we had. I strode out of the mud, past a swanky fireworks display, gallantly wellington-booted, with a big shit-eating grin on my face that says I’ll do it all again next year. Till then!