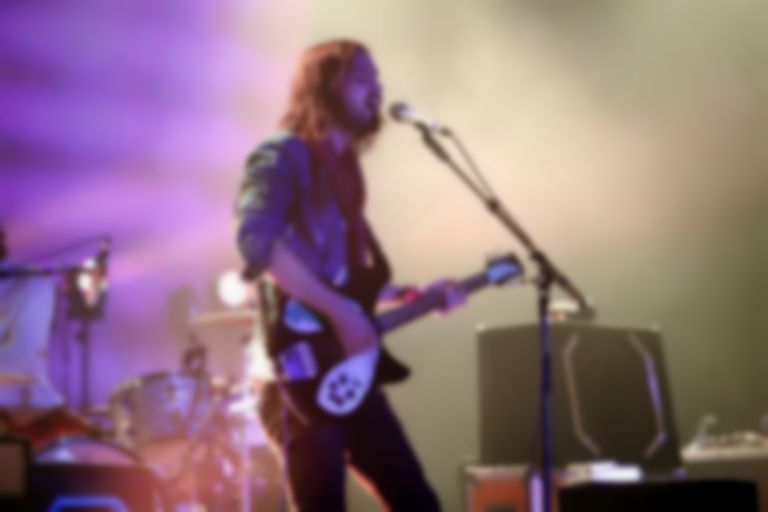 Celebrating ten years has to involve something special, but the organisers of End of the Road festival haven't had any trouble in providing its attendees with some truly wonderful musical experiences for 2015's anniversary gathering.

Nestled away on the Garden stage, Juan Wauters brought his quaintly soul-searching music to life with an endearing charm. On the opposite side of the site, Oscar invigorated the crowd with contagious indie-pop and infectious choruses. "We've been waiting all summer to be here," frontman Oscar Scheller told his audience, cementing the sense of celebration by inviting previous band member Florence van Camerijk on stage for the closing number.

Taking to the stage with a homemade t-shirt bearing the statement "REFUGEES WELCOME", Nadine Shah made poignant use of her platform. "Show solidarity with the refugees to the people who couldn't give a shit!" she incited in a mid-set pause, before launching back in to her spellbinding performance. The King Khan & BBQ Show's combination of balls-out rock and roll and intimate blues offered something that whilst not entirely appropriate for young audiences proved entirely captivating.

With the early afternoon cleaned up by country rocker Andrew Combs, Welsh wonder Meiryl Jones - whose songs were enhanced with lush instrumentation including brass and harpsichord - and the visceral brilliance of Mackenzie Scott's Torres, the evening session of End of the Road was opened up in majestic style by the luminous Natalie Prass who, alongside louder takes on "Bird of Prey" and "It Is You", plucked two audience members dressed as Marty McFly and Doc Brown from Back to the Future and launched into an impromptu take on "Johnny B Goode", with guitarist Trey Pollard completely in his element.

If that was too relaxed for some audience members, the Big Top played host to Canadian punks Metz who careered through songs from METZ and METZ II complete with a light show akin to a visual assault. More at home in a basement venue, the trio didn't let this affect their performance as they filled the tent with unrelenting noise. Equally as passionate but slightly less confrontational, Django Django are pretty much the perfect festival act and the large crowd at Woods lapped up the likes of "Default", which was doubly enjoyed thanks to the band messing up their first take on the definitive/albatross Djangos track.

Later in the evening Fuzz brought their psychedelic opuses to the masses, extended instrumentals holding the audience captivated. For those staying out late, East India Youth brought the music blasting into the next day. Bursting with energy from behind a laptop, synthesiser, and electric guitar, he kept people grooving past the midnight hour.

The Garden Stage was closed by a pure and golden show from veteran slowcore act Low. Twenty years into their career the band has plenty of beautiful songs to cherry pick from, and given this was an outdoor performance Alan Sparhawk, Mimi Parker and Steve Garrington chose to go with some of the heavier songs from their later period. So the likes of "Plastic Cup" and "Monkey" appeared alongside songs from new album Ones and Sixes, the pick of which on record is "Spanish Translation" and it was no different on stage. Despite Sparhawk wringing feedback from his guitar at any opportunity,it never overshadowed the gorgeous harmonies that he and wife Parker create together. A special band, Low's performance cemented their position as one of the most consistently wonderful acts around.

Making their UK festival headline debut, Tame Impala showcased exactly why they're at the top of their game. New favourites and adored classics echoed through the fields as the band performed a seemingly-endless series of hits. Crowdsurfers hit the air, mosh pits broke out centre-crowd, and the band who've made their name with alternative psychedelia transformed the festival into an extended dance party.