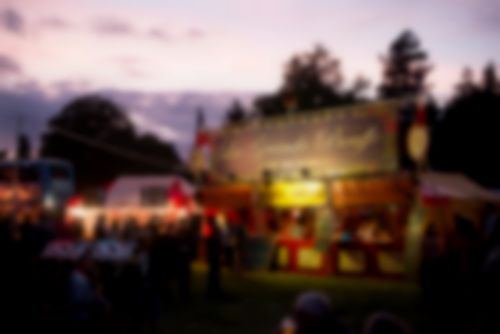 As the sun rises on the second day of End of The Road Festival, we look back on Friday’s highlights.

Opening the day with their subtle, melodic guitar-leaning pop, WALL shine in bursts. Lyla Foy’s voice is a beautiful, deep, brooding thing that when delivered with full confidence pulls together disparate, bobbing glitches, crackled synths and new romantic bass grooves into one wonderfully seductive affair. The 80s pop starlet moments are captivating and closer ‘Honey Moon’ is the perfect song to have ringing in our ears as we head out into the mid day sun. Lauren Down

The first real, warming sunlight of the weekend spills onto the festival precisely as Landshapes open the main stage. After a slightly shambolic introduction, the four-piece’s tight, bass-led and harmony-heavy indie rock quickly finds its feet, despite suffering slightly from a severe imbalance of vocal to instrument volume. It’s soon attended to, however, and the band’s superb grasp of groove provides a welcome burst of energy to those members of the audience still rubbing sleep from their eyes. Merlin Jobst 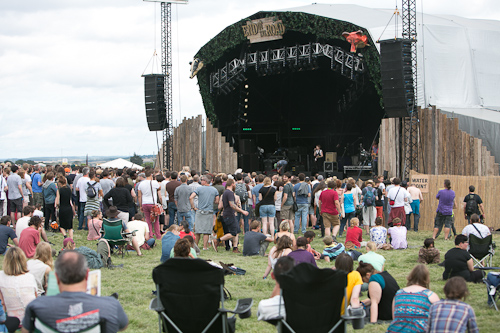 PINS
PINS are one of those bands who don’t trouble themselves too much with variety, but the conviction they show for the girl-gang punk path they’ve chosen is engaging enough for it not to matter. It’s a high-energy performance, and the crowd seem to love it, but as the songs flash by in all their uncomplicated cool, the same-track vocals and rhythms do verge on the predictable. Alan Pedder

Congestion in the wake of a motorway crash nearly put a stop to Braids’ performance before it even began, but the Canadian trio were not going to let a little thing like a total lack of preparation stop them from treating the packed, sweaty Big Top to a wonderfully elegant, relaxed display — albeit a short one. So confident are Braids in the evolution of their ‘natural electronics’ that more than one new-new song (newer than the very recent album, Flourish//Perish) was aired, allowing for the only glimpse of frustration to show when one faltered slightly and had to be restarted. Overall, though, it was stirring, beautiful stuff. Alan Pedder 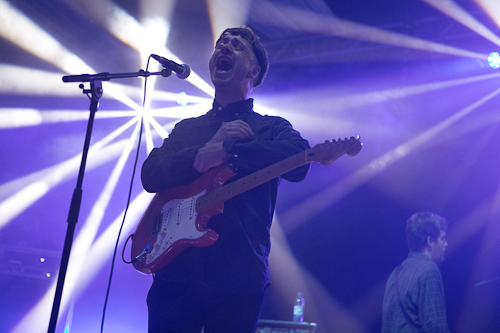 Given the searing intimacy of their recent live shows, the question we’re asking of M O N E Y is whether they can find that same connect when shifted from tiny Dalston bunkers to cavernous Dorset tents. The answer, pretty much, is “yep”. There may not quite be that stare-in-your-eyes immediacy but in these gently anthemic, soul-huggingly inclusive moments, environment is rendered irrelevant and the same conclusion is reached; this band are really quite special.

There may be a lack of precarious thrills’n’spills to the Savages live experience, but through their pointed hints of 80s Goth and super-slick proficiency they exude enough slow burning menace, and just enough underlying wit to justify their headline slot and keep a rammed tent enraptured and dancing. Set-closer ‘Husbands’ captures the Savages magic perfectly; all intensity, all commitment, all dark pop magic. 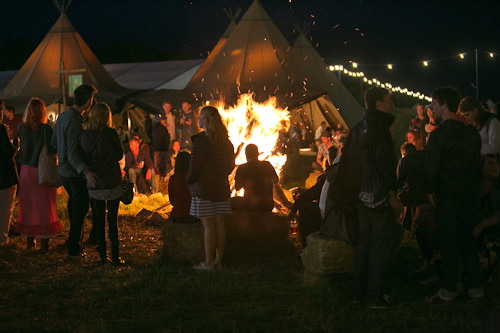 “Is it good enough? I was biting my nails for the whole 7 hour flight over here…” says Daniel Lefkowitz, performing under his newly acquired solo moniker of Futur Primitif. He’s addressing a packed out crowd in the Tipi Tent, with fans of his previous band The Low Anthem having turned out en masse to hear the musician’s latest offerings. As Lefkowitz makes his way through tracks from his debut solo record, his confidence grows and the crowd are audibly appreciative of his soul-laden brand of gently picked Americana. Francine Gorman

Is there a better meteorological metaphor for Eels than a double rainbow? Taking a sonically bright turn in the face of personal disaster might summate the mission of E’s back catalogue, and with a characteristically bold pre headline set, they prove there’s few better in such a role. Taking to the stage in full matching track suits, they deliver a bluesy, punchy set, led by E’s well honed knack for audience interaction. With the grinding version of Fleetwood Mac ‘s ‘Oh Well’ (proving Haim’s taste credentials in the light of their now staple cover) piqued with the feel-good swoon of ‘Fresh Feeling’, it’s a wonderfully glorious hour showing the capacity and breadth of these alternative stalwarts. Sam Briggs

A hugely adoring crowd flood the Garden stage for Matthew E. White’s lush Americana. A promising entry for the festival’s best beard, White is backed by a full band - the rich sound feeling intrinsic, rather than simply flowery addition, and lift White’s soulful folk gospel to greater heights. Mainly delivering tracks from debut Big Inner, his genuine delivery packs a weight worthy of far more than the humble beginner he pens himself as. If there’s any trade off in the intimacy stakes consequent of the bigger sound, it’s only in favour of the width in the heart warming power of his big-grin fronted inclusivity. Sam Briggs

The final band to appear on the Garden stage tonight are an EOTR festival favourite, returning to Dorset to present their critically acclaimed 2012 album Pirimida. Working their way through tracks such as ‘Hollow Mountain’ and ‘Between The Walls’, the Danish three piece – expanded to six in a live capacity – are sonically perfect. Bass tones resonate towards the trees, masterful harmonies soar over the top of intricate rhythms and with each flash of a stage light, the strange, fine misty rain descending upon the crowd is illuminated. Efterklang are in a typically charming mood, offering gifts to the crowd that were collected at their previous show in Wintertour, Switzerland and graciously thanking the crowd for choosing to watch them over ‘one of our heroes, David Byrne’. The band take their final bow and exit the stage smiling, leaving a rapturous, and thoroughly won over crowd behind. Francine Gorman 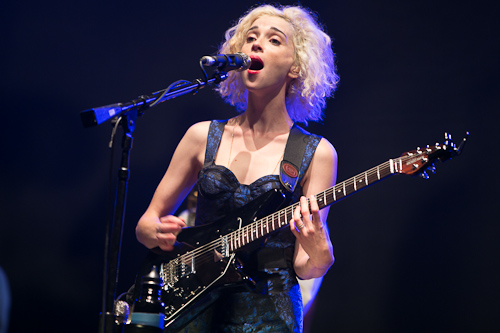 Over a dark stage, a taped recording of David Byrne politely asks that people respect the people around them and not spend the show behind ‘gadgets’. “We’re very proud of this show,” it says warmly “and we hope you enjoy it.” It’s obvious why; the still-somewhat unbelievable pair have created a real theatrical production. Opening with their singalong single ‘Who’ and performing a range of both Talking Heads and St. Vincent songs throughout, with an enormous brass band they work together to deliver a flawless production. They’re fantastic at passing the baton to each other, such as when Clarke dominates the stage to deliver her song ‘Marrow’. They can share the spotlight brilliantly, too, such as for the storming rendition of Talking Heads’ ‘Burning Down the House’ that closes the main set. Merlin Jobst