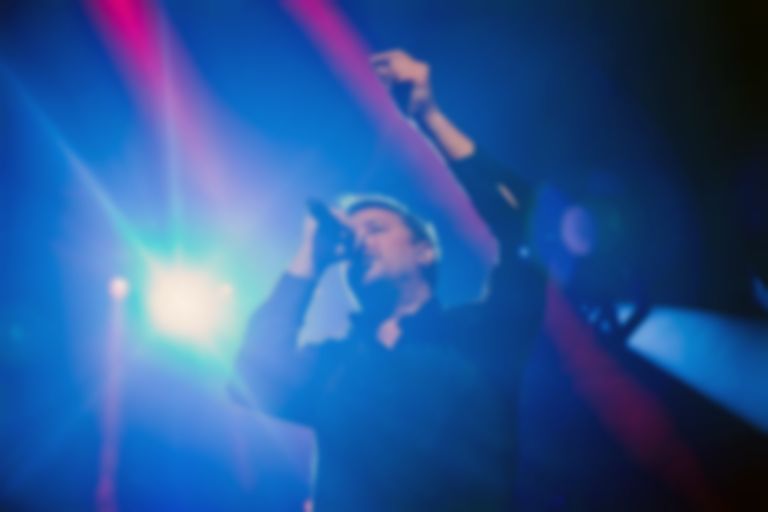 "Is this the best venue in town? And are we in the greatest city for music in the world?"

Forgive Guy Garvey the indulgence for a minute. After all, he's now very much a part of this town's musical heritage; the bar up in the circle at Manchester's iconic Apollo is bedecked with huge, backlit images of local heroes. The usual suspects are all present and correct - Liam Gallagher, Morrissey, Ian Brown. And right alongside them, Garvey. If that doesn't make you a Manchester institution, what does?

In actual fact, he's more of one than any of his fellow wall-adorners in that bar. The Gallaghers legged it to London at the first opportunity; Morrissey has lived abroad for many years. Ian Brown's actually from Warrington, regardless of what his accent might desperately suggest to the contrary. Garvey has lived in and written about this city with a tremendously endearing, and often bittersweet, warmth for the entirety of Elbow's twenty year career.

Until now! He's splitting his time between Manchester and London these days, having married the actress Rachael Stirling, who by tonight (20 March) is so heavily pregnant that it might not have been a shock if a stagehand had run across to Garvey's ear mid-show to deliver some urgent news. This is new territory for the frontman, who remained heartbroken on 2014's The Take Off and Landing of Everything as all of his bandmates were in the process of rising young families. When he hits the line "I'm having a baby" from that album's "Fly Boy Blue/Lunette", a cheer goes up.

These are unprecedented days for the rest of the group, too; drummer Richard Jupp took his leave, for good, right around the time that work began on their seventh LP (and second number one) Little Fictions. Movingly, those left standing play opener "Gentle Storm" in a manner that pronounces Jupp's absence; just the four of them, standing Kraftwerk-style in front of a curtain, with producer and keyboardist Craig Potter ably handling percussion.

The rest of the show's an altogether more expansive affair, with Al Reeves filling in behind the kit and the obligatory string backing on hand, too. This is a venue and, by way of extension, crowd that are intimately acquainted with the Elbow catalogue and as evergreen as some of the hits still sound - "The Bones of You", "Mirrorball", Garvey's lyrical masterpiece "Great Expectations" - the real frisson seems to be raised by the new cuts.

The latest record's title track is a mid-set revelation, at once sparse and chaotic, a sprawling eight-minute epic that simmers towards a hectic crescendo. "Kindling", written for Stirling and set on the Manchester to London train, is sumptuous, the swell of the closing moments matched only by that of Garvey's perennially romantic heart. 'All Disco' is the inevitable moment crafted purely for arms-aloft singalong, but it pulls it off with much more charm than "Open Arms" ever did - or the clunky "New York Morning" for that matter.

It doesn't feel presumptuous by now to suggest that Elbow will always be guaranteed a generous welcome in their hometown, and especially at the always-pretty Apollo; it's lovely, therefore, to see that it's more about care than complacency when they do make their way back. Back in January, Garvey recapped the band's first experience at the venue in an interview with Drowned in Sound; they supported the Manic Street Preachers for a couple of nights, and were met with chants of "you're shit and you know you are" before they'd even had chance to make their own argument. How times have changed.