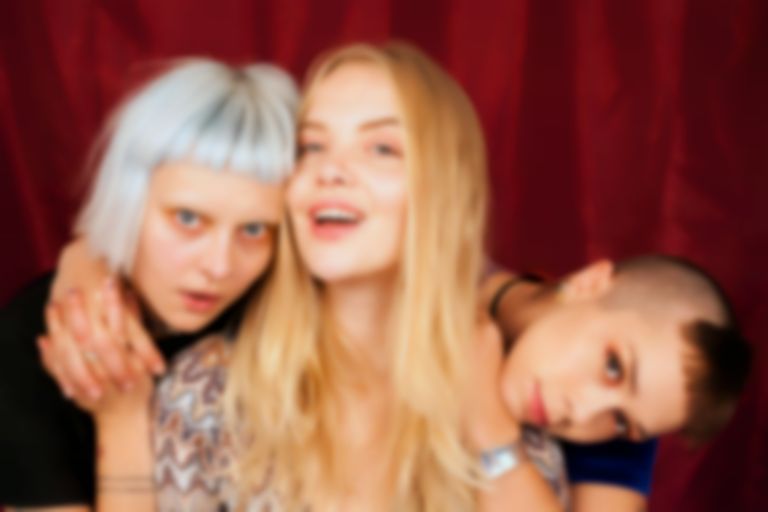 The rise of #metoo, #timesup and the Safe Gigs For Women initiative has forced the music industry to take a hard look at itself. There couldn’t have been a more potent moment for Icelandic-Brightonian trio Dream Wife to drop their debut album, and elbow their way into the middle of the conversation.

Much like Fever Ray’s incredible gig the night before which operated on a “women to the front basis”, tonight is another celebration of empowerment and what it means to identify as female. “I want to see a river of bad bitches flowing to the front of the room,” announces Wife leader and vocalist Rakel Mjöll. “Guys, I need you to show some respect and move the fuck away.”

Determined to create a safe space where women can mosh and party without fear of harassment, Dream Wife are unapologetic about fighting for what’s right. Their self-titled debut might be packed with glimmering, sugar-sweet hooks but beneath its playful personality and anthemic choruses there’s a razor sharp edge. Any man down the front refusing to comply with Mjöll’s request, and yes, there are a few, are moved away by security under her formidable gaze. The sad fact that idiots could be offended by being asked to move for a woman, by a woman at a live gig is proof of why Dream Wife are so bloody important. Along with bands like Dream Nails and Pussy Liquor, the latter who provided tonight’s incendiary support along with indie-poppers whenyoung, their punk pop is tearing apart gender norms and taking a clumpy boot to misogyny. That’s what tonight is all about.

Sure they’ve got attitude and a message you can shout from the rooftops with "Somebody"’s defiant refrain, “I am not a body, I am somebody”, leading the first of the all-girl mosh pits. But Heaven wouldn’t be sold out tonight unless the songs were absolutely cracking, which of course they are. The barbed rebellion of "Let’s Make Out" and "FUU" evoke Karen O’s effervescent cool and the snotty, hedonistic punk of L7‪ and Bikini Kill. On the other side of their coin, Alice Go’s nimble guitar on "Kids" and "Spend The Night" fizzes and fuzzes ‬against Bella Podpadec‘s sassy bass. The band are a blur of tightly coiled, infectious energy, effortlessly cool yet inviting a sense of sisterhood solidarity. With just one album under their belts they’re already the full package - and exactly what the world needs right now.