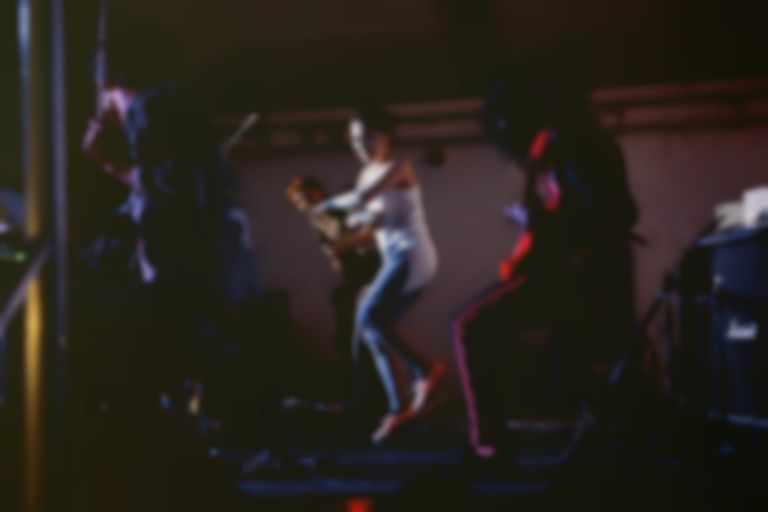 Deerhoof are a difficult band to categorise, because they move so fast; over a couple of decades, they’ve hit a momentum of nearly an album a year. Loosely they’re described as being a punk rock outfit, but everyone who’s been reduced to labelling them as this must have their reservations. It’s too simplistic. But then, it’s difficult to pin them down any further.

You can call them quirky, angular, bouncy and wacky. However, until tonight, I hadn’t ever really thought of them as being challenging. Nor would I have expected to think of their strongest influence as being something more like jazz rather than punk.

Long stretches of this are quite hard work, and sound easily as difficult for the band themselves. Stunningly good moments of gradual tempo reductions; contorted time signatures and sections where the rhythm section just suddenly drops out of action altogether are commonplace. Their shock and awe tactics have the desired effect. This is a fantastic performance from a tightly gelled unit, working at an incredibly high standard of intuitive musicianship.

On record, the focus can easily become Satomi Matsuzaki’s childlike voice and mnemonic melodies. Tonight it’s one of the least important components. This is partly because of some niggling sound issues making the mix muddier than it might be, leaving them battling upstream against their own idiosyncrasies from time to time, and partly because the thrash of the band would have drowned her out either way. But it’s also because they’re so distractingly dazzling as instrumentalists. Guitar lines lurch, bass lines baffle, and songs make radical transformations. At times, it tickles the water of avante garde composition.

If this wasn’t what you signed up for, this might’ve been quite a long, pretentious hour. Albums like Breakup Song are concise, succinct and direct; you might not have had tonight’s set in mind, based on their recorded output. While they were hardily hostile towards their audience – closing with the rousing “The Perfect Me”, and letting regular bona fide grooves bubble up in stuff like “We Do Parties” – they don’t typically gesture towards the freeform, meandering spirit of tonight’s set.

Nonetheless, for my money, this was braver, bolder and more thrilling than what I ever expected from a Deerhoof performance. It’s the sort of set which suddenly makes clear why Deerhoof release albums at such a rate - they’re a restlessly creative band, overflowing with ideas, and weighted with proficiency. Tonight was glorious proof of their creative vitality.