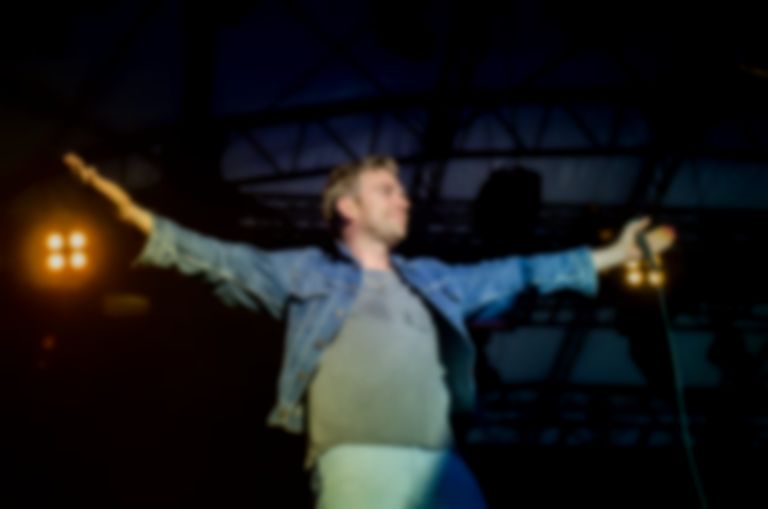 Gorillaz, Mali Music, monkey operas, scores for Icelandic independent cinema, The Good The Bad & The Queen, the theme tune for Sunnyside Farm, Rocket Juice and the Moon, an album for Bobby Womack, a collaboration with Silver Apples, Democrazy, and another opera about an alchemist. There are even people who think he wrote the first Elastica record. Oh, and there's Blur. Oh, and a load of stuff I've probably forgotten about. Damon Albarn's CV is so sprawling any potential employer in their right mind would suspect he was bullshitting.

People who like all of this stuff are either commendably wide eyed in their approach to music or were, like me, bitten with the Blur bug at an early age and have accepted Albarn Admiration as a terminal condition. Thankfully, the ratio of good music to bad it’s provided is far in favour of the former over the latter, and what it lacks in coherence is made up for by sheer breadth of imagination. Much the same could be said about tonight's show.

Though considerable attention is paid to this year’s debut solo album proper Everyday Robots - see, knew I forgot one - tonight is a celebration of all aspects of the Damon Albarn canon; its darkest corners, brightest brilliance, and confusing left turns all given equal prominence. Visibly nervous and humbled by the scale of the event - and fuck me, this room really is gorgeous - Albarn announces his intention to treat the show as if he and backing band The Heavy Seas are playing "just a really big pub", soon embarking on his trademark shtick of soaking the front few rows of the audience in litres of bottled water, whether they like it or not.

Everyday Robots is a solemn album, but The Heavy Seas are a band who only operate with swagger, and Albarn gives as much oompah to the likes of the title track and "Lonely Press Play" as he once reserved for "Parklife" (and given the amount of guests appearing later in the night, a trick was surely missed by not inviting Russell Brand up to do his version). It might not suit the songs particularly well, but it certainly befits the man, who appears in his element.

So, you pick the bits of the Damon Songbook you enjoy most, and the memories of seeing that performed - The Good, The Bad and The Queen's "Kingdom of Doom", a guest appearance from Afel Bocoum on "Sunset Coming On" and all the Blur bits, personally - will live long in the memory. The parts you're less emotionally attached to - for me, anything that was initially performed by a cartoon monkey, if I'm honest – still work in virtue of displaying just how many strings there are to the bow of this at once most complex and populist composer, even if the songs seem incongruous when juxtaposed with so much of the subtle loveliness of the rest of his work.

The list of guests gets silly. Making Kano come on for "Clint Eastwood" right after De La Soul are so great popping up on "Feel Good Inc." is slightly unfair on the London lad - especially as Albarn suspects he might have had a few jars prior (he tells us he's just happy Wellbeck scored for England earlier in the night) - and to hear Brian Eno actually singing (on "Heavy Seas Of Love") rather than making strange ambient whispers is a true treat, because the fellow really does have a lovely, warm baritone of a voice. But it's the appearance of Blur bandmate Graham Coxon for three songs - a lovely acoustic guitar and piano duet for "End of a Century", the bizarre but highly welcome inclusion of long forgotten "Stereotypes" b-side "The Man Who Left Himself" and a version of "Tender" that couldn't have been more beautiful if this actually was a Blur gig - that provides the show its peak.

It's only when presented in this manner that the scale and brilliant peculiarity of all Albarn's done, and continues to do, really hits home. As hard pressed as you'd be to find someone who admired every note of his music, I'd be just as worried about the mentality of someone who enjoyed none. Tonight's setting is a national treasure, and that's also a title Albarn's well on the way to cementing for himself.