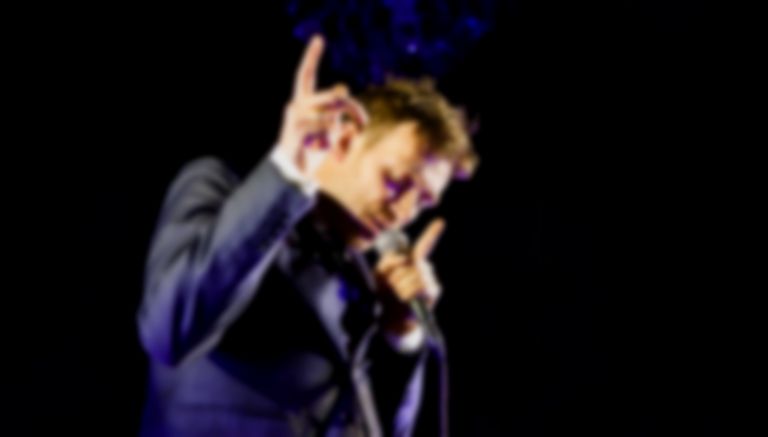 It’s a sight familiar to anyone who’s ever seen Damon Albarn perform live before; glaring, red-faced with his mouth wide open bellowing at an audience to “COME ON!”, jumping up and down on the spot, pouring bottles of water over the front ten or so rows. But this isn’t Glastonbury, Hyde Park or one of the many festivals worldwide Blur have been playing over the past year. It’s the faded decadence of South London’s Rivoli Ballroom on a Wednesday night. And everyone’s getting quite wet.

Someone should probably tap him on the shoulder and whisper “not that kind of gig, mate”, but it’s not going to be me. Standing just out of the firing line of what must have been at least three litres of Evian that get sprayed on those nearest the stage, the only thing hampering my enjoyment of this at times puzzling, often gorgeous set is the sheer heat of the venue, a problem that seems to quickly dawn on the sharply-suited Albarn, too (“That’s it, I’m going back to t-shirts”, he quips).

Though coming mere days after the release of his first solo album proper Everyday Robots, this is –Monkey operas and independent Icelandic film scores aside – more of an exploration of the sheer breadth of the Damon Albarn Songbook than it is any celebration of his new record. Damon seems unsure how to play it at first, resorting to tried and tested leapin’ an’ a hollerin’, but it’s not behaviour that befits the solemn beauty of much of his best work, a fair portion of which we’re treated to tonight.

The new material shines especially brightly, with four piece backing band The Heavy Seas adding a surprising amount of bassy depth to charmingly melodious opener “Lonely Press Play”, knowing when to sit back and let the lyrics shine on album centrepiece “Hollow Ponds”, and knocking the album’s technologically-wary title track right out of the park (the person who foolishly requests a selfie with Damon prior to its airing gets a polite but forceful reply of “is that what this has come to – you can’t watch an hour and twenty minutes of music without needing to take a selfie?”).

Yet, eager as ever to get out of his comfort zone, Albarn himself seems more interested in seeing if he can remember long-forgotten numbers from his back catalogue than thrusting its latest chapter down our throats. It makes for an incredibly impressive, if disjointed, set – remarkable in its display of the sheer variety of music this chap’s turned his hand to, and yet uneven in that much of it really doesn’t fit with the rest.

Even rarely-aired Gorillaz numbers like “Slow Country” (unplayed in over a decade) and “Kids With Guns” seem like kids stuff compared to The Good The Bad and The Queen’s “History Song”, “Kingdom of Doom” and “Three Changes”, a trio of tunes that serve as a timely reminder to revisit a truly fantastic, vastly underrated record.

It’s endearingly all over the place. There’s a guest spot from Kano on “Clint Eastwood” for a few minutes of Big Band Grime. There’s an eight piece gospel choir who lift “Mr. Tembo” and “Heavy Seas of Love” just that little bit more skyward. A beautiful “Poison” reminds us that not everything Rocket Juice and The Moon did was rubbish. There’s also an amazing rendition of “All Your Life”, one of Blur’s greatest B-sides that practically nobody other than me could have wanted to hear. And in between it all we get Damon sat alone at a piano, gently cooing “Out Of Time” like it’s the most gorgeous thing ever, which perhaps it actually was.

Albarn implored the audience at the start of the set not to yell updates about his team Chelsea’s fortunes in the Champions League, lest it ruin his concentration. But as the man in shorts and a Fred Perry polo shirt behind me bellowed along atonally to a closing, solo piano rendition of Blur’s “This Is A Low”, recasting it as some boorish terrace anthem, I was struck once again by the stylistic diversity of this peculiar but faintly magical set, and start humming to myself a little football chant of my own; “Damon Albarn - he plays what he wants”.