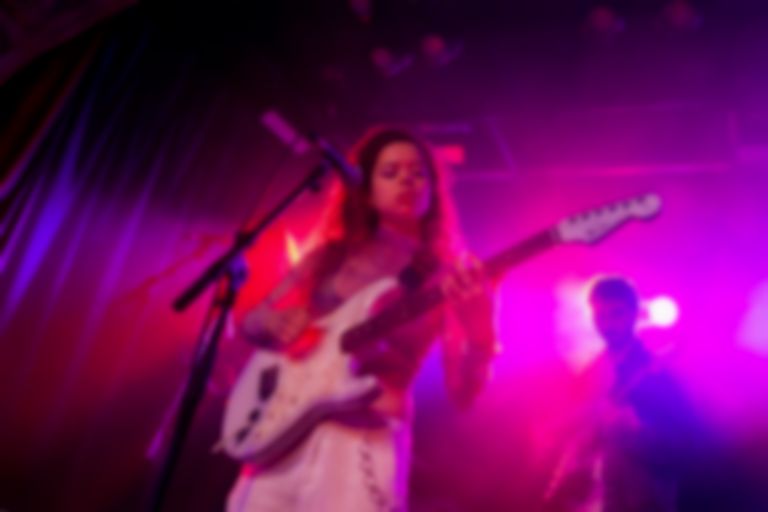 For years, Camden’s legendary Jazz Café has played host to some of the biggest names in the game. Tonight, Nilüfer Yanya stakes a claim for the future.

Supported by her Blue Flowers labelmates, Westerman and Chet Baker-ish crooner Puma Blue, Yanya delivers a set that blends a natural talent for hooky songwriting with a skilful interplay between polished, jazz-inflected guitar work and an unstudied, emotive vocal style.

She’s joined on that hallowed stage by a full band, who provide an endlessly adaptable backing to the night’s proceedings. But Yanya starts the set alone, knocking out “Angels” – a punkish, acerbic number – to a sold-out room who, after all, have come to see a songwriter whose gift for intimate, relatable pop is one of her greatest assets. It’s not the strongest material we’ll hear tonight, but it serves to create an instant bond between artist and audience that adds an extra layer of relevance to the shinier, catchier tunes to follow.

First among these is “Small Crimes”, a bittersweet ode to teenage shoplifting that slides and undulates through artfully placed inversions into a chiming chorus which gives the The xx a run for their money on the “quiet intensity” front.

“The Florist”, which leads Yanya’s latest EP, Plant Feed, is up next. It’s a beautifully arranged bouquet (sorry) of hooks that really benefits from the live treatment, bringing her bruised vocal to the fore at the same time as doubling down on the rhythmic shifts that make it such an exciting listen on record.

In amongst the established winners, we’re treated to a couple of as-yet-unreleased tracks that show serious promise for 2018. The best of these is “Thanks 4 Nothing”, which follows a sunny hit of Latin-esque syncopation with a powerhouse chorus that bodes well for the nation’s summer playlists. There’s even a sax solo, courtesy of long-time collaborator Jazzi Bobbi, which lifts the tune up to the rafters.

Beyond Yanya’s obvious skill as a writer and arranger, it’s her adept control of the set’s dynamics that really helps to elevate this show above standard singer-songwriter fare. The evening’s closer, recent single “Baby Luv”, is a prime example. There, staccato stabs bleed and build in to a tense and textured chant of a chorus, before crashing back down to Earth to expose the vulnerability at the core of the song.

The only weak link that springs to mind in an otherwise excellent show is Yanya’s much-vaunted cover of “Hey” by Pixies. While it’s a perfectly pleasant listen, it lacks the vicious psychosexual drama at the heart of the original, sometimes veering in to chillout compilation territory. With so many catchy, self-penned efforts under her belt, it seems like an unnecessary note of caution for an artist who seems to know exactly who she is.