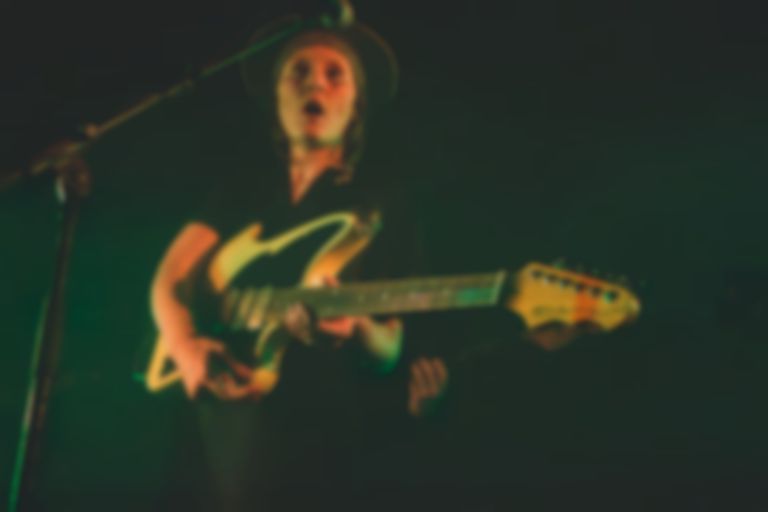 There are supergroups - often amongst the most awfully indulgent excesses in music - and there’s Cate Le Bon and her brilliant Banana ensemble.

As well as performing the forthcoming and best album of her career Crab Day in full, Le Bon and Banana are also the support act, delivering four instrumental, largely improvised pieces that are as bonkers as they are brilliant. Steinbrick takes the front of the stage and starts by thanking the soundman for “the thankless task of making this sound like something.” With no drums and lots of glockenspiel, Banana are sparse and spectral. It’s very arty and psychedelic but also rather joyous too.

After a brief intermission the Crab Day section of the set is preceded by a wonderfully surreal short film scored with instrumental versions of songs from the album, featuring Le Bon trapped in a mansion full of very strange people. The six of them then reappear, all wearing black (with the exception of Mozgawa, who is dressed in white, Le Bon quips "she obviously missed the costume memo") and wearing straw hats. As they tear into the title-track with its scratching, Velvet Underground guitars, it’s clear why Le Bon’s gone to such trouble to get them to move all sorts of schedules to play together, they sound excellent, incredibly powerful, but tremendously controlled.

Such élan is refined on “Love Is Not Love”, one of several songs from Crab Day that dwells on matters of the heart. Featuring the first of a continual swapping of instruments this evening, Hawkline plays a stunningly beautiful and melancholy guitar line and there’s a real sadness to the vocal, with a line such as “Sing my name again love,” contrasting with the heart-breaking “I don’t know how to love you.”

The swapping of instruments on the suitably titled “Wonderful” doesn’t go as smoothly, with Le Bon deadpanning “Sometimes the changes are really slick… but it’s a small stage and I’ve got old hands”. Featuring a careering guitar riff that Graham Coxon would be proud of, it builds to a heady climax and again one can’t help but be amazed by the playing, with Mozgawa’s furious drumming on the coda especially spectacular.

On The Beatles-infused “I Was Born On The Wrong Day” you realise you’re watching some of the best musicians around playing some of the songs of the year. There’s a touching joy between the six of them and obvious pride in bringing Crab Day to the stage after recording them together.

The closing “What’s Not Mine”, arguably the album's highlight, is built around four chords as Le Bon mixes words that are almost baby-talk with others that describe a palpable sense of loss and absence. As it draws to a close all of them bar Mozgawa, who is busy pummelling the drums, start to dance in a blissful circle, lost in the songs’ circuitous rhythm.

The encores are all drawn from 2013s Mug Museum and starts with its wistful title-track. Beginning with just voice and piano it’s very moving, Black then adds a lovely clarinet accompaniment, incongruously stood on the speaker stacks as his solemn woodwind notes hush the audience, it’s a stunning study in solemnity.

As if to buck the mood and satiate the players’ desire for abandon “I Can’t Help You” is deliriously giddy and hearing Klinghoffer sing the line “Beat me like egg yolks” isn’t something that’s going to happen in his day job anytime soon, mores the pity. They close with “Are You With Me Now?” and even as part of a three guitar attack Le Bon’s often underestimated prowess with the instrument is incredible.

As they finish they doff their hats to the audience and look as happy as I’ve ever seen a group of musicians at the end of a performance. Perhaps they should ditch their day jobs, because tonight Cate Le Bon and Banana put in an early contender for gig of the year - to quote her recent single, this was “Wonderful, wonderful, wonderful”.