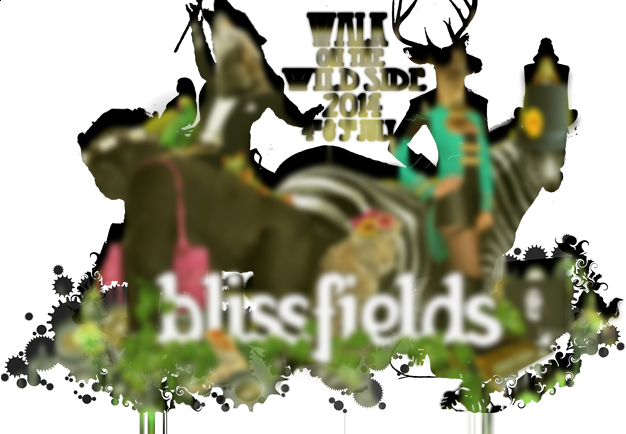 Blissfields comes but once a year and despite the rain we were assured was impossible and a few too many pitchers of Pimms, the eclectic line-up and electric atmosphere are enough to convince anyone of sane mind that this is one of the most exciting small festivals around.

​Arriving to bruised sounding guitars can mean only one thing: Wolf Alice are in full flow on the main stage and proving, once again, why they’ve earned a reputation as one of the most talked, hyped and blogged about band of the past 12 months. “Moaning Lisa Smile” provides a hedonistic highpoint as they rip through a set defined by gritty guitars and pummelling drums. The way they own the festival stage and draw in even distant observer suggests that this band can be every bit as exciting on a large stage as they are in dark, damp and cramped venues.​

Demonstrating beautifully the breadth of music on the line-up at Blissfields, the chaos is quickly followed by a subdued set from the enchanting Luke Sital Singh. Taking to the stage with just a guitar for company, the bespectacled songwriter puts in a dogged performance. This is not Singh at his hypnotic best, the distant crowd and patchy sound denying him the intimacy within which his music becomes so enthralling.

Between the acts, intrigue gets the better of the Best Fit crew and we meander off to explore the assortment of stalls and statues that dot the festival’s minuscule site. Thirty feet from the birds of prey tent (we’re not kidding, you can hold an owl if you like), there’s a lopsided shack playing drum ‘n’ bass. This contrast sums up the whole festival nicely, attempting to cater for those under-five as much as those under-the-influence has some odd results.​

Heading back to the main-stage at the sound of off-kilter beats and cawing vocals, it’s a privilege to see tUnE yArDs’ Merrill Garbus delivering a set much like a punch to the stomach; breath-taking and aggressive. It’s impossible to define, moving effortlessly from afro-beat vocal strains through hip hop influenced percussion by way of jazz and folk, all delivered with an effortless ease that belies the complexity of the songwriting on show here.

In another fitting contrast between consecutive acts, Dan Croll looks every bit the star as he dominates the stage and quickly whips up a clamourous crowd. Whilst his music also owes much to the afro-sound (following in the footsteps of Paul Simon, Dan spent time last year recording in South Africa with Ladysmith Black Mambazo), there’s a sense of craft in his songwriting producing perfectly refined pop with a twist. Whether it’s the echoing beats of “Wanna Know” or the organ stabs on single “From Nowhere”, there’s plenty to demonstrate the musicality that contrasts the simplicity of Croll’s lyrics and song structures. By the time they draw to a jubilant close the young audience are frothing at the mouth with shouts for more, drowning out Croll’s words of thanks.

Entering the ‘Hustle Den’ tent for the first time, we’re greeted by the euphoric guitar and clattering beats of London-based duo Thumpers. On record, the band’s left-field indie pop aesthetic comes from the messed-up minds of Marcus Pepperell and John Hansom Jr, but live the pair are joined by a crew of compatriots who give new life to songs that would suffer if not performed with the energy that they are gifted on record. It’s anthem after anthem. Never average, never boring; just unabashedly pop-centric indie and leaves the crowd quite literally steaming (in every sense of the word).

The come down is rapid though, as the mesmerising Johnny Flynn brings a moment of calm to an otherwise hectic first day. Performing alone with just a guitar, the dimly-lit tent and rapt audience gift Flynn exactly the intimacy that was lacking from Luke Sital-Singh’s set just hours before. The softly-spoken songwriter seems to be growing in confidence with every album release and songs from his latest, Country Mile, stand out amidst old classics as more developed, less rough around the edges but still as direct and emotional as ever. It’s a brief respite before the frivolity that is to come.

As the sun sets and the revellers reach new levels of intoxication, Sleigh Bells step confidently out onto the main stage to thrash their way through their headline set. It’s a simple enough concept: Thrashed guitars play at breakneck speed whilst singer Alexis Krauss struts around the stage her eyes roaming the crowd wildly. But it’s Snakehips who really cap off the evening when they slouch out on Hustle Den stage as the final guitar riffs are ringing out. The duos hip-hop infused beats over lazy funk-fuelled house works perfectly in the hazy evening heat and by the end of their set the crowd is swaying and arms are in the air.

Day two and despite their hangovers of varying degrees, those with any sense start the festivities off right by soaking up FAMY’s irreverent performance. With the jubilant chime of guitars backing singer Bruce Yates’ heart-wrenching vocals, the four-piece ease hangovers and win the crowd over with songs taken from their debut LP We Fam Econo due to drop in September. On the strength of the tracks showcased to a dozy crowd in the Saturday morning sun, we can only hope that the album versions of “Ava” and “Donkey”, recorded with Maida Vale resident Miti Adhikari (James Blake, Blur, Nirvana) capture the laconic beauty that they deliver live.

From the extroverted to the ethereal, Laurel is as intoxicating as the Pimms over on the Hustle Den - demonstrating why the songstress is quickly becoming one of most hotly-tipped artists of 2014. With her delicately wavering voice, ‘Shells’ stands out as a highlight amidst a set of delicious melancholy pop.

Bipolar Sunshine has been on the periphery of the mainstream for a while now but on the strength of his incendiary performance today in front of an ecstatic crowd, by all rights this is an act that should be at the centre of popular consciousness. Owning the stage with an impressive confidence and swagger, the soul-drenched ‘Deckchairs On The Moon’ stands apart with a spontaneous sing-a-long breaking out during the singer’s new single.

Raucous sing-a-long’s aren’t really an option for Cosmo Sheldrake fans. The introverted songwriter has an uncanny knack of writing songs that sounds simultaneously peculiar and familiar. Perfectly crafted melodies are built from the strangest found sounds, loop-upon-loop steadily building towards arrangements orchestral in scale. In the darkness of the Hustle Den, there’s an unnerving quiet as Cosmo tests the boundaries of the audiences expectations, throwing elements of improvisation into otherwise tightly controlled trickery. It’s hypnotising at its best, and as the Brighton-based producers only festivals of the summer (he tells me later that he’s going to spend two months on an island in Canada, collecting sounds to use in his tracks) the crowd are amongst the lucky few to see Sheldrake in such intimate and atmospheric surrounds.

From improvisation to tightly controlled precision, Flyte are an easy band to feel cynical about, their highly stylised videos and quiet confidence suggesting a band who know something that we don’t about the potential of their folk infused indie-pop. But in the Hustle Den today they are undeniably brilliant, huge harmonies and instantly recognisable choruses complimented by their sheer musicality. Their confidence seems justified as they leave the audience buoyed up and begging for more.

With the sun setting and a sense of despair that it’s all almost over setting-in, 2ManyDJs walk calmly out into the evening heat to a cacophony of whoops and yells. It feels as those the whole festival has turned up to see this one performance as people push and shove and the crowd swells to a size not seen so far throughout the weekend. They soon launch into classic reworks “Fuck The Pain Away” and “Smack My Bitch Up” and chaos descends.

For the few for whom this is not enough, there’s still plenty of time to slink off into the darkness to continue to party deep into the night. It’s a long, fond farewell to Blissfields for another year. Finally, a festival that lives up to its name: Bliss.