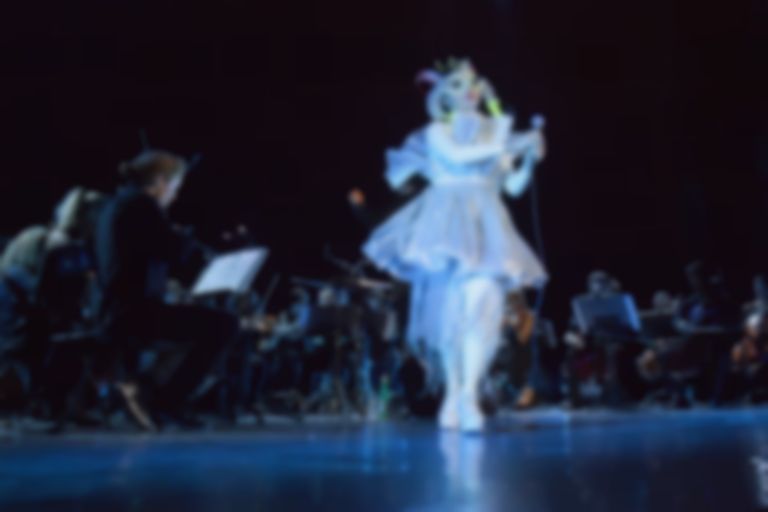 There probably isn't another artist alive today who could do this. It's likely there aren't even any who would bother.

I'm not entirely sure why Bjork's done it either to be honest, other than just a relentless passion for switching things up a bit. I'm happy she has. Or rather, stunned. Happiness is not an emotion befitting the evening. There's a palpable joy in the beauty of it all, but to be cheered by it isn't so much to miss the point as it is to indulge in full blown masochism.

This thing that she's done is to take her latest album, the beat-heavy Vulnicura, along with a few signature songs from days gone by and rearrange them for a full string section, the Aurora Orchestra, conducted at the Hammersmith Apollo tonight (24 September) by John Harte. Vulnicura, a record that details "every fuck" of her divorce from choreographer Matthew Barney after 13 years and one child together, is an album that wears not just its heart on its sleeve but the whole grotesque gambit of human offal as well. Reducing it to just its string parts at times makes it feel almost too stark, as if we're gazing upon something so fragile it might collapse if we make any sudden movements.

So people stand deadly still in deathly silence as the music plays, soaking up all the pain and beauty of Bjork's drastic but faithful reinterpretations of her own songs. But it's also a Saturday night and they're excited and they really, really love Bjork, so as soon as there's a moment of silence, people go nucking futs in appreciation. Thing is though, with these string versions, moments of silence are commonplace – and they don't necessarily signal the end of a tune. After falling for so many false endings, the crowd becomes wary, and initially doesn't greet the end of "Black Lake" with any applause at all. When they realise they're safe to holler and cheer, there is instead a ripple of gentle, self-mocking laughter.

It's the one moment of joviality in the evening, which is a peculiar thing to say about a performance from a woman dressed like a jellyfish who's off to Berghain. It's not that it's devoid of hits; the second half of the performance features not only a completely mesmermising rendition of "I've Seen It All", but a tour debut for "Bachelorette", "Joga" and a stunning "Pluto" to close, all just with strings and vocals. There's a lot to delight in, but you walk out of here neither with a smile on your face nor a frown, almost in a state of shock, like you've just seen a beautiful car crash. Stunning really is the only word.