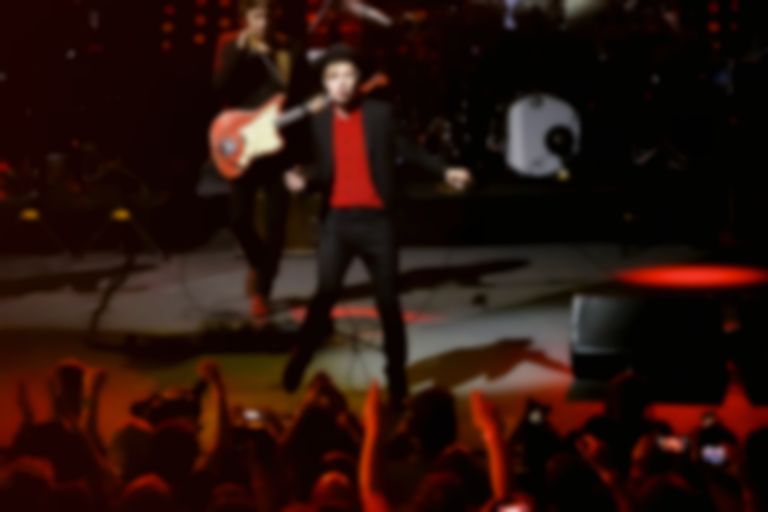 You could tell something wasn’t right. The tour around 2008’s Modern Guilt was one of the most dispiriting things I’ve ever seen a beloved artist deliver. Though the songs were there, their performer looked a mixture of disinterested and physically pained by them, forgetting lyrics, imbuing his creations with nothing in the way of pizzazz, and standing pretty much motionless throughout their sluggish duration. It wasn’t until last year that Beck explained he was suffering from severe spinal pain at the time, which makes me feel a little bad for damning the shows for not containing the saucy theatrics I’d come to expect from date night with Beck.

With my lesson learned, I arrive at The Roundhouse for the opening night of the iTunes Festival in the mindset of a man perfectly happy to hear a solo acoustic set largely drawn from this year’s splendid Morning Phase, with the odd bit of Sea Change as a treat, and nowt else. That’d suit me fine, Beck – I just hope you’re feeling better, dude. However, this isn’t what Beck’s got planned. He’s very much got the “Devil’s Haircut” on his mind.

In fact, he opens with it, and within a few bars of its famous three note riff he’s thrashing around the stage like one of those inflatable fellows with the wavy arms you get on the forecourts of used car dealerships. I’m not sure if he looks like he’s having fun exactly (it’s more… aggressive than that), but he certainly seems like he’s a few things to prove – namely that his back is just fine, thanks for asking, and that he’s the author of one of the strongest arsenals of rock songs of the last, ooh, let’s say 20 years. The opening section of this Odelay!-heavy set (hooray!) is packed like classic indie sardines; an evergreen “Loser”, still uniquely funky “New Pollution” and the heavy skronk of “Novacane” being particular highlights. Beck’s band – a group he last toured with in 1998, when he was some sort of Man God – are spectacular, recreating all the strange loops and samples on these sonic hodge podges of records with live instrumentation that’s commendable in both its punch and warmth.

When it does slow down, it does so only briefly, but wonderfully. Our introduction to Morning Phase – the record he’s meant to be promoting – is limited to just three songs tonight, so intent is Beck on jogging our memory about how excellent his older tunes are instead. Yet perhaps if this wasn’t a live streamed, iTunes-sponsored event, we’d have time to get to know the excellence of his contemporary material a little better. “Blue Moon” is one of the most sumptuously melancholy songs he’s ever written, “Wave” one of the darkest, and “Heart Is A Drum” among his most sweet and endearing lullabies. Tonight, the former and latter are both delivered with a wistful shimmer, while “Wave” is granted its own special, brooding menace. Though certainly heart-rending, the band play these songs with the biggest of smiles on their faces– perhaps music like this just suits men in their forties a little more than screaming “My time is a piece of wax falling on a termite choking on the splinters”? – and it’s testament to the power of the new tunes that similar grins can be seen around the room, despite most people likely not being overly familiar with quite how this music goes.

A lovely, lovely “Lost Cause” from Sea Change aside, that’s all the Quiet Beck we get. Finding himself finally at ease with an album he’d previously disregarded as frivolous, Party Beck leads us in to a rambunctious encore of Midnite Vultures’ “Sexx Laws” and the brilliant right-on Prince parody of “Debra”, with a spring in his step that’s been absent – live, anyway – for the best part of the last decade and a half. Whether he’ll get back to making similarly pumped up records or not, who knows - in truth, the stuff he’s coming out with at the minute has its own separate but equally laudable thrills. Party Beck or Quiet Beck, it’s just nice that Beck’s back putting his back in to it.