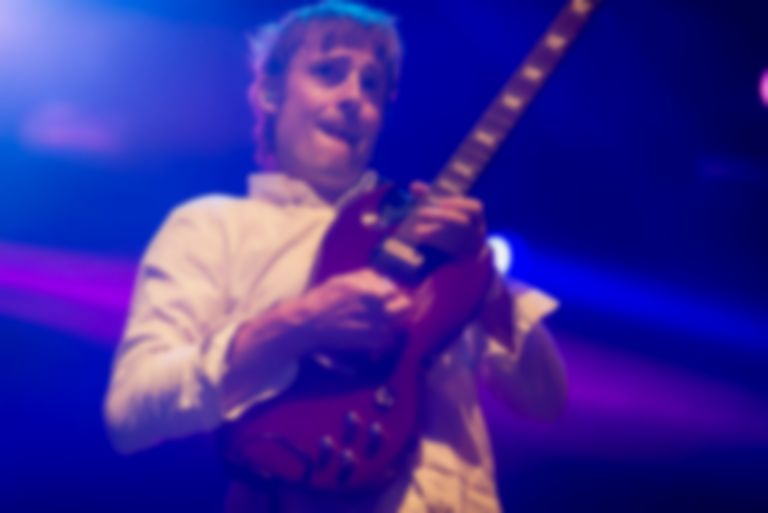 'What do you call a drummer with half a brain? Overqualified'. For decades, drummers have been the butt of their bandmates' cruel jokes. Relegated to the rear of the stage, and given a microphone only as a last possible resort, they're the whipping boys of popular music. Level one of these cliched wisecracks in the direction of Battles percussionist John Stanier however, and you're likely to get short change.

Stanier has long been rated as one of the finest drummers on the planet, and on the strength of tonight's performance at Brixton Electric (24 March) and his band's three albums to date, it's easy to see why. His riser pushed to the front of the stage — level with his two bandmates contrary to rock music convention — he assumes the role of conductor, marshalling proceedings with the deafening snake jaw snap of his snare drum. Behind a minimal kit featuring only one tom and a single cymbal suspended comically high above his head, Stanier sells every beat with the industrial intensity and precision of a soot-covered miner striking his pickaxe time after time into the exact same spot on a coal face.

As compelling as watching Stanier is however, Battles are a trio, and a ludicrously talented one at that. Their live show has become legendary and tracks like "Ice Cream" are lapped up by tonight's sold out audience. The departure of vocalist Tyondai Braxton a few years back hasn't diminished their presence; if anything they're even better now than during the era that spawned debut album Mirrored — Ian Williams' synthesiser burbles deliciously and bassist/guitarist Dave Konopka's chunky off-kilter riffs send the Brixton Electric audience into raptures.

This evening's set draws from across Battles' back catalogue, including tracks from their recently reissued debut EP which shimmer alongside more recent fare. Perhaps the highlight is early single "Atlas", its deranged Seven Dwarfs worker bee vocal sample driven by a precise military beat.

Battles' reputation as an outstanding live act is well deserved. Devastatingly tight and firing out discombobulating time signatures with abandon they're at the peak of their powers. Missing them on their next foray to these shores would be no laughing matter.