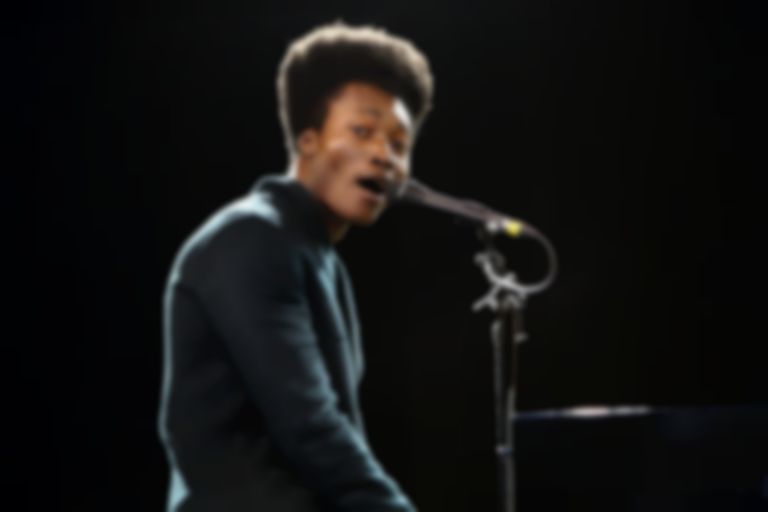 A mere few weeks ago, the chances of Benjamin Clementine scooping the Mercury for his debut album seemed minuscule. However, Clementine pulled it off, fans of Jamie xx and Slaves bleated on Twitter, and the North Londoner-turned-Parisian's existential crises and urban observations continued to gain ground.

Tonight's gig at St. John at Hackney (7th December) is both a homecoming and a victory lap, then, and - in step with his theatrical vocal style - Clementine takes to the stage barefoot and swathed in a long blue jacket. Alternately sitting and stooping behind the piano at the centre of the 18th century church, he eschews all traces of small talk. For all the Nina Simone comparisons he's garnered, you half expect him to launch into “Feeling Good”, but he's soon recreating his feted record, At Least For Now.

He begins with “Gone”, a song about a changing land where "the road I used to cross to school is now full of prositutes". It's one of several tracks which take inspiration from his own much-publicised story: now 27, he left for Paris aged 18 due to family problems, and slept rough before busking led to a record deal with Universal's Barclay imprint. Whilst living across the channel in 2013 I bore witness to his ascent, as glossy magazines and free newspapers alike thrust him into the spotlight.

Here in Hackney, his powerful yet fragile vocals fill up the cavernous space, piano alternating between tranquil and definite before being replace altogether by a spoken word outro. It's the first of many, and you get the sense that in lieu of swapping anecdotes or forcing chatter with the crowd this is how he prefers to communicate. Then it's onto “Condolence”, where drummer Alexis Bossard springs into action, providing a defiant, R&B-style percussion for Clementine to weave his lyrics around. His music often drifts towards art rather than mere entertainment, especially when he gets back into not-quite-singing mode to deliver deep, if slightly tautological lines like "where I'm from we see the rain before the rain even starts to rain" with RSC-worthy enunciation.

Before he can launch into a third song, an unusually polite heckler is wishing him a Happy Birthday, and before long the packed 1400-capacity venue is serenading him. As I join in, I wonder whether Clementine - part raconteur, part mute - enjoys the attention. He thanks the crowd a little awkwardly, adding that "I've never had that happen to me before" in a way that makes him seem both touched and a little dazed.

The rest of the set is near-identical to the record, only a little more austere and spacious given the acoustics. “Adios”- with its unpredictable, Simone-ish jauntiness - is given a bit more welly than usual, as cellist Barbara Le Liepvre takes centre stage alongside Clementine. The equally off-kilter “Nemesis” bags him a standing, noisy ovation from the upper tier, with its command to "treat others the way you want to be treated" seemingly another callback to his own trajectory. He appears breathless during “Cornerstone”, with its umpteen calls of “home” in the chorus, placing an extra emphasis on the line "this is the place I belong" as he faces London once again. He continues the theme of reconnecting with his old stamping ground on “Edmonton” - not an album track but rather from his 2014 EP Glorious You. Relishing in every repeated appeal to the borough where he was raised, a place where a "lad stands a slim chance, even if they knew they'd made all the right choices". He also implicates some bloke called Boris in the chaos.

The first encore track - a cover of Nick Drake's “River Ma”n - is a little by the numbers, but Clementine and co take control of his audience once again with the gothic, operatic denouement of “Then I Heard A Bachelor's Cry”. On my way out of the church, I come face to face with a homeless man, one of many rough sleepers who have congregated around the venue over the course of the evening. He tells me how much he hates begging, and I think about what the "right choices" mean in this incredible yet difficult city, and Clementine himself, using his piano and pathos to make sense of it. It looks as though he was the best bet after all.