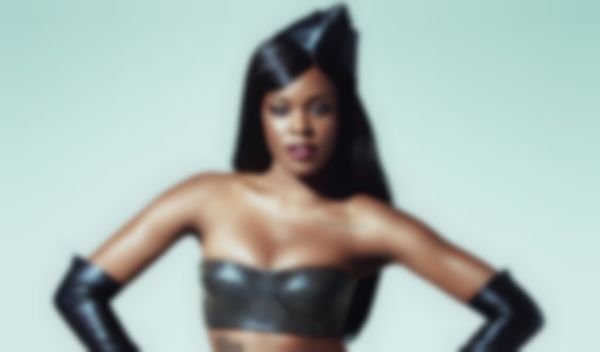 The warm-up to Azealia Banks’ sold out show at Shepherd’s Bush Empire is a heady mix of high speed catchy song DJing and clueless posh girls Shazaaming Goldie Lookin Chain samples. There are more people than should be possible squeezed into Shepherd’s Bush Empire and those that don’t look like they got there via a catwalk want to be models when they grow up or have familiar looking face that means they might be a b-list celebrity or something. There’s a fair amount of Azealia Banks styling too. Nick Grimshaw and a harem of gobby northern girls are being vigorously frisked by the first floor bouncers as late arrivals scurry around looking for any sign of an empty seat.

There are none. Because it’s one of those gigs where everyone within grasping distance of a ticket has not only shown up but is also massively excited about being there. And DJ Cozmo – who turns out to be Azealia’s regular touring partner – fires out warning signals of danceable pop to pep up the crowd even more, ahead of her arrival on stage. He’s reassuringly predictable in his selection of high-speed mash-ups which feature the likes of Deee-Lite and the Jackson 5. There’s a slightly awkward moment when he plays an authentic disco track and almost brings the bouncing throng to a confused standstill, but the almost non-stop 90s mixtape is back on the tape deck before he notices.

And so to Azealia, the pocket rocket potty mouth from Harlem who swaggers onto the stage in beetle crusher boots, high waisted denim hot pants and a silver crop-top wired up with flashing lights. Her intro music is The Prodigy’s ‘Out of Space’, a song she covers on her Fantasea mixtape, which given her reception seems pretty apt. The 21-year-old superstar launches into her trademark tirade of potshots at other female rappers. And for an artist whose music relies almost entirely on her voice and presence, the pressure is on for Banks to deliver.

She does – and is punchy word perfect. The raw passion of her chanting, consonant spitting, x-rated performance is something to see. And while ‘parental advisory explicit content’ is an understatement for Azealia Banks’ music, her butter-wouldn’t-melt smile, the fact that she is – Rapunzel length hair extensions aside – tiny, and her all consuming confidence make her endearing and of course, effortlessly cool. The music industry could groom Jessie J for the next ten years and she wouldn’t be have a fraction of Azealia Banks stage presence. Which is why Azealia and her trademark ’212′ are 2012.

That and the fact that she is real. Raised in a tough area of town with plenty of attitude and there’s no room for niceties in her music. In fact there’s no room for anything that doesn’t fall within the category of vulgar slang, but don’t let that put you off. This is 2012 poetry about the ’212′ – that’s New York’s Manhattan Island dialing code, in case you didn’t know. And chances are if Azealia’s hit song is your first brush with that rhythmical number than you’re more likely to think the 212 is a stripclub. The lyrics are designed to shock – that’s her bag. That’s how she rolls. And let’s be honest, she does it well.

That’s why the 2,000 strong crowd shout almost every lyric to every song back at her. Even Azealia seems surprised at how well-versed they are during some of her older material. ‘Fierce’ from Fantasea and ‘Bambi’ both get a balcony breaking movement of delight from her fans, who just can’t get enough. ‘Jumanji’ gets a raucaus sing-along to it’s “real bitch, all day / Uptown, Broadway” chorus. It’s short, sharp, punchy and packed with swear words and x-rated descriptions of things that most people probably only know are possible as a result of listening to Azealia Banks’ music. Quite a claim to fame, that. For an artist yet to release an album, the only hint of a fault about tonight’s performance is that there is the sense that material is as thin on the ground as free floor space. She leans on her dancers and DJ to plug a few gaps between her characteristically short songs as she stretches herself ever-so-slightly to fill just 45 minutes.

She’s backed by two purposefully androgynous stage school-esque dancers who sport the Brooklyn standard chic denim cut offs, string vest and lumberjack shirt wrapped around the waste; their job partly being to fill the stage while Banks pauses for costume changes. After her first disappearance she emerges in a purple cut off tshirt with silk black hotpants and the rap star footwear of choice, Timberland boots. Which are presumably easier to dance in than the terminator ones she started out in.

When she introduces the “favourite song I’ve written in my entire career”, it turns out to be 1991. As for her “anthem” it’s ‘Liquorice’, a contender with ’212′ for the highest number of NSFW lyrics in a three minute recording. And finally, predictably saved until the end, is “why y’all know Azealia Banks”. The climax to the evening, in every sense, as the singer launches into her undoubted show stopper, ’212′. It’s suitably special and there’s not a person who isn’t singing, shouting, jumping or pointing at Azealia Banks for three-and-a-half minutes as she discusses the finer points of seducing her boy friends’ girlfriends (well, that’s the clean description, anyway). Just listen to Azealia, she’ll tell you how she does it.

Being one of 2,000 people shouting “I’mma ruin you c-nt” while pointing and smiling and enjoying every bit of it, is pretty unforgettable. That the whole experience is over in 45 minutes would feel like short change were it almost any other artist. Yet in this case it’s perfect. The intensity and energy packed into those precious minutes are designed for short, sharp bursts. Azealia has nailed it.