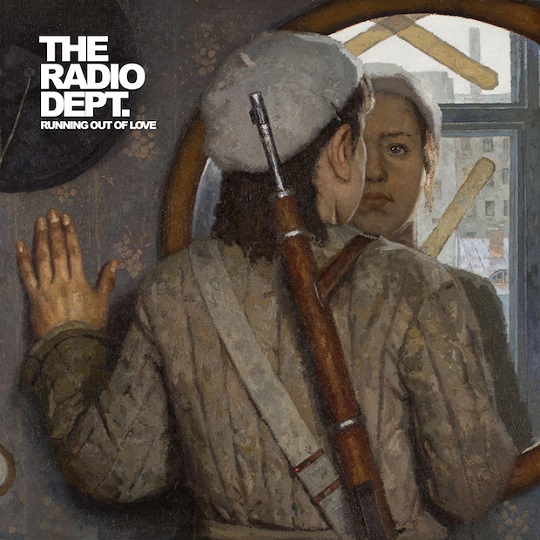 You only have to look at the cover of Running Out Of Love to realise that The Radio Dept. are waging war. Over its ten songs Johan Duncanson and Martin Carlberg do battle with the Swedish government, fascists, racists and their (now ex) record company.

In periods of political unrest artists of a certain calibre are driven by the need to stand up and be counted. One of the most compelling examples of this happened when Billie Holiday put her career on the line to record the song “Strange Fruit”, about the barbaric racism that was still prevalent in the USA in the early 20th Century. In the 21st Century the political waters are equally troubled and political music is as important as ever.

The Radio Dept. have never shied away from the political - their 2008 song “Freddie And The Trojan Horse” was a rejoinder at the then Swedish Prime Minister - but their fourth album is their most involved political statement yet, every song takes aim at what they see as an injustice. What lifts it above the realm of polemic is the lyrics’ marriage with dance music; the arrangements bristle with an irresistibly kinetic energy.

Its recording was clouded with acrimony; they ended up in court with Labrador, their label of nearly twenty years and lost. This is the last record they’ll release on the label, but the relationship always seemed fraught. The song “Occupied” deals with the court case and whilst the words are largely hidden in reverb, one can discern pointed barbs, “We all wish there was a hell for some people, some kind of retribution… but as you know that’s not the way it goes, when was it ever?”

Their song “Heaven’s On Fire” from 2010s Clinging to a Scheme had a sample of Thurston Moore saying “I think we should destroy the bogus capitalist process that is destroying youth culture.” The full quote ended with the sentence. “The first step to do is destroy the record companies”, which is a sentence one can imagine The Radio Dept. uttering on hearing “Occupied”.

However the wider narrative of the record focusses on their home country. The opening three songs lacerate Sweden’s political landscape. The title of “Sloboda Narodu" translates as “Freedom to the people” and its origin was as part of the motto of The Yugoslavian partisan movement of World War II, where it was prefaced by the words “Death to Fascism”, the title of their track from 2014. “Swedish Guns” is just as direct, with Duncanson half-speaking the words “Who can be to blame for Swedish guns? A clue, it's in the name, a diabolic shame.”

Completing the triptych is “We Got Game”, which describes politicians and fascists a “bunch of racist loons”. The line “We came to speak our minds… what else could we do?” sums up their need to engage with the political. Musically it shows their love of Detroit techno of the 80s, they namecheck Paris Grey, singer with Inner City and borrow the riff and a lyric from their track “Good Life”.

Having initially been hailed as dream-popsters with their debut, 2003s Lesser Matters, over the course of their subsequent records, 2006s Pet Grief and Clinging to a Scheme they’ve gradually added more electronica to their songs and that reaches its apex on Running Out Of Love. There are still traces of their glorious guitars, but noticeably much less of them. Yet, as they said the last time they spoke to Best Fit “Even if we want to do a hip-hop track, it turns out as The Radio Dept.’s sound in the end.”

They also display an unabashed love of 80s Manchester music, with the spirit of New Order and The Stone Roses part of the musical dynamic. The record's highlight and heartbeat, “Committed to the Cause” is a song that struts the way The Stone Roses comeback song should have done, rather than the dogs’ dinner that was “All For One”. It’s the sound of insurrectionary menace, marrying the lissom funk of the bass and drums - which could be Reni and Mani at their prime - with deceptively intricate melodies. It uses space and pauses as effectively as it does a thrillingly frenetic Italian House piano.

The title track starts off with bleeps that sound like Morse Code, as if they’re covertly trying to reach other kindred, rebellious spirits. The fact that it’s an instrumental implies they’ve run out of words to describe their abhorrence of the state of their nation and express it musically instead. Its melancholic cadence evokes a similar feeling of loss that New Order brought to their instrumental “Elegia” from their masterpiece, 1985's Low Life.

The last line of our review of Clinging to a Scheme said “It’s been a long four years but, if it takes them as long to write a follow up as accomplished at this, it’ll certainly be worth the wait.” In fact it’s taken six years, but is Running Out Of Love worth the wait? You bet it is. They address politics in a way that only the bravest artists do. It’s a raging against the dying of the light and is incredibly focused, not a single note is wasted. Their anger isn’t expressed through expending their energy throwing wild haymakers, but with the precision of a wily boxer who knows when to swing the uppercut at the right moment, just as Holiday did with “Strange Fruit”.

Running Out Of Love isn’t the sound of hectoring; it’s The Radio Dept. getting on with the business of making important records, being one of the most challenging, uncompromising and rewarding bands we have and proving that political music is as vital as ever.