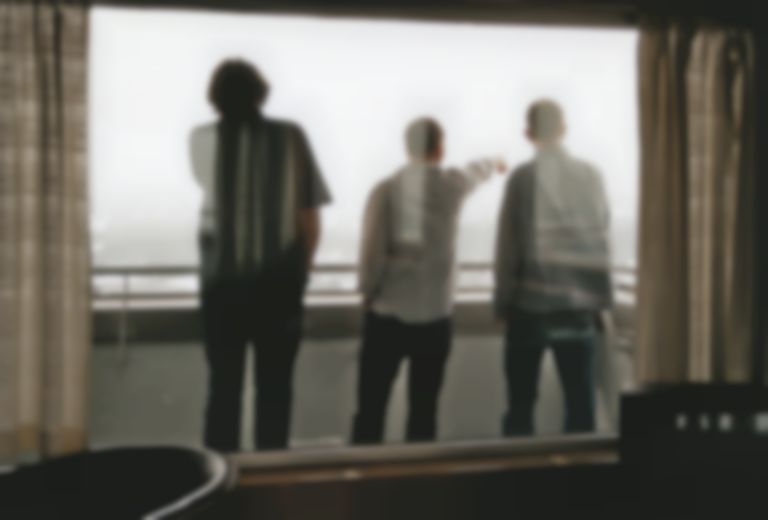 It’s been four long years since Pet Grief was released, and now we have Clinging To A Scheme, finally.

The release date must have been pushed back at least four times and we’ve been waiting impatiently for new tracks from this most sublime of dreampop bands. Why did it take so long? What were their influences and ideas behind the latest album? I caught up with The Radio Dept. just before their sold-out London show to find out the answers to these very questions.

Have you felt the anticipation around Clinging For A Scheme, and how do you feel about the reactions to the album?

Johan Duncanson (vocals/guitar): Well I think we felt some pressure and we felt the anticipation, but not enough to release an album that we weren’t happy with. We had to take that time. Basically, Martin and I and sometimes Daniel, we meet up for a week or two for some intense recording, everyday, and sometimes we don’t see each other for a couple of weeks and during those weeks we sometimes work with the music, apart. And sometimes it’s just been waiting. We live in different cities in Sweden, so it’s been hard to make things work. A long wait sometimes, just weeks of waiting. It’s one of the reasons it takes so long.

The reaction has been mostly great, way beyond our expectations. It’s been worth the wait for us as well.

Why did you decide to call the album Clinging To A Scheme?
Because we like people to think we’re up to no good! Not danger, but that we’re scheming, working on intrigue or a maneuver of some kind to overthrow the government.

How did you come up with the ideas and sound on the new record?
There have been so many ideas and too many inspirations. During the three years of recording we’ve been going through different phases and ideas of what we wanted the album to be like. We wanted it to be more beats-based, we’ve been listening to a lot of late 80s early 90s hip hop and a lot of anti-Thatcher pop from the 80s.

Clinging To A Scheme was supposed to sound more “rehearsing space-ish”. It’s not that we polished it to sound like rubbish, or intentionally kept it rough. We just wanted to keep that feeling. We have maybe 100 songs recorded for this album, and Pet Grief as well. Sometimes we just record for 24 hours and it’s finished. That’s always when it comes out the best I think. Then you start to analyse and reflect, and then you try and bend or squeeze it into something new.

I read somewhere that you’d almost finished Pet Grief when you decided to scrap it and begin a new version because it was “too electronic”. How did you know when Clinging To A Scheme was finished?
You never know. We actually struggle until the last minute with things. We literally recorded some things on ‘Heaven’s on Fire’ just before the album was finished! It’s not like there was a plan or a deadline or anything, we kept recording songs until we had 10-12 songs we were happy with that worked as a whole.

Can we talk a bit about ‘themes’ – is there an overall Radio Dept ‘theme’ or feeling that you can describe in all of your music?
It’s not a theme that we chose exactly, it’s just the way things turn out. Even if we want to do a hip-hop track, it turns out as The Radio Dept’s sound in the end.

We like EPs – it’s easier to finish than albums, because it’s easier to have a concept or a theme that goes throughout the record without it becoming boring. We like short records, singles, EPs, short albums, short shows. Short is a key word.

Freddie & The Trojan Horse has an overtly political message directed at Fredrik Reinfeldt, the Swedish Prime Minister and leader of the Moderate Party. What’s the meaning of the line “he waved a banner at our latest show”? How have the scenarios you envisioned in the song got better/worse as he’s been Prime Minister in Sweden?
It was a kind of fantasy about him showing up at one of our shows and not being critical at all but instead just embracing us, loving us, and how we would react to that.

Your cover art fits the music in an abstract way. How do you comes up with the covers – do you know right away when you see what you want?
Sometimes I’ve been going through my parents old photos and I’ve found something – like the Pet Grief cover, for instance. My dad’s from Scotland, during a vacation in 1984 when I was 5, he took that photo in a park in Galashiels. the men in kilts they’re friends of his and the children are their kids.

It’s not always old photos, the Clinging To A Scheme, well that’s an old one – it’s from a documentary about the Vietnam War. I like it because it’s a really dreamy picture. do you remember the David EP cover? – two people wrestling, very gay. I see the Clinging cover as a full-circling, sequel maybe, to the David cover because it has quite extreme homoerotic undertones.

Since Pet Grief was released, you’ve also travelled to some far-flung locations for shows such as Peru and Manila. Can you tell us about some notable experiences from these shows? What did you think was the best/worst?
Best experience is the Asian touring we’ve done. The food is incredible and the people are very friendly and helpful and happy to talk to you. We are surprised that we have fans in such faraway places!

How do you feel about playing live? Is it something you consider to be scary, or do you embrace its possibilities?
We never get used to it. We’ve been doing live shows for almost 8 years now, and each time it’s hard. If you’re touring for weeks, playing each and every day, you get used to it after a while and the nervousness disappears. But if it’s a few weeks apart, or even a few days, it’s like starting all over again everytime.

Sometimes if it’s a good venue – we played our home town a couple of days ago, that was a great show for us. I don’t have a very strong voice so many venues I can’t really hear myself and the vocals are really out of tune. Last week Malmo was really good. People who came along saw us that we’d developed and become quite a good live band. But just the night before it sucked, so there’s always up and down, we don’t have a routine, so it’s hard.

Have you met many of your fans?
We’ve met a few. I usually stay in the dressing room after the show. Sometimes we go out and talk to people. In Asia it’s crazy. They treat you like you’re The Beatles or something. It’s not the same in Europe which is nice in a way as well. Both kinds of fans have their advantages.

In the last few years Swedish music has risen to prominence. Do you think there is such a think as a “Swedish scene” or a “Swedish sound”, and if yes, do you feel part of it?
There’s a lot of bands in Sweden, a lot of music, and I guess you call that a Swedish scene. And within that big scene, there’s many smaller Swedish scenes. Sometimes we’ve felt part of a Swedish scene, but not THE Swedish scene. I guess there’s a scene around Sincerely Yours and Service; The Embassy and Tough Alliance before they went on their own…but it’s not one we feel part of.

What’s been your favourite music of 2010 so far and why?
I really like the new mixtape by Theolonius London. It came out 3 weeks ago…we’ve been listening to some of the new American indie bands, like Washed Out. I’m not completely into it, the hype can kind of make it less inviting…good for him, but I don’t like the aesthetic of him, he’s a bit show-off. If you look at the photos of him, he’s posing.

Do you have a favourite Swedish band?
The Embassy.