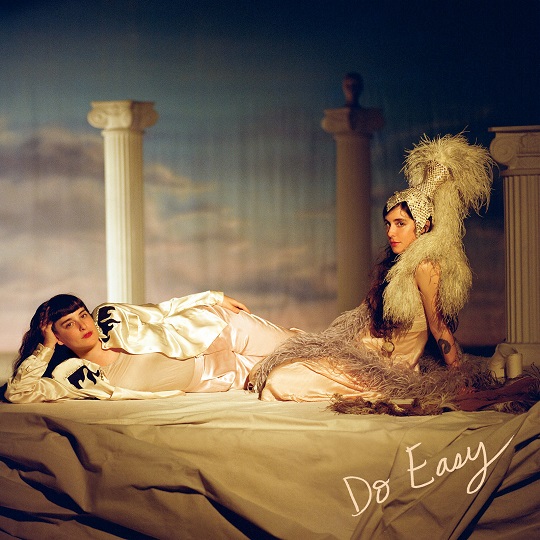 Sisters Sari and Romy Lightman, with Johnny Spence and Evan Cartwright in the fold since last year’s Palm Wine Revisited, are on something of a creative roll. Their debut album was 2011s Ulalume, with Tasseomancy delayed through their commitments playing in Austra.

The title draws inspiration from the writer William Burroughs discipline of DE (Do Easy) which he described as “doing whatever you do in the easiest most relaxed way you can manage, which is also the quickest and most efficient way.” Accordingly, Do Easy’s songs are elegant and ornate, without sounding cluttered. Such is the gracefulness of the writing and arrangements it beckons and then submerges you into a world far removed from the mundane.

The opening song has the confidence to namecheck two other artists - it’s called “Dead Can Dance & Neil Young” – without fretting over comparisons. Starting with a repeated single piano note, it recalls the gun-slinging, nonchalant grandeur of Lee Hazlewood’s songwriting, as their voices drift in and out of the ether, with the foreboding crescendo of “There’s something in the way, baby something’s in the way.”

The Lightman’s voices evoke the otherness of the likes of Elizabeth Fraser, Kate Bush and the Trio Bulgarka, who sang on Bush’s The Sensual World. Indeed “Missoula” is almost a sedate take on “Babooshka”, with its spoken vocals and lines like “I’m gonna find her and bring her back.” There are moments where it’s almost 80s pure-pop too, on “Jimi Infiniti” and “Wiolyn”. The chorus of the latter is lovely, the descending vocal harmonies simultaneously blissful and melancholy and the words and melody of “Run away, run away…” echo Bronski Beat’s “Smalltown Boy”.

The title track is something else, built on an ecstatic chorus it segues into another song altogether for the middle eighth before the chorus returns and drifts away into the sea, as the sound of waves crashing across a beach fades in.

The album closes with the mesmeric “Eli” where their voices, accompanied by a slow piano refrain, sound like they're speaking an incantation on the line “Because we’re thinking of never coming back.” It’s a suitably dramatic ending for a wonderfully theatrical record.

Do Easy invites you into its own rarefied world, a world where things are exotic, tranquil and seductively unique and makes you want to stay there.