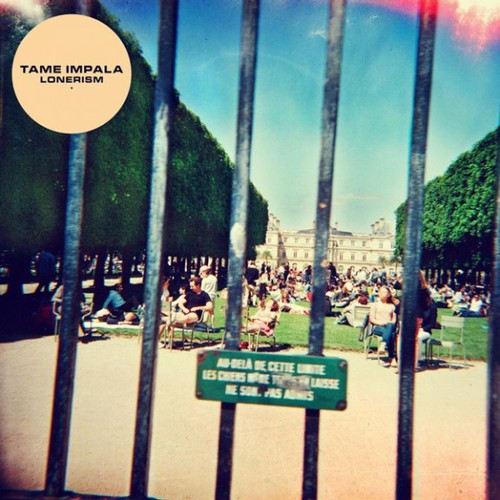 Tame Impala’s second album Lonerism is a real sonic feast. With clear ’60s/’70s psychedelic and blues rock influences, the 3-piece from Perth, Western Australia, fronted by multi-instrumentalist Kevin Parker, somehow always manage to lend their music a contemporary feel. The ears are continually wowed on their latest, with an array of songs and sound production to surpass their impressive 2010 debut Innerspeaker.

Typically, they balance an understated sense of melody with an ever-present groove, and their production juggles experimentation with the need to keep a clear overall direction in the sound, but while songs like ‘This Is Not Meant To Be’ and ‘Lucidity’ on their debut were homages to Clapton or Hendrix, respectively, this time there’s more of a soft rock Todd Rundgren influence, and The Beatles, too, with Parker’s voice eerily similar to John Lennon on songs like, ‘Mind Mischief’ and ‘Feels Like We Only Go Backwards’. Yet they still don’t sound particularly retro. A nice trick if you can pull it off …

Although they seemed to come out of nowhere when Innerspeaker dropped in 2010, in reality Parker and his friends (Dominic Simper on bass and keyboards, Jay Watson on drums) had been making music since their school days a decade earlier, and knocking around a burgeoning music scene in their native Perth, a place Bill Bryson once famously described as “the remotest city in the world”. It’s that sense of remoteness and space which infuses a lot of the band’s sound, and the loner spirit, which Parker refers to a lot in their music. Around 2008, he sent twenty tracks to Aussie label Modular Records who liked Tame Impala’s MySpace page, and although this sparked a bidding war between various labels, they stuck with the one that had shown the initial interest. The album was eventually engineered by Tim Holmes (Death In Vegas) in the band’s home town, before being finally mixed by Dave Fridmann, in New York.

The critical acclaim and commercial success generated by the band’s debut has given Parker a little bit more time and and space for the follow-up. He admits in pre-release interviews to being tempted to over-indulge the production, but a lot of the excesses turned out to be unusable, so Lonerism has actually turned out sounding fresher than anyone could have hoped. Fridmann has been tweaking the controls once more, so there’s more than a hint of what he achieved with MGMT on both their Oracular Spectacular and Congratulations albums (the bands also have spent a lot of time together touring), with a greater emphasis on keyboard sounds this time, along with all the guitar effects. The result is still like having a giant airship floating around inside your brain for 50 minutes, but on Lonerism, Tame Impala have switched to colourvision.

It’s an unusual beginning, but track 1 really leaps out at the listener. The opening words on ‘(Gotta) Be Above It’ are repeated again and again until they actually sound like “Gotta be a bullet”. This mantra is set to a trippy-sounding Lennon-like vocal, and driven by a powerful battering-ram beat the song becomes a visceral thrill, something like the morning adrenline rush, but also the sound of somebody struggling with themselves, trying to rise above everything and prevail. This brave loner spirit is re-visited later with ‘Why Won’t They Talk To Me?’ a great pop song but one that visits some desperate feelings of isolation. The same anxieties resurface later on ‘Nothing That Has Happened So Far Has Been Anything We Could Control’, although this time the protagonist is rescued by some reassuring words from a (girl) friend.

So there’s a Lonerism sub-plot being played out here, but ‘Above It All’ is principally part of an impressive opening sequence in which the band move up and down the musical gears. ‘Endors Toi’ is ‘Lucy In The Sky With Diamonds‘ keyboards and guitars bleeding into a poppy Lennon-style vocal and growling Hofner bass sound, before the song is sent totally stratospheric with one of those Hendrix fuzzy riffs that sounds like the sonic equivalent of marshmallow. ‘Apocalypse Dreams’ follows hot on its heels, this time driven by a steady 4-4 beat and ‘Ob-la-di, Ob-la-da’ piano accompaniment to Parker’s falsetto. The song ebbs and flows with some nice quiet bits of guitar in the middle, before it returns to epic ‘Day In The Life’ proportions to play out. This all happens in the space of about 12 minutes: the bar is set very high for the rest of album, as I check to see if my feet are still on the ground…

The band have clearly stepped up the intensity on this recording and had a lot of fun in the process. Wisely, the noodling’s been kept to sensible proportions, so most of the songs are trimmed to 4-5 minutes. ‘Keep On Lying’ starts off casually before metamorphosing into spacerock, finishing with waves and waves of guitar fuzz. ’Music To Walk Home By’ sounds like Rundgren in one of his earlier ’70s progressive rock incarnations: The Nazz or Utopia. It’s driven more by keyboards than anything hard rock, although is undoubtedly more riff-heavy by the time it reaches its fade. Featured song ‘Elephant’ needs few introductions, stomping, grooving and dancing like an elephant surely would (in cartoons, at least). It sounds self-assured and familiar, but somehow out of place, the band leaving most of the tributes to Sabbath at the door this time.

So sonic exploration is the name of the game on this album, making it a real treat with headphones. As if to highlight this, ‘Sun’s Coming Up’ is the album’s fond farewell, with a last Lennon ‘Love’ homage and some final gasps of guitar phasing to summon the morning sun before being swallowed up by the sound of waves breaking in the distance. The album’s only weakness? Sometimes you just have to go to bed.