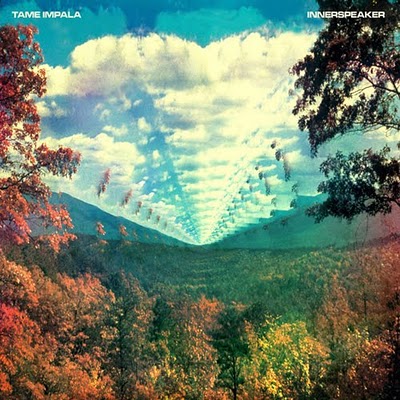 For those who’ve been reading music outlets for the past couple of years, it’s not been difficult to spot certain trends arising in what gets cover. The rise and fall of certain bands, for example, or the hype and hate cycle that precludes the burgeoning of any genre’s prevalence are common features. But whilst trends overarch, there’s one myth that keeps permeating, recycled every few months by all manner of sources – that with the oncoming digital, download driven business model that has quickly come to dominate the industry, the album as a concept is dead.

Regardless of the many statistics that show such a claim to be false, it’s saddening to imagine a future where a procession of three minute singles are all a band are considered fit for, especially when the medium is such an ill-fit for many acts. With Innerspeaker, Tame Impala mount their own defence of the humble long player. Taken apart and dissected, each of it’s 11 tracks are a good, if somewhat dated listen – the reference points to 60’s rock and psychedelia are there in bucketloads, an overbearing elephant in the room. But when taken as a whole, it represents something different altogether.

There’s a lot packed in to this near-hour long journey. There are long periods of almost dream-like, meandering instrumental work, but equally there’s a lot of soaring vocals and angular guitar work, with all the grey area in between invariably invoked at some point. Flying against the larger trend, a ‘more is more’ approach seems to have been taken, and it’s an album that feels big – at times, maddeningly so. There are many ideas on show here, but the insistence on showing all of them all of the time can feel like overload.

Over the course, however, there is a grander narrative that seems to develop, and the seemingly forced depth offers a lot more than it first seems. The bombastic style and sometimes overblown effects are underpinned by a much more subtle, knowing approach. Though some of the guitar solos come off as a less exciting take on Wooden Shjips with a lot of added polish, there are large portions of this that, with a bit more fuzz and a lot more urgency, but mistaken for the twisting tapestry that earned Deerhunter such a reputation. Perhaps if Bradford Cox had been given a draft to make Cryptograms more accessible to the readers of Classic Rock, somewhere close to this would be the result.

This is an album that will invariably win you over, probably due to as much as in spite of there being no real standout tracks. ’Desired be, Desire Go’ makes an early stab for the obvious single, but at well over four minutes long ponders for too long without ever really going in for the kill, and the same could be said for the funky grooves of ‘Lucidity’ and, indeed, many of the other songs. The lack of any “proper” hit material means that Innerspeaker has to be judged as body of work – and though track by track, the flaws may be maybe, as a whole it’s an undeniably excellent listen. Australia has hardly had the best track record of making well respected bands that sell records, but Tame Impala have managed to craft something that will simply engulf you – as long as it’s given half a chance. And if you don’t like it, then your Dad probably will.