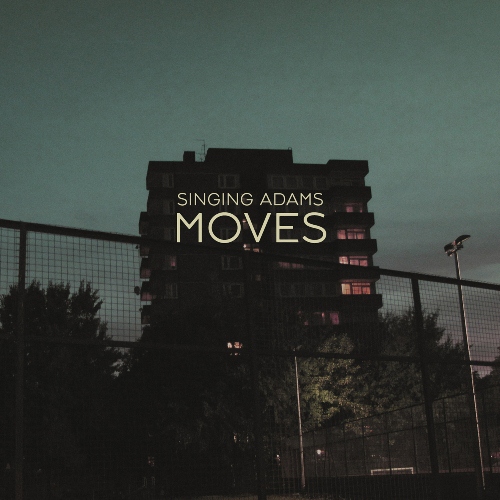 Last year around this time, Singing Adams settled back in the studio after an autumn tour throughout the UK. After the band’s first release, Everybody Friends Now, Steven Adams and company took the winter to construct a proper follow-up, Moves, and chose a corresponding release date of 10 December.

While the bookends of the album are anchored in the winter season, those dates belie the album’s warmth that stretches to include summery jangles like ‘Building A Wall’ and ‘Good Luck’. That either makes it a fish out of water or the ideal wintry listen depending upon your inclination. Suffice to say, this is not your typical seasonal release.

What Moves is, however, is an irresistible release that offers up gratifying choruses that are both notably concise and catchy. Clocking in at just over 30 minutes, the 10 songs here linger long enough to please before passing along the microphone to the next in line. The resulting instinct is to spin the album all over again as soon as it ends.

The straightforward drive of ‘Dead End’ is the album’s lead single and rightfully so. It’s the centerpiece in the middle that illustrates how dazzling such sonic simplicity can be. The light harmonies, the jangly tones, the escalating distortion and punkish repetition all work together for one of 2012’s best tracks.

The aforementioned ‘Good Luck’ and ‘Building a Wall’ cement the album as a direct, unvarnished rock release and the quartet feels right at home here. The guitar work and handclaps on ‘Good Luck’ make it an ideal second single, should the band choose. The latter overstays its welcome for about minute, but it’s a fine track all the same.

The level of variance on Moves is impressive given the brevity of the release, which shows that the best is yet to come from this quartet. ‘London Trocadero’ rides a slinking, up-front bass before breaking out into the finest single minute of the entire album. The pensive piano that closes the album hearkens to a missing element that could, perhaps, appear on a future recording. It’s not out of place here. Instead it’s a preview of something more – a reminder of another dimension not yet displayed.