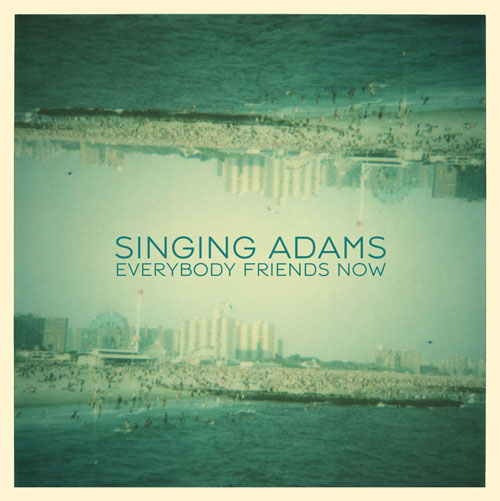 It’s a tough life being an alt-country tinged indie folk band (Acti-folk, genre fans). There are acoustic singer songwriters up and down the county after your crown on one hand, and indie bands deciding to go mellow on the other. All the while glamorous Americana from Brooklyn lofts runs up to you and steals your beer money. It’s also a slippery tight rope to walk, constantly in danger of tipping in to Paul Gambaccini Radio 2 territory, when you should be hanging out with Jeff Magnum at ATP.

This is where The Broken Family Band found themselves: Not hipster enough for the Bright Eyes or Low Anthem fans, yet neither sanitised and accessible for a Noah and The Whale hungry mainstream. Having the right friends, like Neutral Milk Hotel, and being a modern Anti-Folk influence meant they had the kudos and the cult following, perfect to name drop, but were never going to be more than a mid-afternoon festival slot at Green Man.

It seems Steven Adams knew this. In 2006 he released his debut Singing Adams album Problems, a record which sounded like a reaction to the confines of a band. He also became the BBC’s unofficial songwriter with commissions for Radio 4’s Today programme. So when The Broken Family Band disbanded in 2009 it was only a matter of time before Adams’ prolific song writing would return, and thankfully it has with Everybody Friends Now.

With opening track ‘Move on’ one is taken aback with how poppy and jolly it sounds, there are horns, hand claps and backing chants dotted troughout. Adams sings, “There was something I was trying to prove, but I didn’t know how / There was something I was trying to say, but I don’t know now / If It didn’t happen then, it never will, move on.”  It’s a direct proclamation of the underachievement of The Broken Family Band, and drawing a line under that career with a fanfare to the future. The joviality is replaced with the down tempo stomp of ‘I Need Your Mind’ where a serious intent is outlined: Adams has observed our previous behaviour and delivers a scatter gun synopsis, while the snare and bass build up to cymbal crashing chorus. It’s here Adams delivers his manifesto of the arriving future and needs us to come along. These two openers have been a form of self-therapy, a double pronged statement of where Adams wants to be, the past has been exorcised and the futures outlined. Let’s start the journey.

Unfortunately, ‘Bird on a Wing’ sounds like early noughties indie types, Lowgold, writing a drab Neil Young parody for a B-side, it’s as if Adams spent too long on the therapists coach and is struggling to get up. Paul Gambaccini is rubbing his hands with glee. Drudgery is quickly and perfectly redeemed with ‘The Old Days’ which is soaked in Big Star’s pop melodies juxtaposed with dark lyrics about the past: “I’ve seen my flame splutter out / I’ve got no guts / I’ve got no heart / You should have seen me in the old days.” You want to pick him up, shake some sense in to him and tell him that with a gentle melody like this he doesn’t need a flame, he has the entire sun on his side. As you think its fading out there’s a Bill Callaghan bridge before a solo citing J Mascis titters around us.

Having found his stride Adams breaks in to a power pop ‘Injured Party’ which is filled with the quirkiness and wry observations of The Silver Jews and the attitude of Folk Implosion. ‘Giving it All Away’ brings it down to a gentle melody which embraces Bill Callahan further and sees the horns return for mariachi flourishes. For ‘Red Carpet’ we see a repetition on influences as Neil Young emerges again, this time though in Harvest Moon mode, with Adams vocals slightly strained, with dancing guitars. As a trio of songs we’ve been able to dance, cry and contemplate, and perfectly capture what Adams must have gone through to reach this stage. It’s a realisation this is a deeply personal record.

After the limp ballad of ‘Sit and Wait’, we experience the craft of creating jangly pop with ‘Spit at Sea’ and ‘Eisableth Frink’. Both of which are part Brendan Benson and part minstrel balladeer spelling out quirky narratives for us to ponder, but ready to give us an answer. The latter in particular is seems like a story which answers its own cliff hangers. Adams sings, “I keep forgetting to think, I’m not the man that I want to be / Some time I’ll be fixing a drink, then a cloud will come over me” , and you start thinking maybe it’s not all rosey anymore, but the melody soon rebuffs any doubts and leaves you feeling teaming with positivity. Album closer ‘Married Woman’ is a wonderfully twee call and response piano duet which encapsulates doubts regrets and hopes.

Everybody Friends Now is a record which has allowed Adams to come to terms with the last decade and analyse the music he wants to be creating. There is an unavoidable leaning towards alternative American indie songwriters, away from any folk or traditional rock elements, and he is more than capable of setting roost in this niche. As it is, the whole record can sound a bit erratic and darts between influences, but for such a song writing talent this is bound to happen as there are so many ideas competing. The confidence not to fall into the trap of donning a waistcoat and creating a quirky English alt-folk record is appreciated, as is turning a small part of Adams’ home Cambridgeshire in to an American ghetto. He will still remain a cult figure, but one on par with the best of our cult heroes.