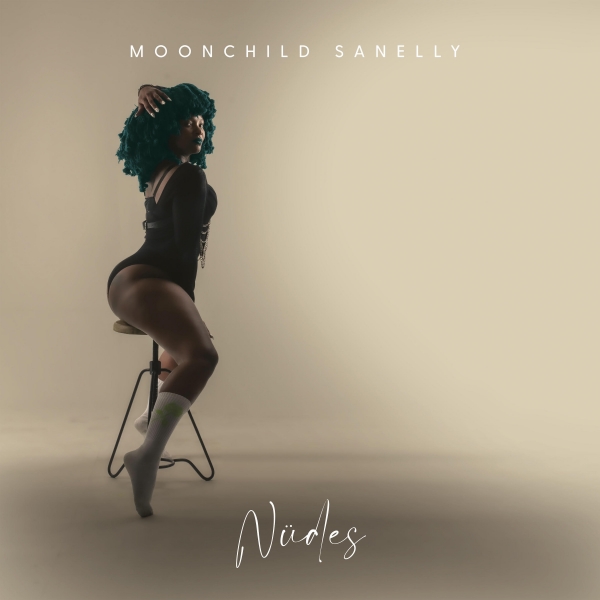 For Moonchild Sanelly, the waiting has been worth it. After spending the last decade and a half honing her writing and performing skills into laser sharp weapons on the Durban poetry and beats scene, this debut international release is the product of an astonishingly confident and accomplished creative mind.

Across thirty effervescent minutes, Nüdes installs Sanelly as the breakout star of the contemporary South African music community - a blistering, technicolour blast from a country that has been crying out for recognition for too long. Sanelly raps and sings with whip-smart, bounding excitement; her lyrics – whether in English or Xhosa – designed as much to topple outmoded social conventions as they are to catalyse dancefloors. Body positivity; sex positivity; genre positivity; it all gushes from Sanelly and pity the poor fool that tries to stand in her way.

"Where De Dee Kat", for example, is a love letter to female libido, an unshameable celebration that is on the one hand playful (its winking title and its climactic chorus of “penis penis penis”) but on the other carries a sober social message (Sanelly recently said, “unless we talk about female desire, rape culture exists”). Of course, it is a track that could not have arrived in the world with any more timely grace, and in a just world it would ride the "WAP" coattails all the way to the top.

"Bashiri" and "Come Correct" are the record’s two most addictive tracks, both sparkling with the vibrancy of gqom, the style of minimal electronic beats that rose from the blend of kwaito and house in the Durban townships during the '10s. It is a more refined sound than the shangaan electro of Nozinja or DJ Khwaya that was the last South African scene to gain some intercontinental traction, but is nevertheless an earthier, more handmade alternative to mainstream contemporary Western house. Sanelly herself describes it as “future ghetto funk”, although she is also not afraid to bring the energy down at times, such as on the beautiful "Weh Mameh", where a textured, plaintive piano line repeats while Sanelly insistently repeats the title as a mantra, her words lapping like the incoming tide.

Sanelly's assertive, take-no-bullshit attitude may not be deliberately provocative but she has still fallen foul of the censors in her homeland, who banned a previous single from radio airplay in South Africa for the sexually explicit crime of listing body parts. The result is now the track "Thunda Thighs" and its accompanying Insta hashtag, a reminder that her sights are set far beyond the small-minded authorities that would hold her back. It hasn’t, for example, stopped her from working with Beyonce on the track "My Power" from Black is King, or appearing on Africa Express or Gorillaz records too. Evidently, Sanelly knows what she wants and she knows how to get it, so the rest of us had better get ready.