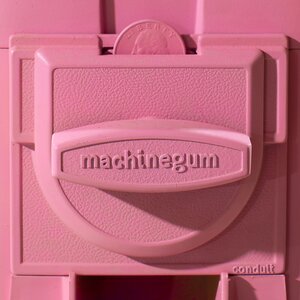 While The Strokes’ triumphant return to festival stages worldwide has been postponed until next year, drummer Fabrizio Moretti has quietly been tinkering away with his latest project, Machinegum.

The artists’ collective, formed by Moretti in 2018, counts on the talents of Nation of Language vocalist Ian Devaney, Erin Victoria Axtell, Martin Bonventre, Delicate Steve, and Chris Egan. They dropped Conduit with very little fanfare whatsoever last December, the first act of an extended exercise in performance that included a live preview show accessed via pink gumball machine. Now, their debut LP is finally getting the vinyl release it deserves.

As they put it, Machinegum aims to problematize the relationship between performer and audience, to create works that produce – and are therefore constituted by – a response from the listener or viewer. Moretti has spoken about how the band’s new video for synth-pop opener “Kubes” seemed to prefigure the age of lockdown, with its crowd-sourced parade of solitary small-screen faces. Composed of clips recorded by fans performing a set of instructions – from brushing their teeth to dancing alone – it stands now an apposite study of isolation in unity and alienation from routine, two rich seams that run through the record.

Conduit plays like a succession of cinematic collages, experimenting with different styles and manipulated motifs. Moretti and producer Jake Aron cut and paste together new-wavy synths, disco rhythms and zombified pop into an altogether impressive – if conceptually restless – debut.

Devaney’s phlegmatic delivery is the cipher for Moretti’s vignettes of neon-noir romance, domestic disaffection, and unrealised futures – all dripping with melodrama. Thick distortion electrifies “Atomized”, a reluctant reconciliation with loss, while the libidinal “Sugar and Vice” is a fun but ultimately shallow cut.

The record’s melange of styles comes into its own by the midway point, unexpectedly heralded by the honeyed new-age trip of “128”, channelling the digital ghost of Enya. “Deep Red” laments the lost potential of a love gone sour, drifting in and out of orbit before the track blasts away into an interstellar dogfight of driving bass and turbocharged drums.

“Act of Contrition” is four minutes of melancholy gothic pastiche set to schlocky horror synths and serrated riffs, before the slick strutting bassline of “O Please” abruptly tears back the smoky drapes. It’s an indulgence, but even here the same sense of estrangement hangs heavy in the air: “I’m not here, I just live here / I’m not myself when I’m around you anyhow”. Its vibe is a world away from “Walking Habits” with its toytown piano interlude, but the pathos still stalks every scene.

As the muscular groove of “City Walls” gives way and the credits roll over the languid marine drive of closer “Knots”, it’s difficult to tell exactly what we’ve been watching. “The moment has passed / It came and went too fast / Lightning never lasts”, croons Devaney. If they stay self-aware and tighten up some of the weaker links, that lightning might just strike twice.