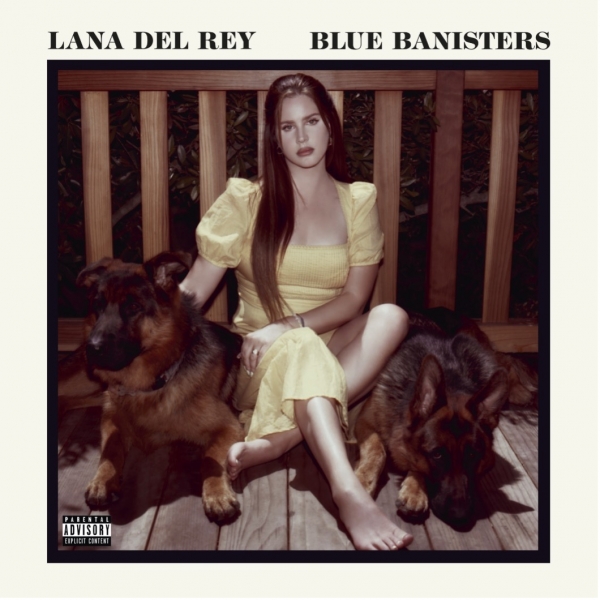 On first impressions, Lana Del Rey’s eighth album Blue Banisters could be seen as a companion of sorts to March’s Chemtrails Over the Country Club. Landing just months later and once again dripping with country and folk influences, it’s the latest in a string of long-players which have seen her ditch over-produced sonics in favour of a timeless, acoustic direction.

Dig deeper, however, and you’ll find this record was years in the making. “Nectar of the Gods” and “Cherry Blossom”, both of which leaked in 2019, can be traced all the way back to the Ultraviolence recording sessions. The former – one of several tracks co-written by her ex-boyfriend Barrie-James O’Neill – finds parallels with “Cruel World”, with Lana proudly declaring “I get wild and fucking crazy”.

While Chemtrails was almost exclusively produced by close collaborator Jack Antonoff, Blue Banisters instead calls upon a wider cast of personnel including the versatile Gabe Simon, fresh face Drew Erickson, and hip-hop heavyweight Mike Dean, who moves out of his comfort zone on “Wildflower Wildfire”. Elsewhere, there are multiple contributions from The Last Shadow Puppets, with whom Del Rey had been working on a fabled collaborative LP: bassist and producer Zach Dawes’ influence frequently resurfaces throughout, while Miles Kane lends his inimitable vocals to the humorous highlight “Dealer”.

Fascinatingly, there’s a cohesion to the album despite its reliance on previously shelved material, successfully positioning it not as a slapdash compilation of archived songs but instead as a carefully sequenced selection of autobiographical numbers past and present. The colour blue, ever-emblematic of ‘the blues’, is a recurring motif, but so is the altogether happier theme of family. Everyone from her sister to her dogs - Tex and Mex - gets a shout-out, while tracks like “Living Legend” and “Beautiful” are oozing with optimism and toasts to good company.

Del Rey has claimed that Blue Banisters is intended to ‘tell her story’ in the sense that it’s a self-contained window into her life. Its stripped-back arrangements further this feeling of intimacy; “Cherry Blossom” and “Beautiful”, for instance, are underscored by barebones piano accompaniments, while the equally life-affirming “Arcadia” features some rare examples of microphone clipping as a result of her impassioned delivery. The unprecedented inclusion of this rough vocal take seems to reflect a conscious decision to make the project as pure and organic as possible.

Naturally, many of the New York singer’s classic hallmarks are on display, too. The call-and-response gem “Black Bathing Suit” plays with rubato in a way that recalls choice cuts from her earlier oeuvre, and the tender ballads present are some of her best. While Blue Banisters is almost entirely devoid of synthetic sounds, its one interlude is a trap-infused reimagining of a composition from the 1966 western The Good, The Bad and The Ugly, an unlikely detour which seems to serve only to remind listeners of her continued appreciation for hip-hop culture.

She still can’t resist the occasional ‘70s interpolation, referencing a Commodores classic on “If You Lie Down with Me”, but there are ultra-timely cultural references here too - nods to “masks off” and “crypto forever” ensure that historians will have no trouble dating this record, even if some of the tracks included are nearly a decade old. Ultimately, while her opus may lie elsewhere in her discography, Blue Banisters achieves precisely what it set out to - free from distractions, it’s a welcome insight into some of her most warm and introspective moments.