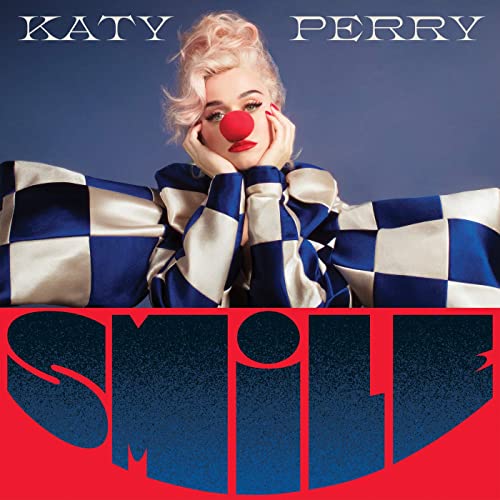 ​​Katy Perry, as a pop figurehead, is someone who can’t seem to do anything right.

When she was delivering pop songs that stand as some of the biggest of the twentieth century, it was the general public that came for her. While the moment she entered somewhat explorative territory, it was the critics. Now, on her sixth outing, comes a perplexing return to, well, something.

The self-awareness of Perry is there from the start in the form of the clown nose adorning her face, and continues to crop up through every track that is both self-defensive and a statement of resilience.

It’s hard not to argue that Perry has been forced into this hand considering the watchful, if aggressively critical eye cast upon her, and her superstar status, but that’s all part of the game, unfortunately. A name like Perry is expected to deliver on all fronts while staying the same forever and changing into whatever it is we want.

Which is why it’s not easy to admit that the difficulty in Smile is being able to get lost in it. Pop music is escapism, which in this day and age is beyond needed, but Smile feels like it’s just existing. It just sits at the table surrounded by Perry’s past, which has some of the aforementioned biggest tracks of the ‘00s, and a couple of toe-dips into new territory which were at least commendable, but Smile just walks the line of enjoyable.

The titular track certainly has bombast to it, with the same message ringing out as in “Firework”, shouting from the rooftops: “now you see me shine from a mile / finally got back that smile”. “Never Really Over” still stands alongside “Daisy” as the big-hitting singles with no lurking sleeper cuts waiting to take over, but a special commendation for “Teary Eyes” with its club-rousing darkness bouncing along while Perry urges you to “keep on dancing with those teary eyes.”

On the flip side, “Harley’s In Hawaii”, while perhaps tongue in cheek, features the inescapable line “When I hula / so good you take me to the jeweller”. “Only Love” kicks in with the ghost of “Higher Love” (most recently revived by Kygo) echoing in the chords, while musical Rent finds its grave being disturbed with opening lines “86400 seconds in a day”, all for a song that holds its heart close for a sincere meaning, but you just can’t believe it.

Is it so wrong for Perry to use an era to get back to herself? Probably not. Given all that’s going on in her life is positivity, and the self-awareness striking through on “Champagne Problems”, let’s just hope this gets it out of her system and the next move, whenever that may be, approaches territory to be remembered.