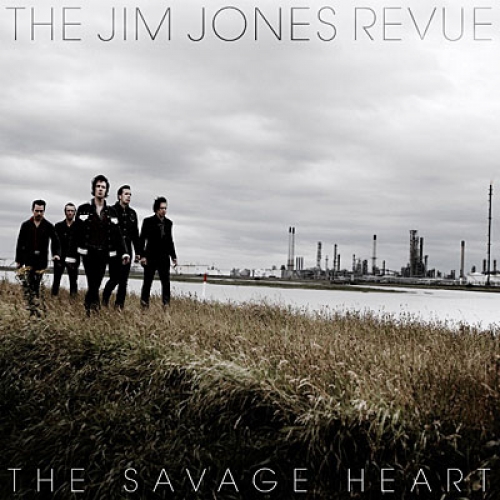 For their third studio album, bluesy garage rock five-piece The Jim Jones Revue have unleashed a piano-heavy Little Richard and Jerry Lee Lewis-inspired follow up to 2010′s Burning Your House Down.

For this outing their fractious rock ‘n’ roll takes a turn back and looks at their rockabilly and ’50s influences and as such features a far more diverse exploration of sounds by throwing acapella and doo-wop into their mix of gritty staples of rock guitar, drums and vocals. Adding new flavours for the ears, latest recruit Henri Herbert’s chattering piano keys take the album that bit closer to a classic rock record for modern times, while at the production helm Jim Sclavunos (of Grinderman/Nick Cave fame) keeps the recording aligned with the ferocity and zeal of the band’s live performances.

The gnarly vocals of ‘It’s Gotta Be About Me’ opens up The Savage Heart in grand gut-punching style, accompanied by Herbert’s heavy thumbed piano chords and thumping bass notes, alongside frontman Jim Jones’ infectious lyricisms and vocal stylings, while follow up ‘Never Let You Go’ rollicks along with toetappingly rhythmic piano and quiet pauses which make way for a paved chaos. As a vocalist Jones is someone you can’t quite place in Lincolnshire, where part of the album was recorded, and for something so far removed from both its time and locale it succeeds in authenticity. The guitars buzz with feedback and fuzz, a little Doors-eque here, a little more reverb-bled there. The album’s midpoint sees a slower and bluesier take on their traditions with ‘Chain Gang’, and as good as this diversity is, the album unfortunately just cannot follow and maintain the momentum of its openers. However while not quite continuing with the bombast of its beginnings the The Savage Heart and Jim Jones Revue – a live band at best and perhaps one of the most visceral around – leave a lot to the imagination on this record which will certainly allow them to maintain the surprise and hype live.

Listen to The Savage Heart