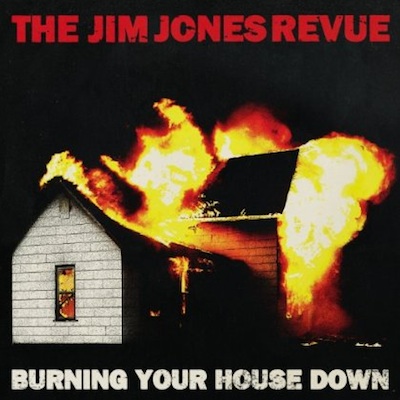 Rock ‘n’ roll is dead… or rather, so we thought. Fortunately five London lads, lead by coarse-throated front man “Jim Jones”, have been busy shoveling its long-perished corpse out of the underground and much like the story of Frankenstein, have brought this former monster back to life. So, time to don the flapper skirts, sculpt the hair into a gravity-defying quiff and get ready to twist and shout the night away as rock ‘n’ roll is reborn for 2010, courtesy of The Jim Jones Revue.

This is not the first time these seedy rockers have resurrected the spirit of Rock ‘n’ Roll. Their self-titled debut received vast critical acclaim in 2008, leading to an extensive tour around Europe and famous endorsement from Jack White and Mick Jones to name but a few – meaning that this time around these cockney hell-raisers are faced with the task of impressing an even larger audience – a daunting task for most, but, with this forthcoming release in their arsenal, impressing the masses will not prove a problem.

Upon pressing play and unleashing the filth-ridden brute that is Burning Your House Down, the listener is greeted by a violent thump of the snare and the juttering twang of distorted guitars chugging through standard Rock ‘n’ Roll chord progressions. This gentle introduction is misleading however, as the listener is about to be launched into an aural battlefield, whereby the offensively bright piano fights for dominance against an army of impenetrable guitars – a common theme throughout the record and one that is reminiscent of such Rock ‘n’ Roll legends as Little Richard – an apparent influence on the band’s sound and particularly the vocal style of Mr. Jones.

The driving energy felt from the outset can only be equated to an unstoppable steamroller, crushing its victims with immense force and seamlessly transferring from track to track with no real decline. This high energy is demonstrated particularly well in ‘High Horse’, a foot-pumping ‘boogie-woogie’ piano assault lead by Jones’ growling vocal line and when he spits that he’ll “pull you back down from your high horse” you are inclined to believe him – not for the first or last time on the record due to his passionate and, in the true style of rock ‘n’ roll, fiendishly obnoxious vocal delivery throughout.

Highlights are a-plenty throughout – with tracks such as ‘Big Len’ exuding a thug-ish atmosphere as an aggressive guitar riff and pounding drums aid Jones in reinforcing his message that he’ll “Fuck you up”. Similarly, the title track serves as the perfect scream along anthem with a buzzing, snarling bass line and roaring drums that get the fists pumping and oozes attitude – offering a mesmerising fusion of punk and clattering honky-tonk piano. ‘Shoot First’ allows Elliot Mortimer’s frantic piano skills to be showcased amidst a less guitar-heavy backing band – adding variety to an occasionally overly distorted sound whilst still containing an addictive chorus.

Whilst at times the more casual listener will find themselves yearning for the ensemble to stray from the slightly limiting standard rock ‘n’ roll blue-print they have strictly adhered to, this stripped down structure also creates impressive authenticity. The album acts as a musical time machine, transporting the listener back to the sleazy, smoke-stained saloon bars of the ‘50’s where they are treated to no-holds barred rock – complete with improvised piano bashing and elaborate, punishing guitar solos – both of which are executed with such unhinged zeal that it would be safe to assume that pianos were harmed and fingers reduced to stubs during the recording of this release.

This loyalty to the old-fashioned does pose its disadvantages in a practical sense however, with all tracks having in common an inherent static buzz and an occasionally unbalanced mix, particularly on the vocal tracks, meaning some clarity is lost and lyrics indecipherable in parts – which, despite being more true to the original rock ‘n’ roll records the band have vastly succeeded in emulating, will frustrate listeners unfamiliar with the genre looking for more polished production.

So then in conclusion: the sound is raw, the energy is raw, the production is raw and, no doubt after the abuse it has experienced over the course of the album, Jim Jones’ voice is raw. Burning Your House Down truly is rock ‘n’ roll at its simplest, yet finest form – the infectious nature of the choruses and hypnotizing riffs as well as the general feel-good, party atmosphere generated will ensure that, as long as these guys are around, we won’t be needing to dish out funeral expenses for Old Lady R’n’R for a good while yet – she’s here to stay.