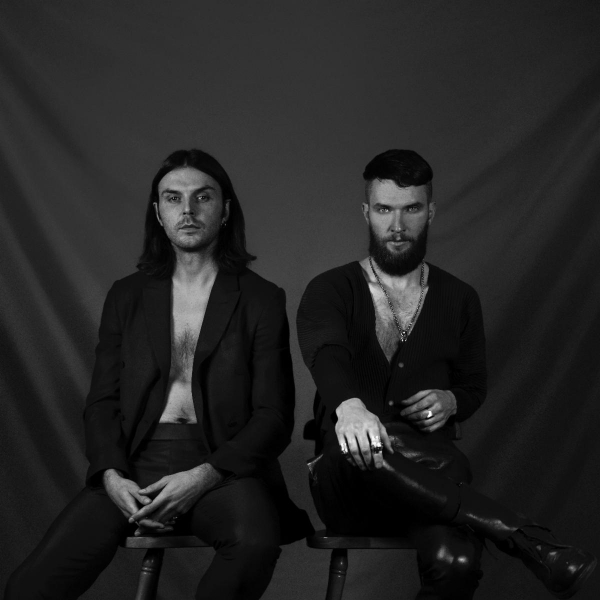 You can trace goth-pop duo Hurts’ career trajectory through their album covers.

Their first album featured the lads, Theo Hutchcraft and Adam Anderson, in sleek, formal attire with earnest looks on their faces. In the decade since, they’ve been stoic and gloomy (Exile), walking through a lush pink field (Surrender), funereal against a blood-red backdrop (Desire) to this new one – Faith – which is the most striking of them all.

Faith finds them both in black (naturally), but wilder, freer than we’ve ever seen them before. Hutchcraft is lion-maned and bushy-chested (evoking Dave Gahan circa Songs of Faith & Devotion), while Anderson’s thousand-mile stare and leather trousers suggest more than a hint of danger to be found within.

Appearances, certainly in this case, can be deceiving. This is the glossiest, most well-produced pop album the boys have ever made. Most of the tracks here feature moods and sounds that have been crafted with utmost attention to detail. “Somebody”, which splits the different between Imagine Dragons and OneRepublic, is a sweaty, sexy anthem that swaggers, rolls, and grinds.

“Voices” is sonically diverse, drawing from both country and electro-pop, and swirling both influences together with the band’s signature gloomy edge. When a choir pops up to assist them on “Slave to Your Love”, the richness and intensity of their sonic backdrop is pushed to its fullest potential. “Fractured” is another highlight – and one of the only tracks on the album that matches the cover. It’s a pitch-black, sexy slice of industrial pop that glitches and beeps and bangs around in the darkness. Arguably the finest cut on the album is “Redemption”, which is soul-baring, complete with God-pleading piano-led grandiosity made flesh.

In the decade since their first album, one of the main criticisms levelled at Hurts has been that their albums are all a bit same-y, and that they’re not enough of any one thing to ever truly capitalise on what makes them great. The simple explanation for all of that is that they are, have been, and always will be, a pop band. Their pop sensibilties have always been plain as day – remember Kylie Minogue featuring on their debut?

Faith is a very, very good album – most likely their best since their debut. There’s something for everyone: if you’ve enjoyed them before, you’ll enjoy them again, and if this happens to be your first Hurts album experience, you’re going to have a great time. Hurts are one of the most underrated bands of their generation, and Faith is just another stellar example of their intoxicating power.