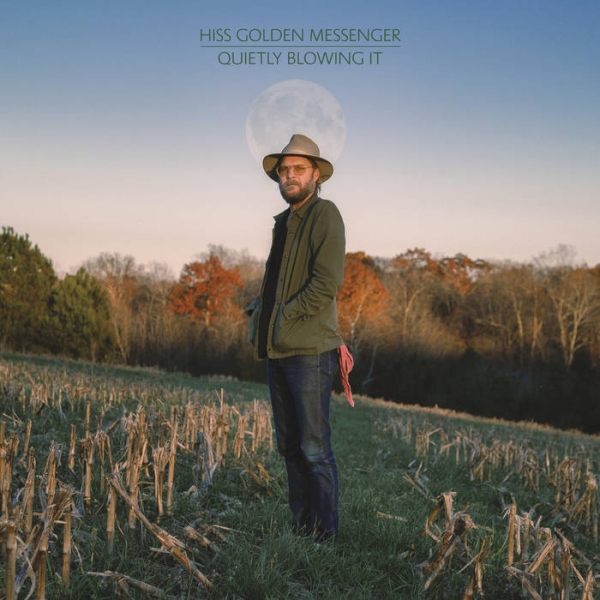 MC Taylor, the man behind Hiss Golden Messenger, is a reggae obsessive (as well as loving the Grateful Dead). He makes killer playlists, throws out recommendations on Instagram, and takes any opportunity to let folks know how great reggae is.

While his music is far from reggae – more of a feel-good, cosmic kind of Americana – it’s certainly imbued with the same narcotic, all-consuming sense of oneness with some kind of force larger than ourselves. Taylor’s is a spiritual music, a reflective and contemplative music. It’s also ideally suited for this post-lockdown haze we’ve all been stumbling into this summer. Each of his studio albums, including 2019’s Grammy-nominated Terms of Surrender, has shown him to be a singular songwriter, cut from the same cloth as Springsteen and Petty and Dylan but unique and thrilling in his own way. Although the genre he pursues is old, his approach is completely fresh - including on his tenth outing, Quietly Blowing It.

As it turns out, the album was inspired by Taylor’s decision to cancel an Australian tour in early 2020, and take some time to recover from the sheer exhaustion of being out on the road in the Trump era. When the time came, however, he surrounded himself with collaborators and friends: “Songwriter Gregory Alan Isakov, songwriter and Tony Award–winning playwright Anaïs Mitchell, multi-instrumentalist Josh Kaufman, Dawes’ brothers Taylor and Griffin Goldsmith, and his oldest musical confidant Scott Hirsch.”

Opener “Way Back in the Way Back” is charmingly simple and deceptively rich, with smooth soul keyboards and crisp percussion providing gentle propulsion to the brass and silky vocal arrangements. “The Great Mystifier”, which splits the difference between gospel Dylan and mid-70s Grateful Dead (check out the solo), is infectiously upbeat and gently groovy.

“Mighty Dollar” leans heavily into smoky, sweaty funk – which makes total sense, considering that Taylor gave a shout-out to Sly & the Family Stone in an essay he wrote and released in the period preceding the release of the record – while the title track, which follows, strips out the heat and muscle but fills the gap with ambience and jazz-inflected somnambulant keyboard washes.

In 2021, it’s becoming increasingly difficult to find music made in earnest and with love. So it’s a great pleasure to find that Quietly Blowing It contains not one jot of irony, not one atom of insincerity. This is an honest, open and ultimately powerful collection of careworn and transformative rock tunes made to soothe the wounds of the past few years and prepare us for the bumps further on down the road.

In its own way, Quietly Blowing It is great just like how the first few Paul McCartney solo records are great, or Tom Petty’s Wildflowers and Bob Dylan’s New Morning are great, or even albums by contemporaries like Laura Marling and Waxahatchee are great – it’s just pure, no bullshit emotional sincerity made for folks who need to feel a little connection to the wider world, to a greater consciousness. Best enjoyed often and amongst friends.