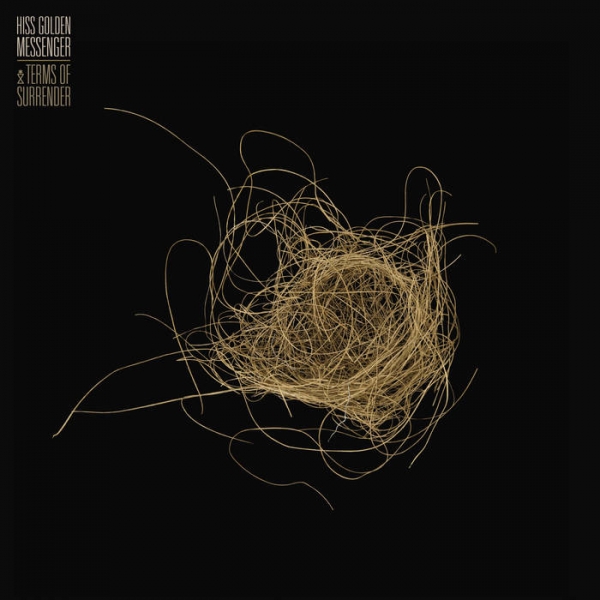 There’s barely any great shortage of songwriters drawing from the great American music tradition. What makes MC Taylor - the Durham, North Caroline-based musician at the core of the ever-evolving Hiss Golden Messenger collective – stand out amongst the Americana ranks is his ability to render the time-worn base materials into a singular musical voice. This alchemic ability glows brighter than ever throughout Terms of Surrender.

On the surface, little has changed since we last heard from the ever-prolific Taylor. Musically, we're at the crossroads where different strands of American roots music - folk-tinged songwriting, gritty gutbucket rock 'n' roll, tear-stained country, highway-guzzling FM radio grooves, southern soul and swampy funk - meet and melt into one another. Lyrically, Taylor's continues to hone in on the harsher realities of what it means to catch a seemingly unobtainable dream (in his case, making a living as a working musician), never more beautifully so than on the shimmering "Happy Birthday, Baby", a careful balancing act between sentimental devotion and self-flagellation written for Taylor's five-year old daughter as an apology for "all those miles that I roam". As with 2017’s Hallelujah Anyhow, there are occasional breaks from personal ruminations for defiant references to trouble afoot in the world. "Another year older / debt slightly deeper / paycheck smaller / goddamn, I need a teacher", Taylor declares during the propulsive opener "I Need a Teacher". Inspired by teacher protest against cuts to education funding in North Carolina, it’s one of a handful of tracks here that sounds like it was custom-built for heavy rotation on the radio without ever losing sight of the grit that Taylor specialises in.

Recorded in the studio of The National's Aaron Dessner and featuring the backing vocals of Jenny Lewis in a prominent support role, Terms of Surrender seems somehow sharper, more consistently intense and inspired than Taylor's past output: which is quite a feat considering previous albums include gems such as 2016's wide-screen Heart Like a Levee and the sepia-tinged mysteries of Poor Moon (2011).

Although it isn't Taylor's style to go fully confessional, there are multiple relatively easily decoded references to various forms of instability, unease and inner turmoil, as well as - this being a HGM record - enduring hope, perseverance and love. In compelling contrast to the darkness that hovers over much of the material, the arrangements glimmer with unusual levels of warmth, nuance and beautiful detail.

Whereas Hallelujah Anyhow resembled an audience-less recreation of HGM's live sound, Taylor and co-producer Brad Cook (Bon Iver producer and collaborator, formerly of Megafaun) use the space and details of the performances to emphasise the mood of the songs more effectively than ever before. For evidence, witness the stark yet still somehow cohering contrast between the guitar-crammed swampland vibes and screeching harmonica of the powerfully funky "Whip" - hints of the late Dr John's Gris-Gris, perhaps - and the skeletal beauty of the closing title track, a humbly majestic confessional that nods towards recent works by Nick Cave and The Bad Seeds and features one of HGM's most indelible melodies, which is gradually allowed to sink into an ocean of electronic - fittingly, really – hiss that could easily go on for much, much longer without anyone complaining.