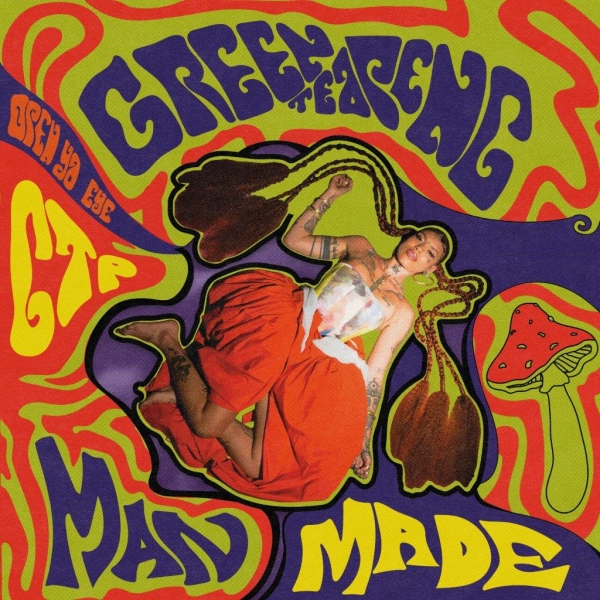 As opener “Make Noise” chimes out the lyric: “This is for the collective and not for the culture”, it acts as a mission statement for Greentea Peng’s debut album Man Made.

Bold and brazen, it sets the precedent for the remainder of the album – a deep and emotionally charged welcome to her world. A spiralling yet graceful fall down the whimsical rabbit hole.

Man Made's key drawing point comes from its medicinal and hypnotic persona, aided by Greentea’s irresistible sage vocals. Lead track “Kali V2”, visualised through a captivating red tinged video shot by ABOVEGROUND, is a song about death and rebirth. A "burning of the old and the rising of the new" to use Greentea’s words exactly - it is the perfect nod to the Hindu goddess Kali Ma, from whom the song gets its moniker.

The majority of Man Made carries weight within its words - politics being the main topic of conversation. “Be Careful” with its whistling flute layered over a swaggering stomp, sings “I’ve gotta be careful with my words / they’re very powerful / I’ve found out” and “now my shit’s gotta be profound”. In a similar vein, “Free My People” featuring the delicate vocals of Simmy and Kid Cruise, echoes “we don’t wanna chat until my people free” – a heavily political song hidden amongst an infectious groove.

There are a myriad of influences within this album that bond together in simple harmony. From the sensual neo-soul displayed on the hip-swaying “Suffer” to the jazz undertones of “Satta” brought on by some mesmerising saxophone, it is refreshing to know that not one music style prevails over the other. It is rich in variation, bringing to the table multiple states of being. Many songs shine bright, but latest single “Dingaling”, which whirs and spirals with guided disarray, emanates a warm and comforting glow.

There is a clever science behind the hypnosis. During the turbulent year we’ve all suffered through, Greentea and her band, The Seng Seng Family, retreated to the country and recorded the album in a 432 Hz frequency - a pitch that falls a semitone below the music industry standard - which is thought to vibrate a healing energy. A further demonstration of Greentea’s undying dedication to her individuality and spirituality.

An album that is truly magical, Man Made is a stand-out debut. After giving everyone a bite of the fruit with previous releases “Downers” and “Hu Man”, this is the full showcase of her impeccable talent.