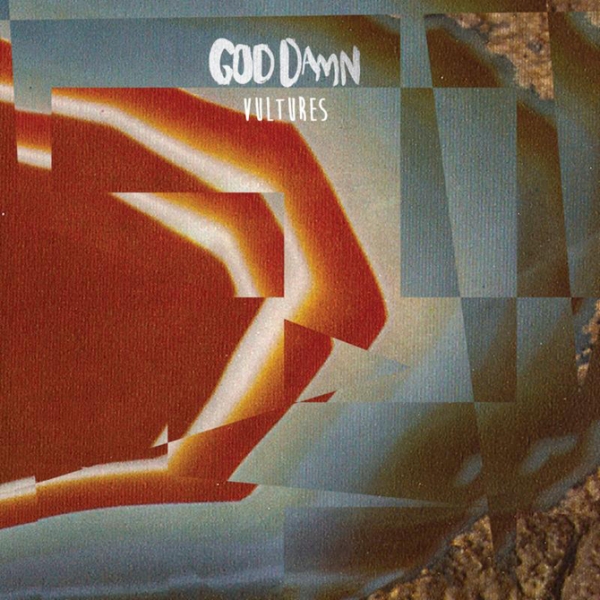 God Damn’s story is a long and complicated one. Heralded in their hometown, it’s nigh on impossible to find a band that inspire such ardent devotion, or that work so hard to attain it. At long last, that toil has paid off. With the release of their debut album, the Black Country duo are blasting out of the Midlands, and becoming one of our country’s most ferocious national treasures.

Fired by a cataclysmic thunder, Vultures is the most overpowering debut you’ll hear this year.  From the opening ambience of “Horsley Fields” – the sound of the band opening the gates to their Wolverhampton lock-up – through to the soothing waves that usher “Sullen Fun” to a close, Vultures is a rollercoaster ride of deafening thrills and heart wrenching chills, and it doesn’t let down for a moment.

Recent single “When The Wind Blows” ricochets the album to a searing start, Thom Edward’s distinctive shrieks and Ash Weaver’s characteristic drum work pummelling the record into life. The infectiously meandering “Horus” also features, alongside an adapted version of earlier release "Shoeprints In The Dust" (here titled "Shoeprints"). Enticingly echoing, these tracks are primed to ensnare.

Title track “Vultures” is God Damn at their most quintessential. Self-described as the track they’re most proud of, rapid-fire rhythms pummel and abate, guitars squeal and distort, vocals screech and soar, drawing you into a swamp of riffs you can’t resist being submerged by.  If “Vultures” is the duo at their most iconic, then “Skeletons” is God Damn at their most sprawling. Reimagined from their debut EP Heavy Money, the track is reinvigorated, resounding, and gut-wrenchingly rousing. The fragile introduction of acoustic guitar and vocals resounds delicately before detonating into thunderous refrains and thrashing percussion, tearing through your veins and leaving you drained.

Really, the album could end there, but God Damn demonstrate they’re capable of so much more. The sauntering percussion of “Maladie Melodie” showcase the duo at their most contagious, whilst the scalding refrains of “We Don’t Like You” flaunt a savagery that’s undeniably attractive. Instrumental offering “The Cut” is as stadium-ready as the band can be, and “Sullen Fun” as soft and intimate as they come.

Equal parts feral and tame, God Damn are masters of the noise they create. Whether it’s dark and driving or elegant and echoing, Vultures is at all points capable of igniting a spark in your gut that’ll burn until there’s nothing left. God Damn are playing with fire – and there’s no better release to risk the blaze for.